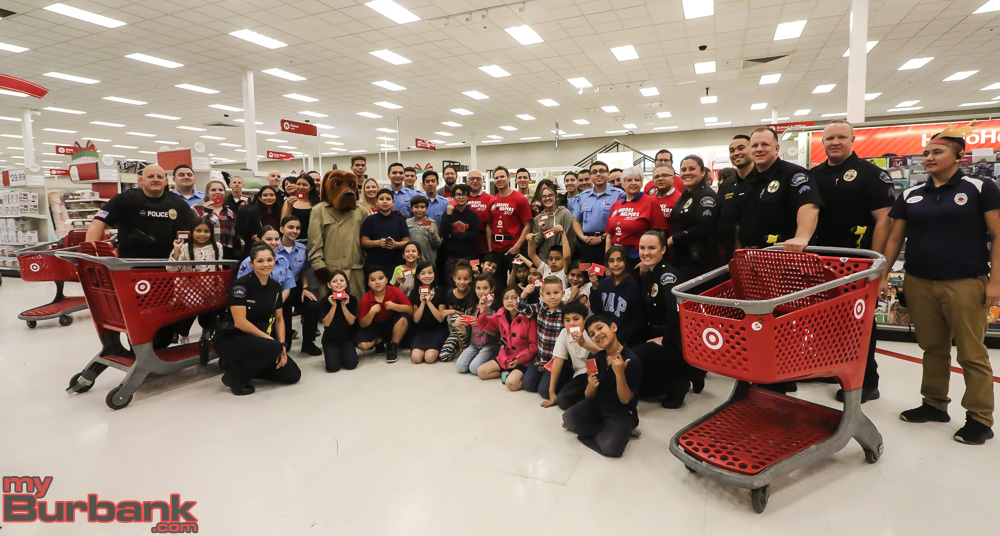 Every year around the Holiday Season, the Burbank Police Department, in conjunction with local partners such as Noon Rotary and community members, puts together a small event meant to benefit less fortunate children in our city. The program began in 1980 and has since continued every year. The Burbank Police Department teamed up with the Boys and Girls Club and a local Target store to grant less fortunate children the opportunity to receive and give during the holiday season.

A group of thirty children is selected from the Boys and Girls Club based on their family income and needs. From there, a date is set to shop at a local store. This year, Target, located in the Empire Center, partnered with the Burbank Police Department and the Boys & Girls Club to sponsor and host the event.

According to Officer Angela Burrows, “approximately 20-25 uniformed personnel who have volunteered their time to take these kids on a shopping spree.” The personnel range from police officers, cadets, and explorers. The spree begins when each child is given a $200 gift card to shop at Target. From there, “the Officers will then take them shopping and help them select gifts for their families. After the shopping event,” explains Officer Burrows, “they are then invited to a catered dinner by Wood Ranch at a local church.”

During the dinner at Wood Ranch, the children are treated to special appearances and entertainment by both McGruff the crime dog and Santa Claus. Along with support from the Burbank Police Department, Target, and the Wood Ranch Grill, organizers of the event “rely on private donations from Citizens in addition to donations from clubs, organizations and businesses throughout the city of Burbank.”

For Officer Burrows, this ‘Heroes and Helpers’ is a special event. “Christmas is my favorite time of year, so this event holds such a special place in my heart. Let’s just say my role is rewarding and I am extremely fortunate to participate this year.” Furthermore, this event also bridges the community directly with the Burbank Police Department. “I know it is significant in these children’s lives,” explained Officer Burrows, “Their opinion of the police is forever influenced in a positive way.” As to what Officer Burrows looked forward to the most for this year’s ‘Heroes and Helpers’ event? “Seeing the look on their faces is priceless.”

The Burbank Police Department explains that the “goal of the ‘Heroes and Helpers’ event is to provide less fortunate children with a friendly holiday experience they won’t soon forget. Although the event is for the children, Burbank Police personnel are deeply affected by each child’s circumstances and are always touched by their interaction with them.”

This year’s ‘Heroes and Helpers’ proved to be a success for everyone involved. It should also be noted that along with Target, the Burbank Rotary also sponsored the event.

Thanks to @Target for a tonight's Heroes & Helpers shopping event benefiting children in need. These kids will now be able to provide their families with wonderful gifts this holiday season. Thanks also to sponsors @BurbankRotary @BGCBurbank & Community Bank of Burbank pic.twitter.com/fSjy4Jx4FI

To find out more about the Boys and Girls Club, as well as upcoming events, you can find more information on their Twitter profile.

Students Show Off Their Wearable Art at Trashion Show Event