On June 19, 2018, JAY BOGAN was at Burger King, expecting to enjoy a nice meal.  He wasn’t expecting to witness a maniac suddenly attack an elderly man and repeatedly stab him in the face.  But for Bogan, to see was to act.  He immediately rushed toward the assailant, hitting him with a chair and wrestling him to the floor.  Bogan proceeded to disarm him and keep him pinned until the police and paramedics arrived.

The elderly man had sustained serious injuries, but Bogan’s courageous intervention had saved his life.  Bogan had received minor injuries, a fortunate outcome given the risks of violent confrontation.  But when the police acknowledged his heroic actions, Bogan demurred.  “Isn’t that something everyone should do?”

But risking your life to save that of a stranger is not something that everyone does.  And when a citizen actually takes that risk, it is a cause for public recognition from those who make it their profession to protect and serve.

And so Bogan received the Citizen Award for his “selfless service to the community” at last Thursday’s Burbank Police Awards Luncheon at the Marriott Burbank Hotel, hosted by the Burbank Police Foundation.

Among those honoring Bogan was Officer of the Year JOHN EMBLETON.  He had been driving along the I-5 when he came across a bad traffic collision.  He found out that a murder suspect had fled from Sacramento hours earlier in one of the vehicles.  The suspect realized he had been made.  He fled on foot.  Officer Embleton gave chase and nabbed the suspect before he could do any more harm.

Officer Embleton joined the Burbank Police department in 2005 and is currently a member of the SWAT team. Since 2010 he has also been a K-9 handler, working closely with his four-legged partner Bran.  His peers cite his “relentless work ethic and positive attitude.”

Both Police Sergeant JAMAL CHILDS and Jailer KIRK DAVIS received Lifesaving Medals for “actions resulting in the saving or preservation of human life.”  On December 20, 2018, Sgt. Childs saw a man climb over a railing and sit precariously on a sign overlooking the I-5.  At a time when many were enjoying the holiday season, others were feeling only suicidal despair.  Sgt. Kirk recognized the sign sitter was one of them. He quickly grabbed the man and pulled him to safety.  If the suicidal man had fallen onto the freeway, he could well have ended more lives than his own.

When Jailer KIRK DAVIS ushered a distraught inmate into the cell after booking for domestic violence, his instincts told him to check up on him frequently.  And indeed, within minutes the inmate had turned his shirt into a noose around his neck, with the other end wrapped around a nearby faucet. But Davis, true to his gut feeling, arrived in time to stop the inmate from hanging himself.  Paramedics confirmed that the inmate had sustained only minor injuries.

Other awards were directed to outstanding team efforts. “For extraordinary efforts earning the esteem of your colleagues and community,” several officers received the Professional Esteem Award for their work as members of the Burbank Police Gang Unit: Officers DUSTIN RODRIGUEZ, HARRY MARKEY, PAUL FRENCH, COREY CHEFALO, AARON DENNING, and PIETRO PIRA.  Since 2016, these officers have been fighting gang-related crime at the street level. They’ve succeeded in reducing gang graffiti by 83%, in making over 600 arrests and in significant recoveries of illegal firearms.

For her work in handling the high volume of court summons and navigating the Superior Court system generally, Police Technician HELEN QUACH was honored as Non-Sworn Employee of the Year.  Her colleagues universally recognize her as “knowledgeable, responsible and reliable.”

Recognition also extended to City employees who have offered substantial assistance to the Police Department.  As Mayor Emily Gabel-Luddy remarked, “It’s a testament to the Burbank Police Foundation and all their supporters that they recognize staff from other City departments who assist police in catching perpetrators and solving crimes.”  She continued, “And it’s a credit to our whole City and the men and women of the Burbank Police Department.”

In view of the ongoing adoption of improved technology, it was particularly appropriate that the awards luncheon remembered retired Police Chief GLEN BELL, who had died last January.  Serving as Burbank’s Police Chief from 1982 through 1990, he had been instrumental in pioneering the Police Department’s transition to modern, digital-based methods in reporting, data gathering and data analysis.  On his watch, he had also instituted the gang detail and the helicopter program.

Volunteer of the Year recognition went to KAYE NORRIS, who has been volunteering for the Police Department since 2007.  She has helped with a variety of activities, including answering the phone and helping with the citation paperwork.  The other volunteers look forward to “Kay Days,” when her unfailingly friendly and upbeat demeanor brightens the whole office. 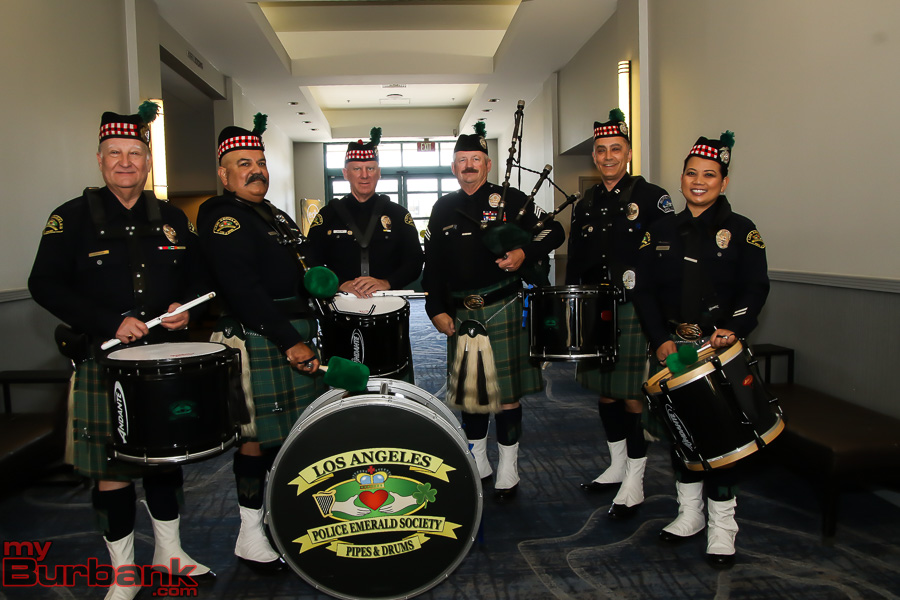 Receiving “Gold” recognition for 500+ hours of volunteer service were ELAINE STEVENS and the aforementioned KAYE NORRIS. 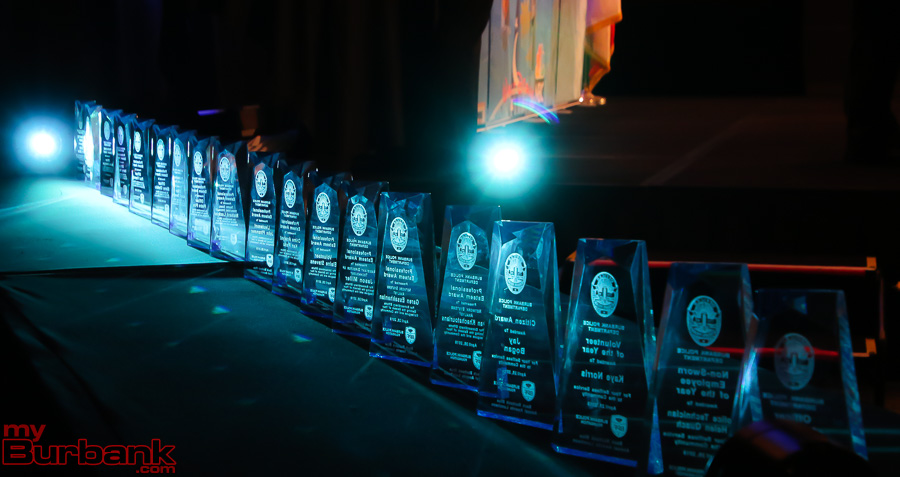 The awards ceremony was the fifth hosted by the Burbank Police Foundation, a community-based organization seeking to cultivate closer partnerships between the Police Department and the community it serves. Judging by the caliber of the award recipients, the partnerships are close indeed.