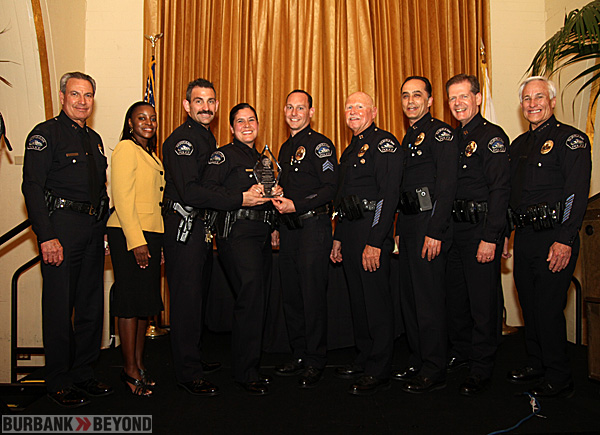 The partnership addresses the mental health issues of those that are affecting quality of life issues for our citizens. In addition, the team works closley with numerous groups within our city to obtain much needed resources for the affected individuals.

The POALAC Award Presentation on March 21 went to the Burbank Police Department for the following:

The Burbank Police Department (BPD) entered into 2012 facing a daunting 153 percent increase in service calls involving mental health underpinnings. BPD aligned with the Los Angeles County Department of Mental Health (DMH) and created a co-response police/mental health clinician model (Burbank Mental Evaluation Team) to effectively intervene and manage these extraordinary requests for service. Resultant from the implementation of this co-response model, the BPD realized significant benefits to this contemporary model. Specifically, the many chronic offenders who have burdened various public and social services have been the focal point of a strategic intervention plan that included the pursuit of sustained care in lieu of transitory care. With effective collaboration with the City Attorney, DMH, patient families, and a preemptive intervention approach to managing these high-risk interventions, the results have exceeded the Department and community’s expectation.

The award was presented to:

The Burbank Police Department and the Los Angeles County Department of Mental Health has joined together in a cooperative effort to provide the city of Burbank and the community we serve, a mental health team to address the growing needs of those suffering from mental illness and homelessness. Our two agencies developed the Burbank Mental Health Evaluation Team, known as BMHET.

BMHET is comprised of police officers from the Burbank Police Department and a licensed Department of Mental Health clinician. BMHET responds to calls for services or other police contacts that have mental health underpinnings. BMHET is utilized to evaluate subjects who appear to have mental health disorders.

Once on scene BMHET determines if further mental health treatment is required. They then utilize the numerous resources that Los Angeles County Department of Mental Health can access, as well as apply for holds, per 5150/5585 WIC.

BMHET also conducts case management with those in the community. BMHET focuses their efforts on helping those that consistently require our services to alleviate patrol and other police services. BMHET also coordinates with the Investigations Division to assist in proper prosecution through the mental health system and criminal courts system.

Burbank Community Comes Through with Toys, Food, and More for the Holidays