Electronic subpoenas, iPhones, apps and an electronic process to review policies are among the ways technology is changing how Burbank police conduct their work.

“Technology is starting to touch every single aspect of law enforcement,” said Lt. Armen Dermenjian, who has been overseeing the technology needs of the department for about five years.

“Apps are specially designed for law enforcement that would be helpful for detectives,” Dermenjian said. “There are apps available for covert operations and apps for informational resources.”

“We went from having hard copies of the Legal Sourcebook, accessing it online on desktop computers and now having them available on iPhones,” Dermenjian said.

The Legal Sourcebook is a resource for legal information and covers Miranda rights, search and seizure laws and laws of arrest, he said.

Dermenjian said there is also an app for detectives that helps with recordings.

“Before [detectives] needed to have special equipment,” he said, adding that “now they don’t carry anything extra – the phone can be that equipment.”

Police are also in the process of implementing an electronic subpoena system, Dermenjian said.

A company called Webiplex works in cooperation with the Los Angeles County District Attorney’s office to generate electronic subpoenas, which Burbank has been using for a month, Dermenjian said. 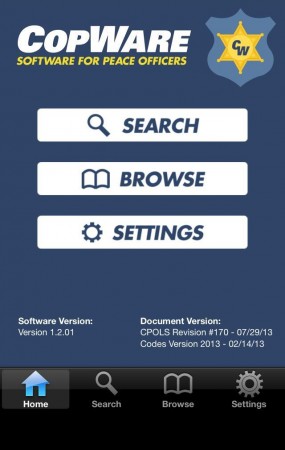 The web-based DocuPeak platform is used by a variety of sectors, including government, education and healthcare, according to the Webiplex website. The city of Inglewood is among its users.

The program also tracks when the officer saw the subpoena and when it was served, Dermenjian said.

Burbank police are also being publishing a new policy manual.

“We published over 170 new policies in the last year,” Dermenjian said, adding that these are newly updated policies to conform to best practices, and in some cases, police did not have a particular policy.

And because policies are being published electronically, officers are alerted of the new policy and log into the system, read it and acknowledge reading it, he said.

The technology has been significantly enhanced with high definition cameras, he said. Police have tested a few cameras and would need about $200,000 to $250,000.

One of the most significant technology projects that the Police Department will be considering in 2014 is an electronic scheduling system, Dermenjian said.

“It will provide a department-wide calendar, which will enhance operations, it will improve overtime management, it will allow for more detailed tracking of staffing levels, and it will automate many time and attendance processes,” he said.

“A lot of work is being done,” Dermenjian said. “We are going through a lot of changes – some are self generated, some technology is pushing us in various directions.”

But technology has many challenges, he said.

“We have to be careful when we implement new technology because we deal with a lot of private information and secure databases,” he said. “Any time you use a mobile environment it creates problems with respect to security.”

Dermenjian said the department is almost to a point where they will need a technology unit.

Even though crime levels have not changed much in the city, there’s a need for more staffing now because of all the technology being implemented and used, he said.

“Someone has to support it,” Dermenjian said. “From the outside it may not look like there is a need to support staffing in the police department, but technology is creating that need.”

Bike Month is Right Around The Corner