The City of Burbank Police unveiled a new mural at its station last month commemorating police who lost their lives in the line of duty.

The wall-size mural depicts officers and deputy marshals from various eras with the vehicles they used and dressed in clothing and uniforms from their time period.  The mural’s subjects: Marshal Luther Colson, Deputy City Marshal Robert L. Normand, Officer Joseph R. Wilson, Officer Richard E. Kunkle, and Officer Matthew Pavelka, stand alongside each other with two of the officers sitting on their motorcycles.  Each officer stands before a backdrop of the Burbank police station from their time period.

The ages of the deceased range from middle-aged to early twenties.  The five officers and deputy marshals are the only Burbank police force members to be killed in the line of duty from the 1920s to the early 2000s.

The mural was the brainchild of Sergeant Mark Stohl an 18 year veteran of the force.  The tall, unassuming, soft-spoken man felt the station needed a memorial to the fallen.

“I wanted it to be something that would be able to integrate all of the officers based on the fact its ninety years [the age of the Burbank police], and the differences between some of them, into one cohesive piece,” Stohl said. 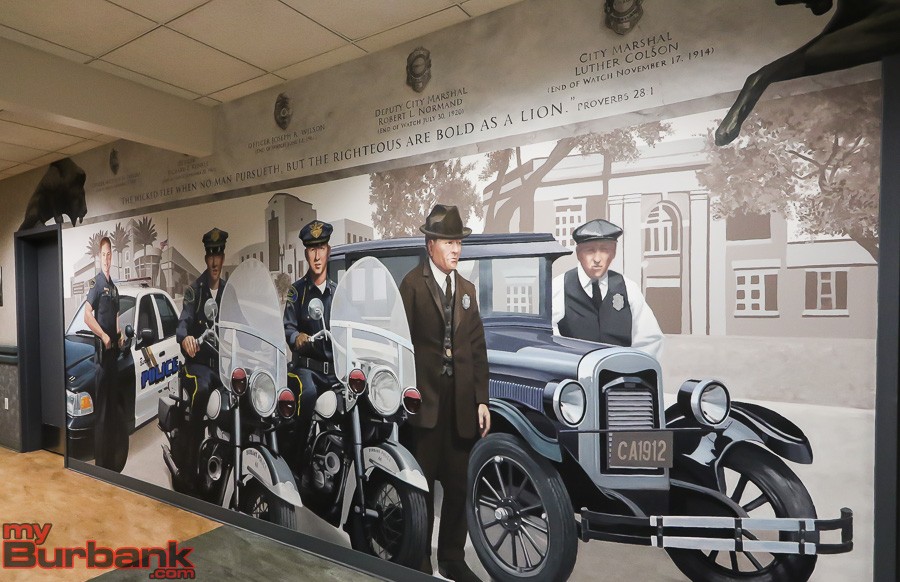 Its location is in front of the station’s back entrance doors. The smiling subjects of the colorful mural greet police officers as they arrive to start their shifts.

Stohl said, “We have a lot of younger officers here who may not know the history.  That’s the reason why we chose this place to put it, so every day when you come into work you have to pass by it.”

“It’s a good way to remind every one of the sacrifices these people have made,” Stohl said.  “To hope that no one else has to be put up on the wall.”

At the top of the mural, painted by artist Jeanine Hattas Wilson, are the name and date of death for each officer and marshal appear on an image of what would have been their badges.  On either side of the painting, lions appear to be standing guard over the police officers.

Present in the mural is a cheerful reddish hair twenty-something officer, who looks to be the most confident, is Matthew Pavelka who was shot and killed during a traffic stop in 2003. He had been on the force a year. 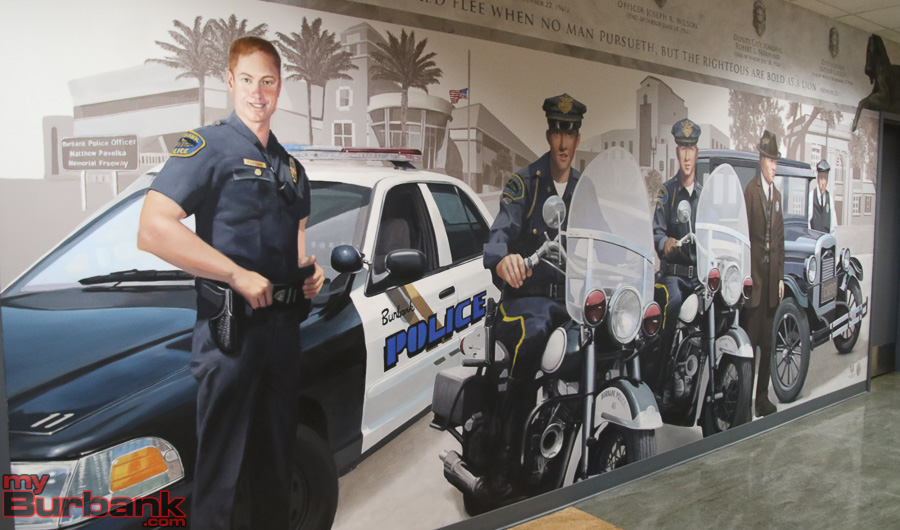 Stohl’s inspiration for the mural came from a small memorial to the fallen officers in the administrative section of the station.

“In my opinion, it was lacking.  It just wasn’t the type of memorial I thought we should have for the sacrifice these people have made,” Stohl said quietly.

The Burbank Police Officer’s Association and the non-profit Burbank Police Foundation both paid for the mural.  Lieutenant Claudio Losacco who sits on the boards of both groups was the facilitator for obtaining the funding.

“He came to me and asked how can we make this happen,” Losacco said.  “He went to both the Association and the Foundation and pitched it [the mural] and went to the company who actually did the work, got a quote from them, got some exemplars and both the boards decided, yes we will spend the money to make it happen.”

“The response has been overwhelmingly positive,” Stohl said thoughtfully.  “That is what it’s here for, to honor their memory.  To let people remember this is a dangerous job”

Burbank Police have also produced a time-lapse video of the mural that can be seen here.

Editor’s Note the excerpt was changed as Sgt. Mark Stohl is currently with the Burbank Police Dept.