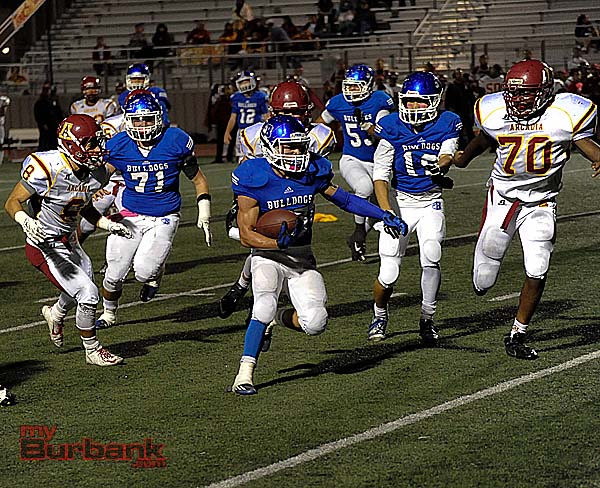 It took the Burbank High football team a half to tally five touchdowns, en route to a 56-14 pasting over Arcadia in a Pacific League skirmish on Thursday night at Memorial Field, but the Bulldogs may have had something else on their mind.

In a week at this same venue, Burbank (6-3 overall and 4-2 in league) and Burroughs will tangle in the Big Game, which will have league implications and CIF Southern Section playoff seeding.

The Indians host Glendale tonight and are 5-3 in all games and 3-2 in league. With a win over the Nitros, the city rivals would have identical records.

Burbank’s romp was accomplished without the services of senior running back James Williams, who tore his right ACL in the second game of the season [15-14 nonleague victory against host Bell Gardens].

“I really wanted to play in this game,” said Williams, who was dressed in full uniform and even participated in pre-game drills. “I want to play, but I think it’s best that I just watch from the sideline and pull for my teammates.”

Despite the unfortunate injury, Washington State is keeping its football scholarship offer on the table, and Williams, who was named first team All-CIF as a sophomore and junior, is truly grateful. It’s also unlikely Williams will participate in the Burroughs game.

“Our focus tonight was to execute what we do,” Burbank coach Richard Broussard said. “We wanted to hit on all cylinders. We’ve been in playoff mode since we lost to Muir [31-0 on the road]. We want to make the playoffs, and we want to make a big run in the playoffs.”

Broussard also addressed the upcoming clash with the Indians.

“The game itself is big and it’s the city rivalry,” he said. “We want these guys to embrace the moment. Embrace the stage. Go out and have fun.”

One who did Thursday was senior quarterback Ryan Meredith, who threw for 131 yards after hitting nine of 17 pass attempts with two scoring throws.

The first was a six-yarder to senior wide receiver Dorian Householder (40 yards on four receptions) that catapulted the Bulldogs in front 14-0 with 49 seconds left in the first quarter.

The scoring spree began when senior running back Tony Toledo (79 yards on nine carries) darted in from 29 yards with 2:14 remaining in the opening quarter, and Toledo later added a 21-yard burst with just over eight minutes left in the second quarter that made it 21-0.

With 3:35 remaining before the break, the Bulldogs pulled ahead 28-0 when sophomore running back Nick Warren (84 yards on six rushes) found the end zone from four yards, as the rout was in full swing.

For good measure, it became 35-0 with three minutes left when senior fullback Kyle Alvarez made like a bowling ball as he lowered his head and bulled his way in from 24 yards. Alvarez bounced off several would-be tacklers who were left stunned.

That run had the Burbank sideline abuzz and was set up when junior linebacker David Medrano intercepted Arcadia junior quarterback Nico Hillier (18 of 33 for 236 yards and one interception).

An impressive 39-yard gallop by junior running back Brandon Alba (game-best 122 yards on 14 rushes) pushed Burbank (488 total net yards) ahead 49-0 with 5:08 left in the third quarter, and the Bulldogs’ final score was Alba’s three-yard dash with 8:23 showing in the fourth quarter that made it 56-7.

The Apaches (2-7 and 1-5 in league) scored when Hillier located junior running back Quentin Cortes (86 receiving yards on six catches and 12 rushing yards on seven carries) with a nine-yard pass early in the final stanza, and the pair teamed up on a 21-yard toss and 2:44 left in the fourth quarter.

“They just played better than we did,” Arcadia coach Andrew Policky said. “We’ve had a bad string of luck [injuries] and we’re a little young. I thought we had a chance to compete in league based on a productive off-season.”

Arcadia had its work cut out from the first possession and finished with 282 total yards including 46 yards on the ground.