Author Jeffrey Kluger discusses his new book Apollo 8:  The Thrilling Story of the First Mission to the Moon with space historian Amy Teitel at the Buena Vista Branch of the Burbank Public Library on Wednesday, May 24, at 7:00 p.m.

“As the years have gone by, and as the history of man in space has been recalled, Apollo 8 is coming to be recognized as a defining moment for man in space,” commented Librarian Hubert Kozak, who put together the program for the Burbank Public Library.

The astronauts on the mission, Frank Borman, Jim Lovell and William Anders, put the Apollo 8 Command Service Module into orbit around the moon and studied and took photographs of the surface for potential landing sites for a future mission.

A photo taken by Anders from the other side of the moon, Earthrise,” became one of the iconic photos of the 20th century. 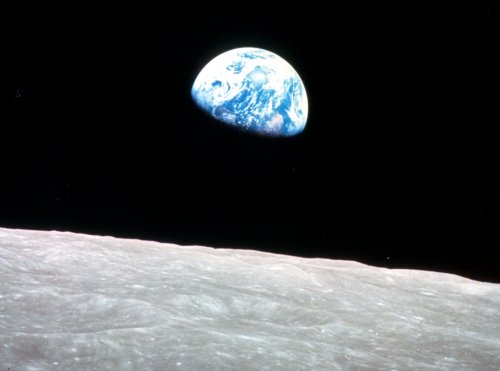 “Apollo 8 was an improvised mission, one that was moved up in NASA’s schedule of Apollo flights in its quest to land a man on the moon,” added Kozak. “Kluger explains how this was prompted by the space race with the Russians, a part of the U.S. Russian rivalry in the Cold War.”

“The mission was riskier and more daring than we knew at the time. When the Apollo 8 mission to the moon was planned, no crew had flown in the Apollo space capsule. The year before, three astronauts, Gus Grissom, Ed White and Roger Chaffee, had been killed in a fire in the Apollo capsule during ground tests.”

“The Saturn V rocket that would lift the astronauts into space had never put men into space before, and its last unmanned test had been unsatisfactory and engineering adjustments had to be made.”

Kluger interviewed Borman, Lovell and Anders, along with their families, for the book and tells a story that is dramatic, occasionally dark and often humorous.

“This is an inspirational story,” Kozak also said. “The Apollo 8 mission came at another time of deep division in our country, at the close of 1968, a very troubled year in our history with the war in Vietnam, deep racial divisions and widespread political unrest and the assassinations of Martin Luther King and Robert Kennedy.”

“And yet on Christmas eve in late December, the nation was focused on a national triumph, and the largest worldwide audience in television history tuned in to watch men talk to them from the moon and recite the moving opening passages from the Book of Genesis.”

The Apollo 8 program is the first in the Summer Reading Club series for adults, but everyone is welcome to attend the free event. Books will be available for purchase and Kluger will sign books for interested patrons.

A senior writer at Time magazine, Kluger also co-wrote Lost Moon with astronaut Lovell, which Ron Howard made into the film Apollo 13, about man’s first landing on the moon. 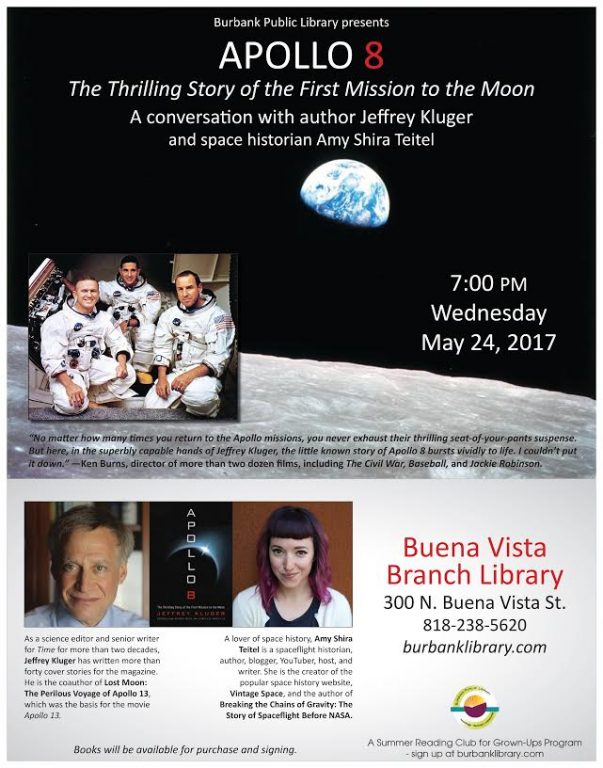