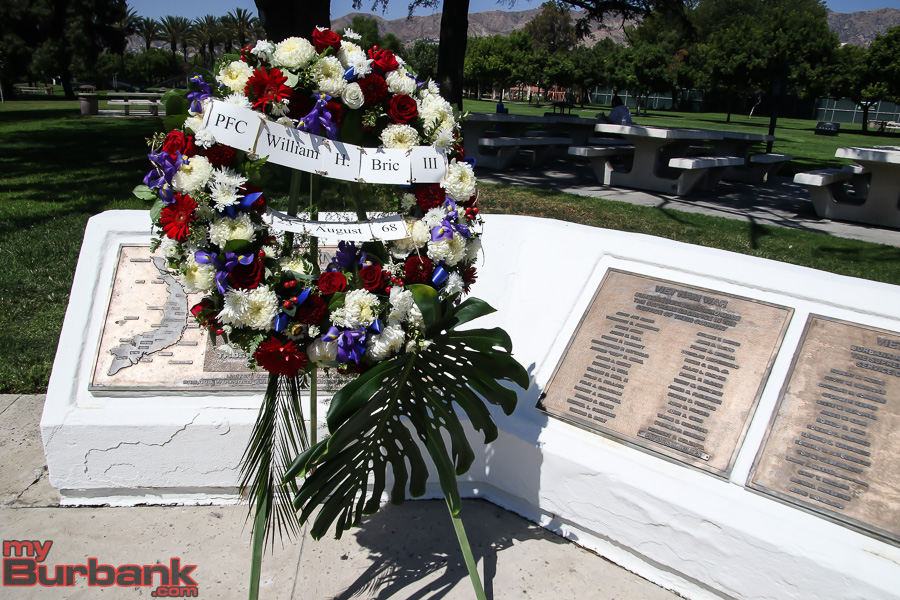 Burbank resident William H.Bric III made the ultimate sacrifice 50 years yesterday during the Vietnam conflict.  He was being honored in D.C at the Vietnam War Memorial and the family placed a Wreath at Burbank’s War Memorial in his memory.

William Bric II graduated Burbank High School class of 1967 his brother Gary served as Mayor of Burbank and sat on the City Council several years ago.

Here is a transcript that was presented yesterday during ceremonies at the War Memorial Wall by Doug Godshall who was s Special Forces Trooper in the 5th Special Forces Group, Republic of Vietnam.

My name is Doug Godshall, a Special Forces trooper in the 5th  Special Forces Group, Republic of Vietnam, assigned to Studies and Observation Group (SOG)  On 23Aug68, I was at FOB 4, CCN, a top-secret base at Marble Mountain, just north of Danang on China Beach.  We are here today in our Nation’s Capital to remember the sixteen men who died that day, the worst day in Special Forces history. We lost more troops on that morning in Danang than any other day in our history.

On behalf of the Special Operations Association and all MACV-SOG veterans, Dan Thompson, will lead us in a Ceremony of Names and Ashes.

On October 17, 2018, the Special Operations Association will host a Memorial Breakfast for the families of these same sixteen SOG Troopers.

To put 23Aug68 in context, 1968 was the worst year for American soldiers in the Vietnam war.

In 1968-excluding Khe Sanh and 23Aug at Marble Mountain, CCN lost 18 Americans KIA and 18 Americans MIA and 199 wounded in Laos, making 1968 our worst year as well.   SOG casualties were the worst of any unit in the U.S. Army history since the Civil War.

Many if not most lost that day were MACV-SOG recon men, crossing the border into forbidden Laos, Cambodia, the DMZ and North Vietnam.  The teams were generally led by two or three Americans, with four to six indigenous troops. The Forward Operating Bases, or FOBs, were launch sites for the missions.  At any one time, there were not more than300 American Special Forces operators assigned to the FOBs.

Casualty reports on SOG actions, including the 23Aug68 attack were Top Secret due to the highly sensitive cross-border missions.  There was no acknowledgment by the Defense Department where SOG Troopers were killed or went missing.

After dinner, Bill posted his team on the perimeter.  They were assigned guard detail that night.

About 2:30 AM an explosion blew up the hootch next door and blew our door open. As I jumped up. I   saw a sapper clothed only in a loin wrap running past carrying two satchels charges. Bill grabbed his Car 15 and ammo and ran to his team on the perimeter. That was the last time I saw him.

Explosions ripped through the camp.  Automatic gunfire stitched the plywood walls.  A cloud of gunpowder smoke lay over the camp.

John and I had .45 pistols but we had stored them in Bill’s locker. We huddled next to a hootch in the row closest to the beach. A Lt. took charge and directed us.  We secured weapons, recovered wounded, and searched shattered hootches while we fought a determined enemy..A sapper held a charge to his chest and charged. A helicopter pilot shot him with his .38.  Our Lt. and a Sergeant cut down a sapper as he ran through a hole in the wire.

At dawn, the last two sappers were found in a 3 holer latrine.  As we opened fire, they blew themselves up.

Bill ran to the fire and was mortally wounded in the initial invasion, but not before he engaged the enemy with effective fire in support of his team all while being exposed to ruinous enemy fire.  Bill was awarded the Bronze Star with “v” for valor.

MACVSOG soldiers at Marble Mountain that day Dan were awarded a number of medals for bravery, including the DSC awarded to Pat Watkins, our speaker this year in October.  Our Special Forces brothers heroes died running to the fire. I am here today because they distinguished themselves under fire. I have never forgotten Bill nor the others.  Not for a second. And I never will.

In remembrance today, we celebrate the lives of those brave men who gave their last measure of devotion to their nation and their brothers.

“It is foolish and wrong to mourn the dead.  Rather, we should thank God that such men lived.”