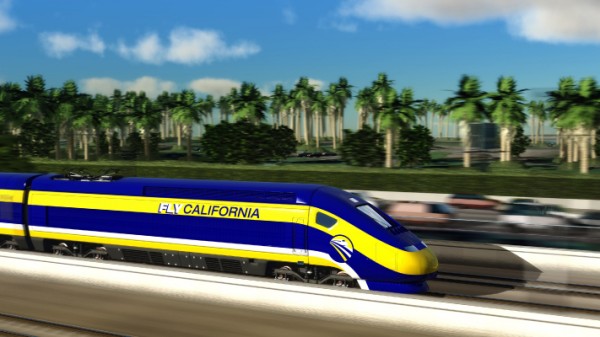 About 15 people listened to presentations by representatives from Metro (Los Angeles County Metropolitan Transportation Authority) and the Burbank-Glendale-Pasadena Airport Authority. Each will provide funding for the project to be constructed on the Antelope Valley Line, north of the airport at San Fernando Boulevard and Hollywood Way.

The Antelope Valley Line runs between Palmdale and Union Station in Downtown Los Angeles. The project is to provide riders with a direct link to the airport, so they don’t need to take a shuttle to the airport after arriving at the Downtown Burbank Metrolink Station.

The new station will have bays for bus drop-off and curb drop-off areas for passengers and disabled persons, officials said. Riders will step up to the train platform from a plaza area at street level. Access for disabled riders has been integrated into the platform with signage directing people there.

The main advantage to transferring passengers from street to the train platform is that passengers will not have to cross operating railroad tracks, making train access safer, officials said.

Commuters will have 55 to 60 parking spaces. Those who cycle to the train can secure their bikes in enclosed lockers or bike racks.

This new station’s parking lot will be added to the current airport shuttle rotation taking passengers to and from the terminal, officials said.

The project is in the design stage with construction to begin during the summer and completion planned for January, said Don Sepulveda, executive officer – regional rail.

Total cost of the project is $3.75 million. Metro will fund $2 million, Sepulveda said, which was derived from Measure R, a sales tax initiative approved by Los Angeles County voters in 2008 that established a one-half cent sales tax to be used for public transportation improvements.

The airport authority is contributing $1.75 million to the project, said Mark D. Hardyment, director of transportation programs with the airport authority. The funds are a portion of a grant the authority secured from the Federal Highway Administration for a ground access study.

Sepulveda pointed out that the new station will bring Burbank closer to the planned “train-to-plane” concept.

“Bob Hope Airport has the luxury of being nestled between two rail lines which is very unique in of itself,” he said. “The existing Metrolink and Amtrak station at Bob Hope Airport for the longest time was the only commuter rail connection to an airport in the country. It gives you an idea of the advanced thinking that’s gone into the connection for this regional train-to-plane type of connection that we’re trying to maintain and emphasize.”

Resident Janet Diel was most concerned with disabled rider access. She is vice chairman of the Burbank Transportation Commission and Barriers chairman and vice president of the Advisory Council on Disabilities.

“I’m concerned with parking and stopping zones for disabled so that families dropping off a passenger –grandma came to visit and they are taking her back and need a place to pull up to unload grandma, take her up to the platform, get her on the train and return to the car and go without having to park in a structure or parking lot because that is just really inconvenient,” she said.

She recommended increasing the green curb drop-off time limit from 10 to 20 minutes to enable drivers to help disabled riders onto the train before returning to their cars. In addition, she believes the “kiss-and-ride” drop-off/pick-up time needs to be ample for non-disabled passengers.

There also needs to be a safe place for cyclists to park their bicycles so they are safe from theft and inclement weather, because serious cyclists invest a lot of money in them, she said.

“We are trying to encourage people to use bicycles and if they do, those bicycles are expensive and sitting in a rack exposed to the weather and to the world, they can be vandalized. At least the lockers will ensure they will still be there when the riders return,” she said.

Other issues that need to be addressed are ticket vending machines low enough for those in wheelchairs and safety features like lighting and a security guard, she added.

Regarding lighting, the concept drawing showed light poles as well as filtered lighting from the canopies that also provide some shade from the sun, officials said.

Someone in the audience suggested that the canopies be fitted with solar lighting.

The new station will be an option for Burbank resident Vanessa Rachal if she misses the last train on the Ventura County Line that runs south of the airport, she said.

“I get on and off at the Bob Hope Airport Station and then I walk home,” she said. “If one day I miss my train, there is another train that leaves Union Station behind ours, that travels up to the Antelope Valley, so if something happens — I’m in a late meeting — I can catch that one and then I can get off [at the new station], and take a bus and walk home.”

Other issues Rachal wants addressed are who will maintain it and will there be security for those who travel at night. She also asked officials if they have a contractor yet, and they don’t, but are 90% completed with the studies. Maintenance is yet to be determined, officials said.

“And they are using Measure R funds — which is good — and it’s another option to get out of your car and take the train to and from work.”

Metro officials announced that an additional meeting on the new train station at 6:30 p.m. Tuesday, May 13, in Sun Valley has been cancelled and no other meeting has been scheduled. However, Sepulveda invited people to call or email him with questions and suggestions for the new station. His phone number is (213) 922-7491 or email sepulvedad@metro.net.