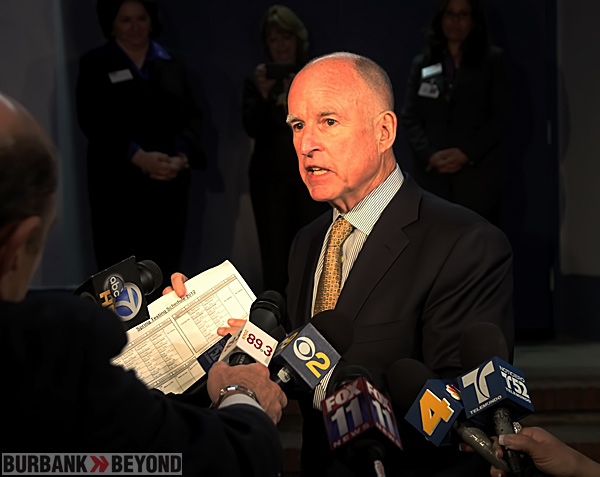 Governor Jerry Brown answers a question from Dave Bryan of KCAL & KCBS for the live shot at 5:00PM. (Photo by Ross A. Benson)

The political gamesmanship is alive and well in California as Gov. Jerry Brown used a Burbank Elementary School the day of his State of the State address to drive home budget concerns.

California’s Governor traveled from Sacramento to the Southland  on Wednesday to promote his budget and taxes that will appear on the ballot. The stop at Bret Harte school was meant to help drive home that if voters did not approve tax measures on the ballot, that teachers and schools across the state would suffer.

He first met with Burbank School Board Members and a selected hand picked group of teachers from Burbank Teacher Association.

During his brief roundtable discussion he listened to teachers talk about classroom size and the lack of funding to supply rooms with the equipment that’s needed, they also talked about the requirements that are used in the Standardized Testing Schedules.

He then met with a dozen members of the media outside for a brief Press briefing on what was discussed inside the closed meeting, most of the news outlets went live at 5:00pm with the briefing. 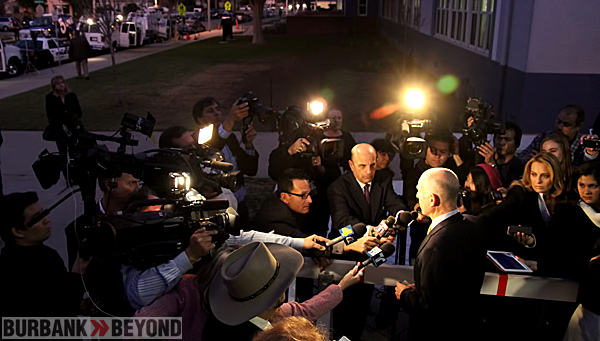 Governor Jerry Brown stopped at Bret Harte Elementary to talk with teachers, afterwards he met with the media. (Photo by Ross A. Benson)