At the rate of success some of the members of Burbank’s All-Star Senior Little League softball players have enjoyed in recent years, they might actually have enough frequent flier miles to go anywhere they want to go.

For the fourth consecutive year, the same core of girls will be competing out of state, as they travel to Montana to compete in the Western Regional Tournament. The team recently won the District 16 title, which was followed up with a Section 2 Southern California title.

The tournament begins Thursday in Missoula and Burbank will play its first game Friday morning at 9 a.m. against a representative team from the state of Washington.

“We’ve got out of state the last four years,” coach Rocco Buffolino said.
Five of the 12 members on the team have been on all four teams and four others are making their second out-of-state softball appearances.

“There’s almost 60 state championships with all these girls together,” Buffolino added. 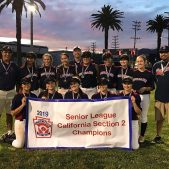 Pitcher Ann Buffolino, the coach’s daughter, is one of the five players who have been on four state title-winning teams. She will be a sophomore at Sherman Oaks Notre Dame this fall.

Kaelyn Freed, who will be a sophomore at Alemany High and Calista Lee, who will be a freshman at Oakwood School in North Hollywood, are the other two veterans of the team.

“I tell the kids if you play the game the way it is supposed to be played, you can play with anybody,” Rocco Buffolino said.  “If you throw strikes, you catch the ball, the put the ball in play you have a chance. If you don’t do those things then you’re not going to have a chance.”

He said the experience factor should help his team greatly.

“This should just be we’re out of state playing like it is another game. They’ve all matured in a year,” Buffolino said. “It is amazing the maturity level from last year to this year. It has changed for the better.”