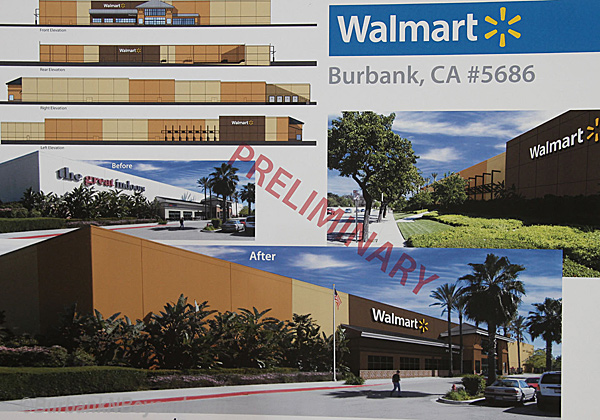 In a court decision announced this week, a judge has ruled that the proposed Walmart store in Burbank cannot go ahead until the City of Burbank meets certain legal requirements.

Los Angeles County Superior Court Judge Alan J. Goodman issued the tentative ruling that will stop Walmart from opening a store until the City of Burbank completes all legally required actions, and completes all traffic improvements originally required when the Empire Center project was approved 13 years ago.

The decision is a victory for United Food and Commercial Workers Local 770, the labor union that represents workers in Southern California super markets.  The union’s lawyer was legal counsel for the three Burbank women who brought the suit. Although traffic congestion was the issue that weighed heavily on the court’s decision, the real motivation for the suit appears to be the union trying to prevent competition with the grocery stores where workers must join the union in order to hold their jobs.

This is also the same union that spent thousands of dollars (more then any other candidate in the race) in the last Burbank election in an unsuccessful attempt to defeat Councilman Jess Talamantes.  Despite the unions efforts, Talamantes easily won re-election.  The union’s attempt at influencing the Burbank election was apparently motivated by Talamantes’ vote in favor of Walmart.  Apparently unable to influence Burbank voters, the union has turned to the courts in an attempt to delay the inevitable opening of the Walmart store here.

Walmart finds itself in the unusual position of being too successful in this case.  The plaintiff’s argued that the store would attract too many customers and thereby negatively affect traffic in the area.  The previous occupant of the site where Walmart will be located was Great Indoors.  Traffic was not an issue when that store was open, because basically nobody shopped there.

The City issued a building permit for Walmart to begin remodeling the existing building over two years ago.  In the 36-page opinion handed down by the court, the City is cited for not followings requirements to conduct another environmental impact report, and not completing traffic improvements that were part of the original development agreement for the Empire Center when it was constructed 13 years ago on a former Lockheed Aircraft Corporation site.

While the City contended that all legal requirements were met when the Empire Center was built, it’s argument that Walmart was simply occupying an existing retail space was rejected by the court.  The court’s opinion noted the huge disparity in the number of customers Great Indoors attracted to the potential number of customers a Wal-Mart would attract.

In a prepared statement, Walmart said, “We’re reviewing the tentative ruleing and evaluating all available legal options.  We believe the vacant, former Great Indoors store is suited for Walmart and the permits wre granted properly by the City of Burbank — like 1,300 similar permits granted for this shopping center over the last 13 years.  The Burbank Walmart will offer Empire Center customers a new option when it comes to affordable goods for their families and we decided to open a store here because we know local residents want good employment opportunities, including hundreds of jobs for the construction industry, a convenient place for one-stop shopping, and a new business to bolster the local economy.”

Although union attorney Gideon Kracov has portrayed the court decision as a victory for the residents of Burbank over a giant corporation like Walmart, the judge has put responsibility for this matter squarely in the lap of the City.   Neither the City of Burbank nor Walmart have stated whether they will appeal the judge’s tentative ruling.

No matter what the eventual outcome of the case may be, the real losers are the residents of Burbank who will have to wait even longer for the Walmart that was originally scheduled to open in January of 2013.