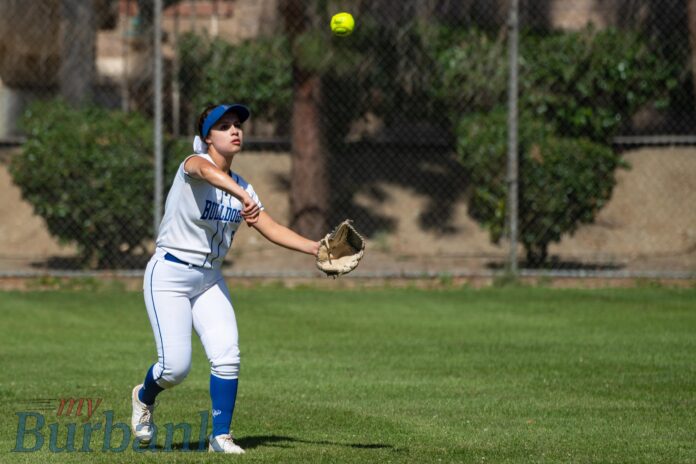 It has been difficult lately for the Burbank High softball team to click offensively.
The Bulldogs have faced uphill battles, resulting in frustration at the plate while looking to turn the corner in their quest to move up in the Pacific League.
Burbank mustered just six hits Thursday in an 8-1 defeat against visiting Arcadia at McCambridge Park.
The Bulldogs (11-12, 4-5 in league) have scored just three runs in their last three games, and remain entrenched in fourth place in the league.
“We have a pretty good team, but we’re in a slump right now with the bats,” said Burbank designated player Emma Mendoza, who finished with two hits. “I’ve been in a slump and we’ve faced some really good pitching the last few games. We have to hype each other to get more confidence.”

Arcadia (15-2, 8-1) entered Thursday’s contest coming off a 2-1 road defeat against Burroughs on Tuesday to put it in a tie for first place with Crescenta Valley.
The Apaches, who won the league championship last season, scored one run in the first inning, and five in the second.

Tiara Westbrook, who picked up the victory in the circle, had a run-scoring double in the first to make it 1-0.

Arcadia sent 10 batters to the plate in the second inning. Giselle Lai had a two-run double to field to extend the lead to 3-0. Four batters later, Virginia Garcia-Torres registered a two-run double to make it 6-0.
Burbank closed within 6-1 in its half of the second.
Aliza Bowen singled to score Sasha Quintanar, who tripled with one out.
“I just look to put the ball in play,” Bowen said. “We have to try to continue to push each other and the biggest thing will be communication.”
Arcadia, which posted a 6-2 win over Burbank on March 30, got a run-scoring single by Lawryn Chen and a sacrifice fly from Lai to cap the scoring.

Burbank will look to re-group against Burroughs at Olive Park on Tuesday.

“We know what we need to do,” Burbank coach Melissa Sanchez said. “We hit the ball a little better, but we need to get better on defense and we have some time now to fix things.”