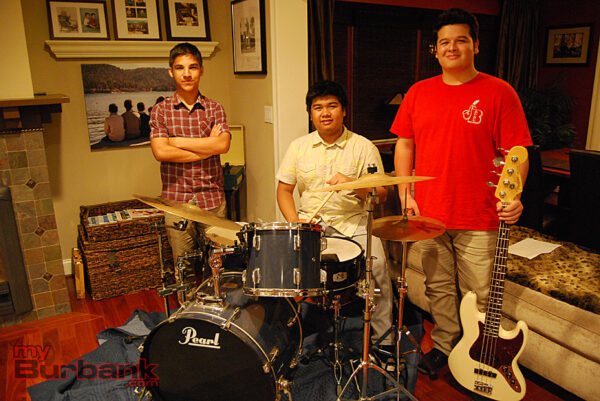 “Grammy Camp was special from the other camps because it was the closest thing I ever felt to being a professional musician,” Abcede commented. “We got to work with other people, not just musicians, and we all collaborated to make something special.”

Bassist Turner, a junior at Burroughs, met Abcede, then a ninth-grader, when Turner was an eighth-grader in middle school jazz band. They joined forces with keyboardist and pianist Mehta, a junior at Burbank High School, after connecting with him at a Burbank-Burroughs combined jazz performance earlier this year. 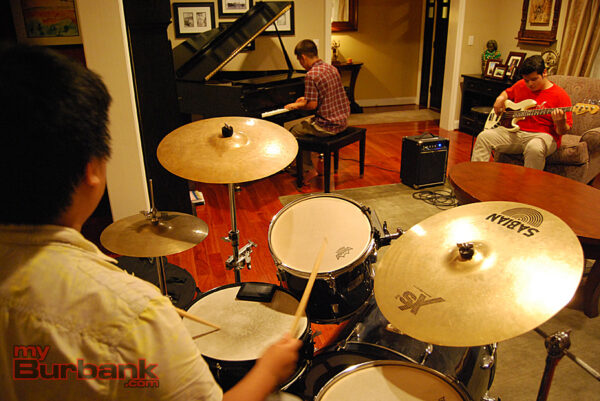 “Grammy Camp was an incredible experience yet again, it is incredible to be with other musicians and songwriters of a high caliber,” said Mehta, who attended the Los Angeles program for the second year in a row. “To play with world-class musicians and to be able to gain attention from people like the president of Capitol Records, the founder or Earth Wind and Fire, Justin Timberlake’s producer and major artists from around the planet every day is a priceless opportunity.”

In its tenth year, Grammy Camp holds one-week intensive workshops and sessions with music industry veterans and seasoned professional musicians in Minneapolis, Nashville, New York City and Los Angeles. The culmination of each week is the Launch Party, at which program participants jam onstage. 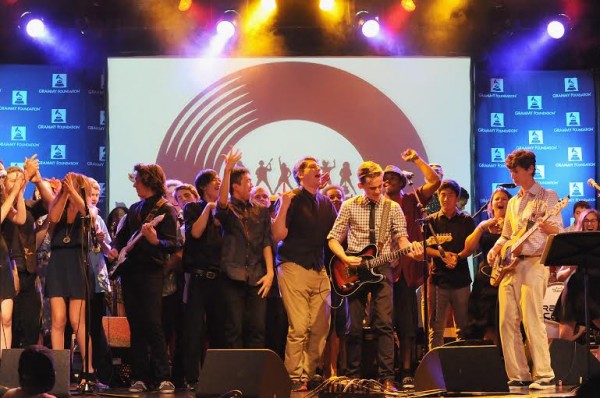 Students at Grammy Camp celebrate the program’s culmination with a ‘Launch Party.’ ( Photo courtesy of The Recording Academy®/WireImage, photo by Mark Sullivan © 2014)

Held at the El Rey Theatre, this year’s Launch Party for the L.A. program brought together the session’s 75 students who performed original material. Hosted by actress and singer Nikki Reed, the event was attended by Atom Factory’s Troy Carter, singer/songwriter Caitlyn Crosby and Roar Management’s Will Ward.

“I feel that my preparation and ability to seize opportunity allowed me to be selected out of thousands of applicants,” Mehta continued. “My advice to other young musicians would be to employ the same preparation and be ready to grind in order to become a full-fledged professional. It is NOT good enough to be just a great pianist, singer or dancer. You need to be able to do it all.”

Turner plays electric and upright bass and basically is self-taught. After joining middle school band in sixth grade, he continues to explore his love of music, playing in the Burroughs high school band and jamming with other local musicians like Abcede and Mehta.

“I am really influenced by Early funk like, Parliament Funkadelic, Brothers Johnson, Kool and the Gang, KC and the Sunshine Band and Chic,” he said. “I am also influenced by Ray Brown, Paul Chambers, and Jaco Pastorius.” 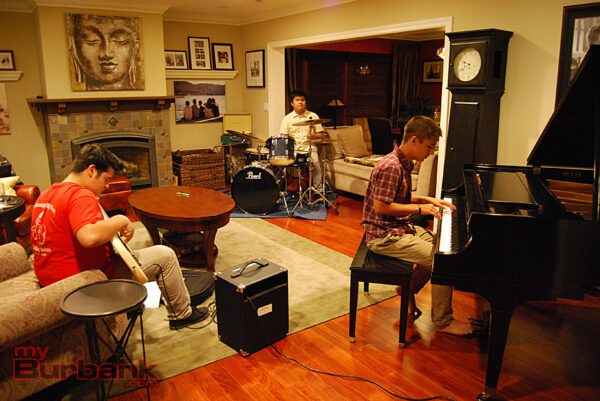 Mehta took formal piano lessons until age 12. Since that time, he says he’s been self-taught from books and recordings. He also plays in the Burbank High School band program.

“I ran a jazz trio my sophomore year that played at reputable clubs in LA, most notably Vitellos, Vibratos and LA Live,” Mehta continued. “Now, I am in the process of creating a fusion band with some college musicians, writing for film, producing and writing R&B/Hip Hop tracks, learning how to mix and master tracks and forming business connections with older industry professionals.”

“We play mostly Latin and straight-ahead jazz standards that I have rearranged or re-harmonized,” Mehta said about the as-yet-unnamed Burbank high school trio. “We also play fusion, neo-soul and funk. None of my groups work with a teacher, they are self-led; however we have been approached by very reputable mentors such as Gordon Goodwin, Russell Ferrante, Ron Jones, Pat Senatore and others.”

At a recent rehearsal in Burbank, the trio sounded well put-together, running through recognizable jazz standards. The group intends to play at local school functions and around the L.A. area in the coming year.

Students at Grammy Camp celebrate the program’s culmination with a ‘Launch Party.’ (Photo courtesy of The Recording Academy®/WireImage, photo by Mark Sullivan © 2014)