Burbank Unified Superintendent Matt Hill and Arts & CTE Coordinator Peggy Flynn were the featured speakers at the Fall 2019 Burbank Arts For All Foundation Community Exchange. They spoke about the need for additional funding to retain programs the district has supported in recent years, and highlighted the growth of music, digital media and drama/musical theater programs at three schools.

Hosted by L.A. Castle Studios, the event was attended by teachers, principals and school district officials, along with parents, members of the local community, business owners and board members of the Burbank Arts For All Foundation. 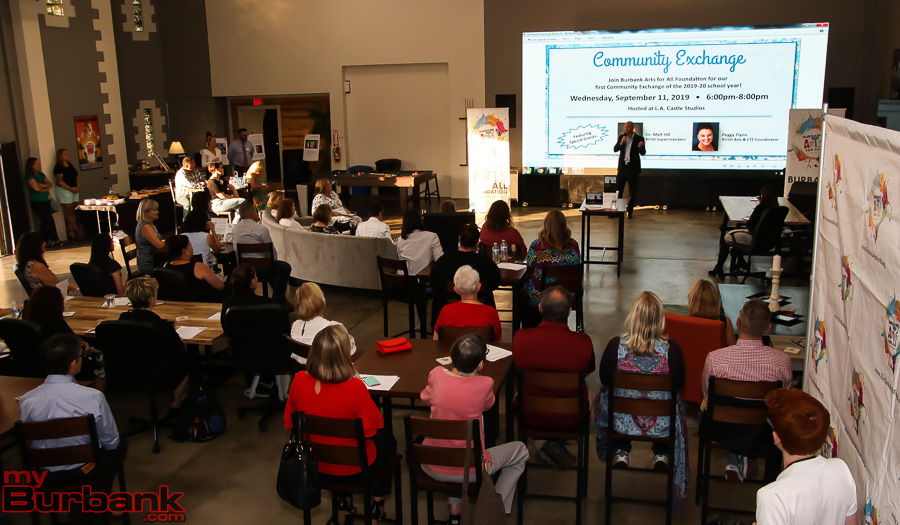 Burbank Arts For All Foundation held the Fall 2019 Community Exchange to highlight financial challenges faced by Burbank Unified School District and arts-related programs that have grown at the school in the past decade. (Photo By Ross Benson)

The focus of the Community Exchange was the need for increased funding for the Burbank Unified School District, which needs to cut $1 – 3 million dollars annually for the foreseeable future, due to rising pension, benefits and other costs.

Burbank Unified cut several administrative positions at the district office and at some of the schools, in an attempt to meet the 2019-20 budget $3 million dollar shortfall. The elementary school music program, which had been on the chopping block, was saved for the current school year by donations raised in large part by the Burbank Arts For All Foundation and local business partners.

Hill decried the lack of funding per pupil from the State of California, noting that California spends half the amount many states, such as New Jersey, spend per pupil. California will pay local school districts $11,993 per student for 2019-20, ranking 41st in spending per pupil out of 50 states. 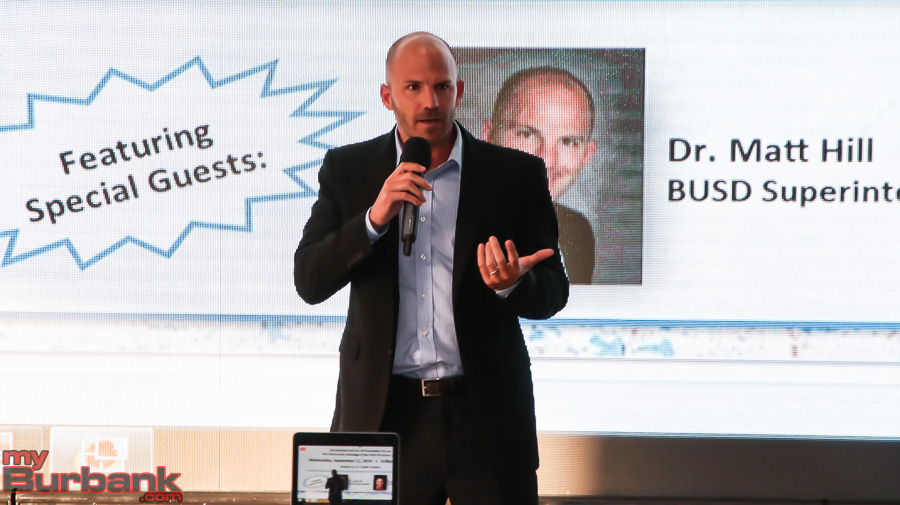 The solution to the budget shortfall as Hill and many BUSD officials see it, is a March 2020 parcel tax initiative that aims to raise approximately $9 million dollars annually if passed.

A parcel tax on the November 2018 ballot failed to pass by less than 1000 votes and Hill believes more voters in Burbank can be convinced to support the March 2020 measure which includes a 12-year sunset clause and options for those over 65 to opt out of paying the additional tax.

Hill said the average cost for homeowners in Burbank would amount to $14/per month, if the parcel tax passes in March.

Hill emphasized he is willing to talk to anyone about the reasons for the parcel tax and encouraged attendees and community members to ask questions and discuss the parcel tax initiative often in the coming weeks.

Flynn highlighted three programs that have been nurtured and developed over the past decade: the music program at Providencia Elementary, the digital media program at John Muir Middle School and the drama and musical theater program at John Burroughs High School. 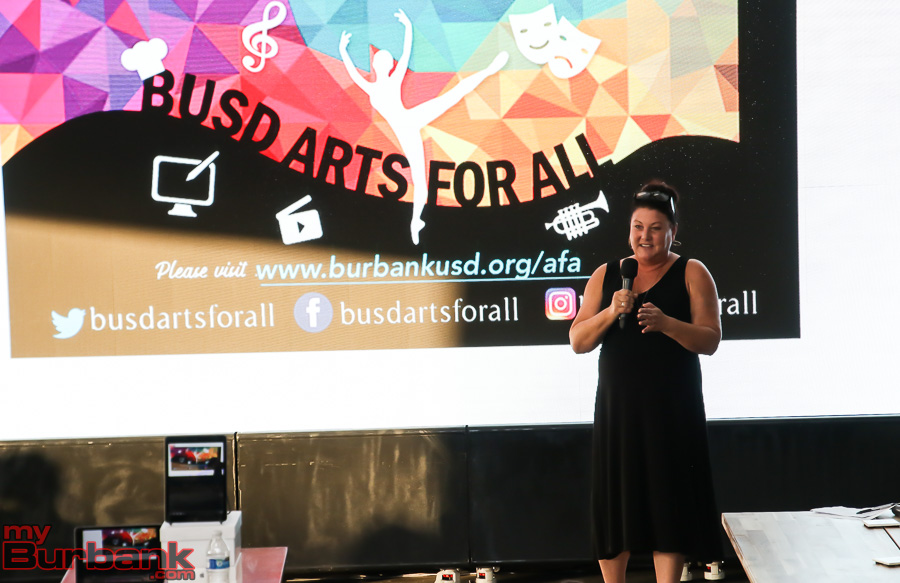 She also noted that in the past decade, the Burbank Board of Education’s support and funding of arts program increased from 1% of the budget to 5%.

Providencia Elementary was able to partner with Education Through Music – Los Angeles to bring an in-school and after school orchestra program to every fourth- and fifth-grader at the school, while expanding the weekly regular music classes to include more grades at the school. Typically, BUSD has supported a weekly music class for grades 2-5 at its elementary schools, and only a few schools have a string orchestra program.

“It’s a beacon of our school,” commented Providencia Principal Jen Culbertson, who highlighted that student excitement for participating in the string orchestra and learning to play a violin, viola or cello was extremely high. 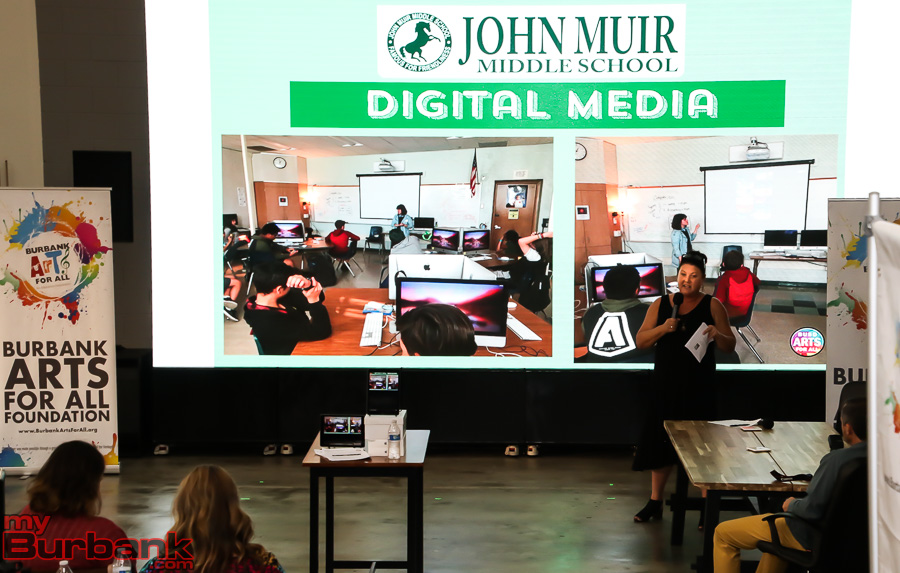 Muir Principal Greg Miller talked about the growth of the program and noted the three middle schools get together annually for a Tri-School Film Festival at which the students share their films.

Burroughs’ drama and musical theater program has grown as well, from a few class periods daily to support a full day of classes including Drama 1, Drama 2, Play Production and Musical Theater. Flynn noted that Warner Bros. was an early and strong supporter of the program as it grew and changed when teacher Guy Myers took over the drama program several years ago.

Myers, who is the 2019 Burbank Teacher of the Year, spoke about the positive impact participating in drama and musical theater has had on his students, reading some of their poignant comments aloud for the audience.

“I can’t think of a single reason to be open about who you are in high school. It must seem a bit of a played-out trope, hating high school. But it’s a trope I’m guilty of,” wrote one of Myers’ students. “I felt I had to put on an armor every day to get through the day. The armor held all the parts of me that made me individual.”

“I don’t know how Mr. Myers did it. He created a space freeing in a place that is anything but. He nurtured creativity, honesty, self-expression of his students in his classes. He created a space where young people felt safe to try out who they were for an hour of the day. My education comes from the experience of being open in the sight of others.” 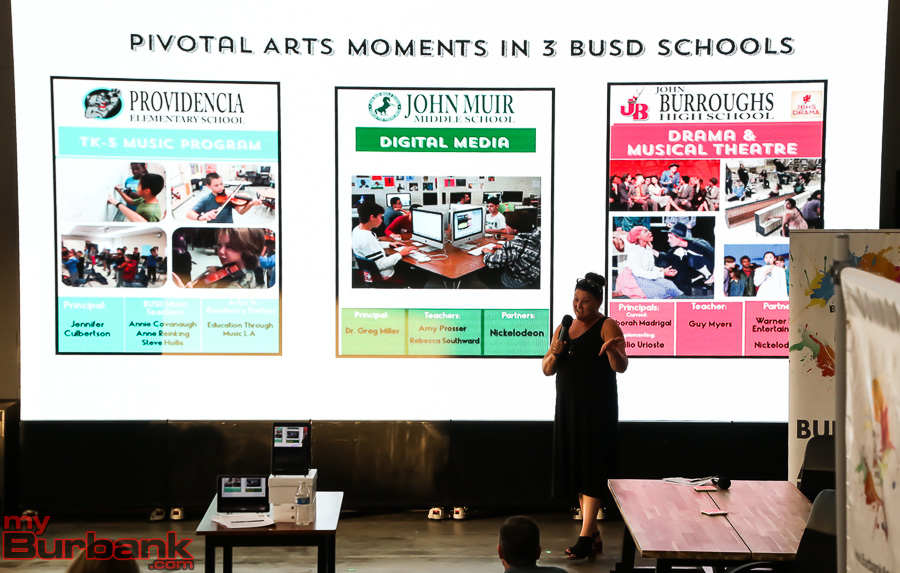 The program concluded with Foundation Community Outreach Chair Brenda Etterbeek and Arts Advocacy Leaders Jennie Ford and Erin Clendenin discussing effective ways for parents to get involved at their respective school sites, by engaging with the school’s PTA, Principal and School Site Council.

A video recording of the 2019 Community Exchange is available for viewing via the Burbank Arts For All Foundation’s Facebook page here.

More information on how California’s education system works and is funded can be found on the Ed 100 site. Hill encouraged all Burbank community members to visit the website to learn more.

Burbank Arts For All Foundation held the Fall 2019 Community Exchange to highlight financial challenges faced by Burbank Unified School District and arts-related programs that have grown at the school in the past decade. (Photo By Ross Benson)