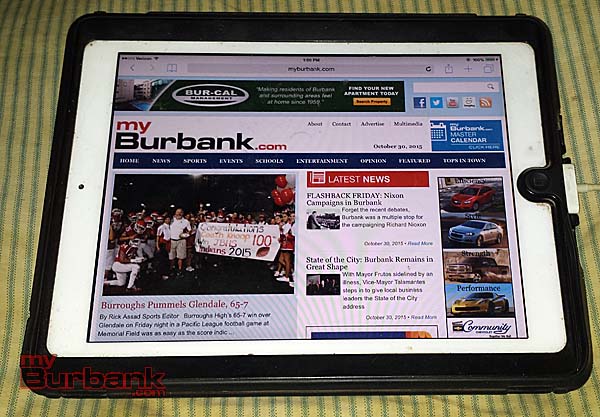 Parents may soon be examining a draft policy that would allow students to bring and use their own technology to a classroom setting.

Called BYOD, or bring your own device, the idea behind it is that since so many students have the technology and are bringing it to school, it could be possible for a smartphone, tablet or iPad to be used to help students learn.

A Burbank Unified School District technology task force meets monthly, and is comprised of administrators and teachers, and in the past, parents and students have also participated, said Bob Martin, coordinator of instructional technology.

The task force talks about “where we are with technology, and where we’d like to go,” he said, and BYOD would allow “students to bring in devices and work on them during school time.”

The conversation about BYOD started last year because “students already have the devices, and teachers were asking, ‘What is the policy?’” Martin said. “That was part of it. We also have teachers that want to bring more technology into the classroom.”

The school district has been purchasing more computer carts, and if there is a teacher that wants to use more technology, once the carts available, they can pull some of the computers into the classroom, or go into the computer lab at the school site, Martin said.

“Equity is one of the reasons we have been going slowly,” he said, “we understand not every student has an iPad or tablet at home.”

Martin added: “We are not there yet with computers so that we have enough for all the students who don’t have one. It will have to be monitored, to make sure it is not a learning problem. As far as smartphones, the number of students that have them is high. And that’s part of the professional development of teachers, that they use technology in a way that makes it fair for all these students.”

Indeed, the New Media Consortium or NMC, an international community of experts in educational technology, reported in a 2012 Horizon Report that 61% of Americans age 12 and up own a mobile device, and 44% own a smartphone.

Martin said they also want to make it clear that they are not trying to replace teachers.

“Technology is just a tool that students can use, just like a textbook,” he said. “It is the decision of classroom teacher whether or not technology can be used in the four walls of the classroom. We need teachers to be comfortable with it just as much as students in order for it to work, and work properly.”

It will not be mandated, and will ultimately be the decision of parents whether students bring their own devices to use in school or not, he said.

Other school districts have sought to provide each student with their own device, an effort that did not go smoothly for the Los Angeles Unified School District in 2013.

The Burbank school district will be taking a more cautious approach, and plans to roll the program out by grade levels, with teachers who are comfortable with the technology, Susan Cuseo, assistant superintendent said.

“We want there to be enough time for teachers to understand the technology and utilize it,” Cuseo said. “What’s working for us, is we have an iPad cart and Chromebook cart for those teachers interested in integrating that. It builds enthusiasm through word of mouth. Not that the whole plan would be rolled out that way, but to get it started and get interest [that’s how the program will begin].”

For example, the district might start with the fifth, eighth, 11th and 12th grades at the same time, Cuseo said, then additional grade levels would be added.

The fact that some students may have devices others do not have, or that some may not have any device to bring, is a challenge, she said.

“We do want some in the classroom for those that don’t have it,” Cuseo said. “The technology should be seen as a supplement. We can’t mandate [a BYOD policy] until we are able to provide it for all students.”

Teachers, Cueso said, will ultimately manage how the technology is used in the classroom.

After a draft of the policy is completed, which will become a part of the computer use policy if approved, it will be dispersed to principals who will then pass the information along to parent groups and others for their feedback, Cuseo said.

It could go before the school board by the second half of November, if not, it will be next year, she said.