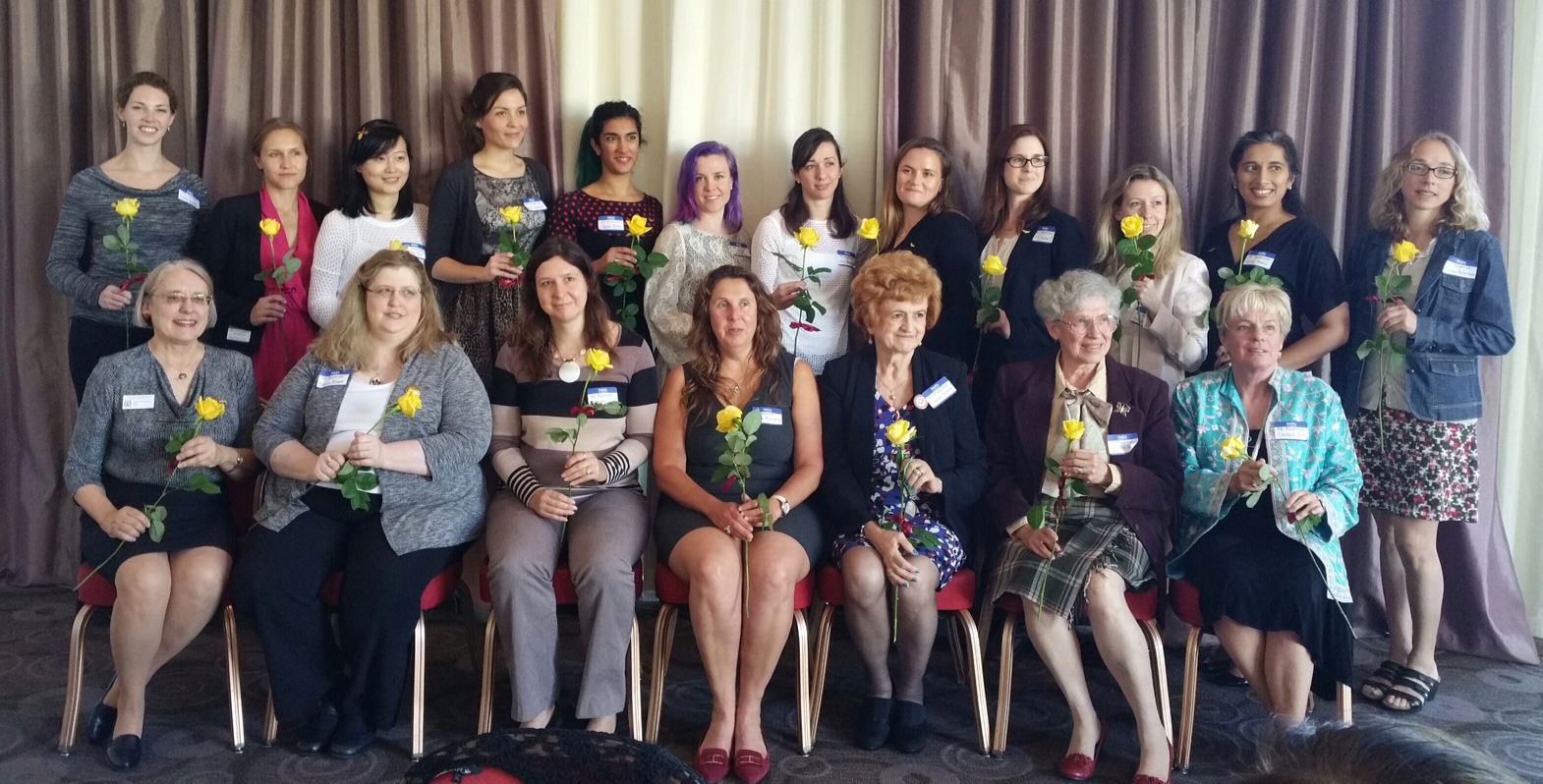 For a lot of folks back east, the sight of white has been calling forth a chorus of early morning groans. But for 2014 Amelia Earhart Fellow CECILY KEPPEL, the sight of swirling snowflakes in her native Wisconsin had inspired wonder. In the years that followed, young Cicely found she was good at math, very good in fact. She could predict when a water balloon would hit the ground, or maybe an annoying friend, and she “found calculus very exciting” and decided to use math “to solve real-world problems.”

Last Saturday, at the Amelia Earhart Luncheon and Amelia Earhart Fellows Alumnae Reunion, Cecily was sharing the results of her research into swirls of a grander sort: the behavior of ocean currents and weather systems, global dynamos that can mix together things both good and bad for our environment. And it was clear that there was big passion as well as big data behind Cecily’s animated graphs.

Welcome to lunch with the brainy bunch.

In the living memory of many of us, there was a time in America when women with a bent for math and science didn’t receive much encouragement. (In modern parlance, that would be a fondness for STEM: science, technology, engineering and math.)

They changed because earlier generations of women decided to follow their gifts wherever they led, even if it led them to traditionally male preserves. It wasn’t easy for them. Age-old prejudices about what women could and could not do are a hard, hard kind of ice to be breaking.

Some of these pioneering professionals banded together and formed Zonta International, “a global organization of executives and professionals working together to advance the status of women.” One early Zontian was aviation pioneer Amelia Earhart. She made a solo crossing of the Atlantic that impressed men and women alike. Burbank Zontian and luncheon host GRACE FARENBAUGH remembers her mother telling her, “You have no idea how popular Amelia Earhart was. She was more popular than the Beatles!” Grace’s mother had gone to college “to get her MRS degree” but, inspired by women like Amelia Earhart, Grace and other brave Baby Boom sisters went to college determined to become successful professionals in their own right.

Two-time Amelia Earhart Fellow URSZULA NIEDZIELSKA hails from the Polish town of Torun, the birthplace of Copernicus, who created shockwaves with his notion that the sun, and not the Earth, was the center of the solar system. (“Torun is also well known for its gingerbread cookies,” added Ursula.) She examines shockwaves of a different sort, the kind that jet turbines and Ariane rockets are able to create. Ursula bounces the waves off walls, and bounces off ideas with her colleagues, in the quest for breakthrough designs. She also got her pilot’s license, wanting more than just her mind to soar.

Cecily and Ursula were both honored as the 2014 Amelia Earhart Fellows, two of 35 women chosen throughout the world from an impressive application pool of 165 women. “The fellowship started out as a $500 loan back in the 30’s,” explains SHARON LANGENBECK, 2014-2016 Director, Zonta International & Zonta International Foundation. “Now it’s a $10,000 grant.” Only women in the aerospace field at the PhD level are eligible to apply for an Amelia Earhart Fellowship.

For purposes of the award, the aerospace field can encompass related research in other areas, including cosmology and chemistry. Featured speaker MORGAN NUNN MARTINEZ, 2011 and 2013 Amelia Earhart Fellow, regaled her audience with her meteor-chasing adventures in Antarctica, “Cosmochemistry—on Ice.” Antarctica turns out to be a great place to gather meteors. For one thing, the meteors belong to science rather than, as in many countries, some government bureau. For another, the partially melting ice in the six-month “summer” obligingly shepherds the meteors into a manageable area, penning them against mountains. Then the keening winds scrape the snow away, exposing many of the meteors to view.

So Antartica’s a great place to be discovering pieces of Mars and asteroids—except that you’re in a place that sometimes gets colder and windier than Mars. “The fellowship helped me get my gear,” points out Morgan, as we see a picture of the fur clad scientist with the right stuff surrounded by the white stuff.

It turns out that in probing the inside of a stone-sized meteor, you can peer inside a whole world. For example, it had been the iron cores of certain meteors that led to the discovery that the Earth itself had an iron core. And Morgan’s meteors can supplement the information about Mars gathered by Landers on the ground, and can also yield clues about the distribution of water throughout the solar system.

Since its inception in 1938, Zonta International has awarded 1,438 Amelia Earhart Fellowships, totaling more than US $8.6 million, to women from 70 countries. (Because some women have garnered multiple fellowships, there are a total of 1,014 distinct Amelia Earhart fellows.) Nearly 20 alumnae were on hand to welcome two of the newest members into their exclusive fold.