The Burbank Little League season began in grand fashion Saturday, March 3 with a opening day ceremony and festivities that rivaled that of the big leagues. 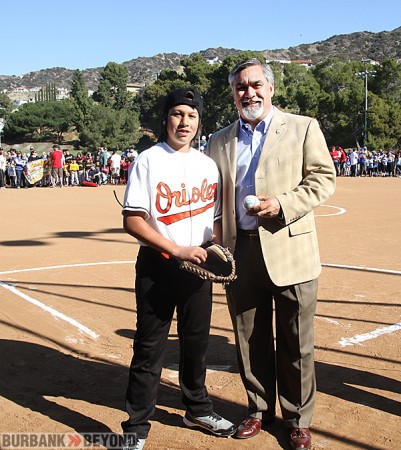 In its 12th season, the Burbank Little League offers 30 teams for 350 players in divisions ranging from the “coach pitch” league to the Majors. In addition, there are two softball divisions for females — the oldest of which made history last season by having a team advance to the World Series in Williamsport.

The league is a step-up in competition from the city’s long established “Hap Minor” baseball and something high school coaches in the city of Burbank had long called for.

“It is a lot more competitive — more games, more play” said the league president Thomas Magoon who has three boys in the Burbank Little League. “Hap Minor plays a ten or eleven game season and then has its All-Star game and that is it, where as the Little League has more than twice even before All-Stars begin .”

The season runs from March into June and is followed by All-Stars. Another huge advantage for more competitive play is that players get use to playing teams from other areas.

“Our district includes La Canada area, the Tujunga area and a lot of other areas in a 10-15 mile radius,” Magoon said. “The 9-10 year old team from last year was one win away from regionals which would expanded the map for those boys even more.”

Magoon stressed the league works well with the calendar for the Hap Minor season and the Parochial League’s season.

“It all works, we use the same fields here at Brace and we have a lot of the same kids so the city has worked out a calendar that work,” he said.

And while the league is competitive, it is also above all else a fun experience for all of the players as yesterday’s Opening Day reminded participants. Magoon says his three boys, Christopher (11) and twins Joshua and Nicholas (7) had really looked forward to the ceremony.

“They love it, it is a special day for them,” said Magoon who is in his sixth season with the league and in his second as the league’s president.

About the only thing lacking for the players is a true facility, one whose field’s dimensions are appropriate to the players age and size, something those involved with the league have long dreamed of.

Currently, games are played at Brace whose two fields are multi-use fields with all dirt infields. A fiber glass mound must be placed in the center of the diamond for older division games. All of the other nearby cities with Little League programs have facilities that more closely resemble the fields fans see when they watch the World Series on ESPN.

“That would be ideal,” Magoon said. “We always keep an eye out for the right space, but being a non-profit entity that would be a huge endeavor in a city with limited space.”

For now, the dreams of the 350 players involved in the Burbank Little League start-up again each March with the annual Opening Day. Good luck to all players, coaches and teams this season.

Burbank Has Board and Committee Vacancies to Fill