It was a long wait, but one that was certainly worth it for Burbank High’s Jayla Flowers Saturday at El Camino College in Torrance for the CIF Southern Section Track and Field Finals.
Flowers narrowly missed out automatically qualifying for the CIF Master’s Meet next weekend in the long jump in the afternoon. But she came back with a fine performance in the evening in the triple jump to earn an automatic spot in next week’s meet, which will also be held at El Camino.
Flowers came away pleased and noted that her season actually started late because she played basketball for the Bulldogs. 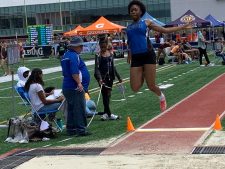 “For the long (jump) there was good competition. I know I can get farther. There is always next year because I’m only a sophomore,” she said. “Today the competition for the triple was absolutely fantastic. I got to see some old friends.”
Flowers finished third in the Division 1 girls’ triple jump by going 38 feet, 5 inches. Her personal best is 38-8, which is also the Burbank school record. Her mark was the sixth best of the day.
In the long jump, she finished fourth with a best of 17-10 1/2. It was the 13th best mark, which means she will be the first alternate for the Master’s Meet should another competitor choose to drop the event.
Burroughs High sophomore Eli Gault-Crabb was scheduled to compete in the Division 1 boys pole vault. But after not feeling ready to compete following his warmup, Gault-Crabb decided not to compete.
“In the prelims on one of my last jumps when I was running I felt a little thing in my leg and it shut me down for the week,” Gault-Crabb said. “So I rehabbed all week and I wasn’t expecting to do anything today. On my first jump, I just felt it a lot, my hamstring. I don’t want to hurt myself and I have two more years.”
Gault-Crabb decided to stop during his warmup.
“I would rather let an alternate go and have a chance,” Gault-Crabb said.