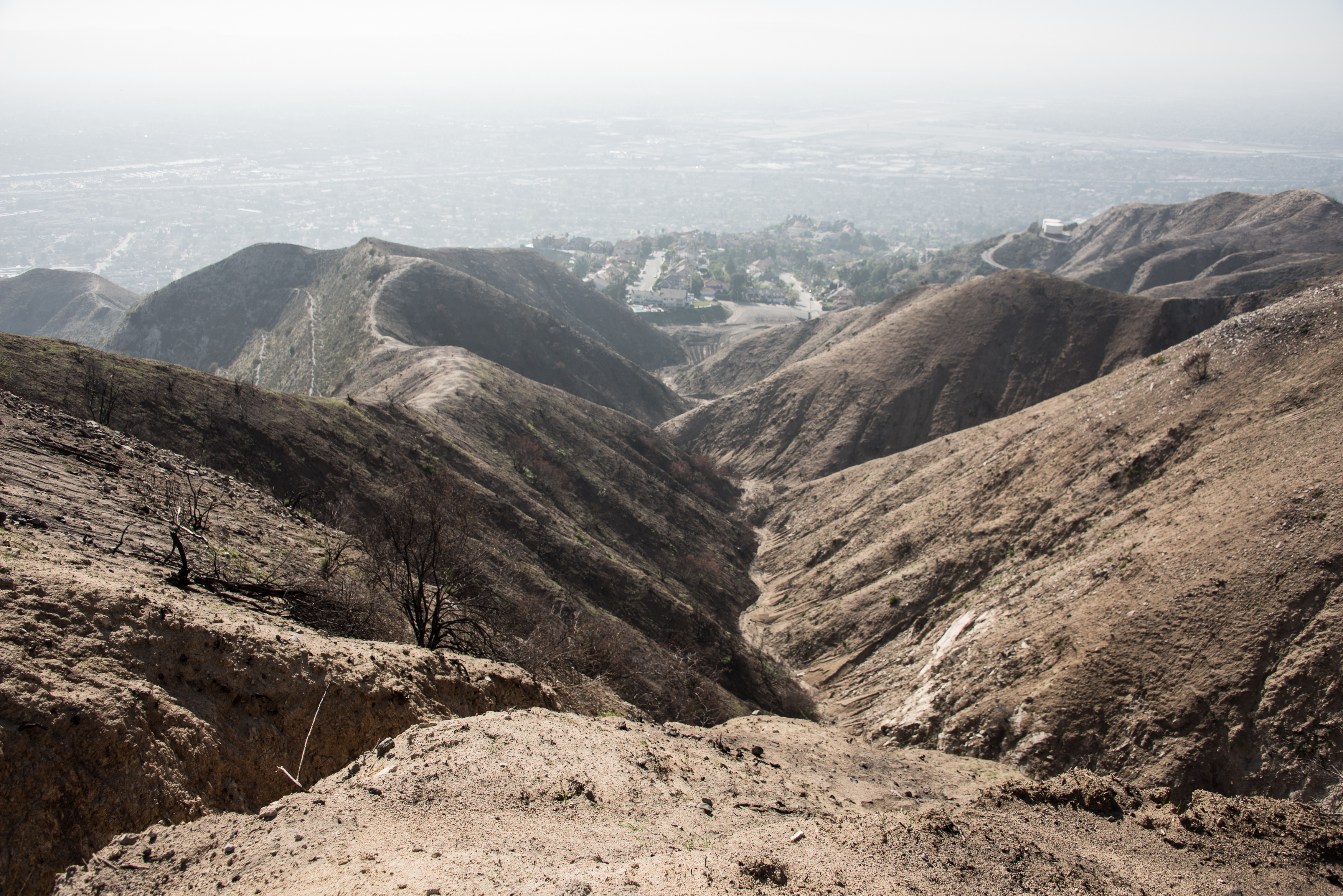 Burbank’s Mountain Trails Begin the Road to Recovery 2017 was a busy year for brush fires in the hills above Burbank.  It is impossible to climb in the hills above WildWood Canyon, Stough Canyon, or walk the trails without being overwhelmed at the power of nature, and feeling sadness at the destruction, loss of habitat, and loss of our wildlife in the wake of the intense fire.

The good news, hills on the Burbank side of the Verdugo Mountain trail system are open.  According to Brian Pucio at the Stough Canyon Nature Center, all the main roads are in pretty good shape, although some have ruts from erosion following recent heavy rains.  “There is quite a bit of loose rock in the hills, but nothing really falling down into the fire roads or trails” assured Pucio.

This could change if we get additional heavy rainfall over the next few months, so it is always a good idea to check before heading into the hills if in question.

One area that Pucio noted following the fires is the lack of wildlife and birds in the area, including within locations that did not burn.  The wildlife which could escape relocated, while those animals that normally would have survived a fire by hiding in burrows, such as rabbits, may have died in the fires due the high temperatures.  Pucio further said there were few remains of animals found following the fires, also indicated animals which remained or did not escape may have been completely burned to ash given the extreme heat of the fires.

While climbing the cliff faces near Overlook Trail, this reporter did notice a large number of ravens on the east facing cliffs.  Photographs show several of the ravens had burned feathers, likely the result of adults holding out near nests until the fire was too intense to protect the nest area.  Local bird experts indicate those ravens should shed the burned feathers during their next molt, and fully recover from the ordeal.

Evidence of heavy debris and mudflows are very apparent throughout the hills above Burbank.  Pucio explained how the debris basins below the Stough Canyon Nature Center and DeBell Golf Course nearly overflowed.  The City of Burbank and LA County have been working diligently to remove debris, and the area should be well-prepared in the event another mudslide or debris flow threat occurs.  However, according to the LA County Department of Public Works clean up in all debris basins impacted by the La Tuna Canyon Fire Burn Area mud runoffs are not anticipated to be completed until mid-March 2018.

Climbing through the canyons it is also interesting to note the mudflows are very hard – much like experienced during lahar flows following volcanic eruptions. Given the heat intensity, Pucio explained that much of the ground soil went through some composition changes which may have included properties such as soil structure and texture, as well as water holding capabilities.

My Burbank would suggest care be taken when leaving the main trails, as much of the debris embedded in mud flow such as tree branches and rocks may appear to be firm, however when used as leverage in climbing may actually be loose and result in a slip, fall, or injury (this is reported following personal experience!).

Walking the trails you can see evidence of initial recovery.  Green weeds and sprouts are popping out of the sand, and during a climb on Feb 6th we did note several Junkos (birds) in the non-burned areas just below the Nature Center parking lot.

For residents and visitors to the hills above Burbank – the recreation areas are open for business.  Just keep an extra eye open for potential hazards, and be sure you check the weather to ensure you are not caught in an unexpected rain storm or mud flow.