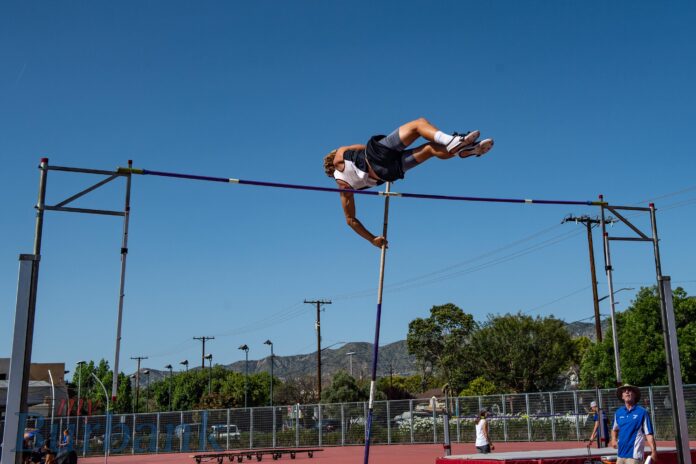 Saturday at Trabuco Hills High in Orange County, Saptya qualified in both the 200 and 400 meters for the finals at next weekend at Moorpark High.

He finished second in heat one in 49.33 in the 400, the sixth fastest qualifying time.

He had the eighth fastest time in the 200. He finished in 22.22 and ran in the same heat as UCLA football signee-Braden Pegan of San Juan Hills.  Pegan also finished in 22.22, but was according to the official time 2/1000th of a second faster than Saptya.

Others who competed in CIF but did not qualify for the finals included Burroughs Dilan Webster, who went 21-1 ½ in the long jump, which was the 13th best mark. The top nine in each event qualify for the CIF finals.

Burbank High’s Joshua Michael Jiminez went 134-6 in the discus, which was 17th best.

Kai Sebastian of Burbank cleared 5-foot-8 in high jump, which is the opening height, but he was unable to go any higher.

Burbank freshman Ogden Lucsik made the opening height of 11-9 in the boys’ pole vault, but was unable to go higher.

Burbank’s Emma Cusumano went 14-11 in the long jump, which placed her 34th.

Otelia Lighthill of Burroughs took 29th in the discus going 102-6.

Katherine Bui of Burbank went 99-11 in the discus to take 34th place.

Jacob Fabian of Burbank went 41-6 ½ in the shot put, which was good enough for 30th.