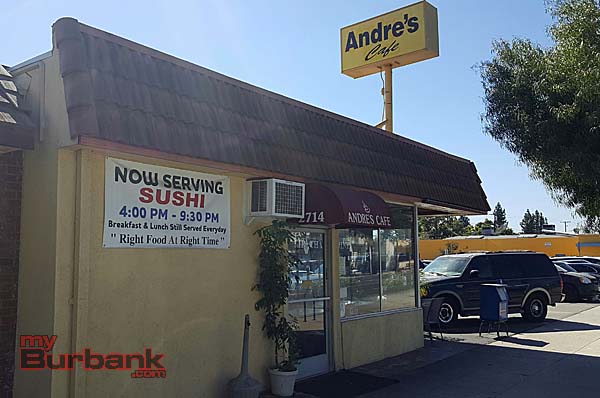 As we travel around town there are always those places you look at but don’t always stop by to try although they look inviting.

One of the things that we also try to accomplish to find those unique, single owner restaurants that take care and pride in their food, offering something that you would come back for time and again.

We had seen Andre’s Cafe in the past but they close everyday at 2:30 before opening again at 4:30 as a Sushi restaurant. I know, I don’t get it either.

Because it closes at 2:30, I have a rule called the One Hour Rule. In that rule, you never go to eat at a restaurant in the last hour that they are open. I have found over the years that servers are rushing to do their end work for the night and they forget about customers because they have to leave by closing.  I am also sure the cooks are doing the same thing and not as worried about the time and loving care that a meal needs. So I found over the years to stay away from restaurants in that last hour.

So around 1 pm we got into Andre’s an was a little worried not to see other customers during lunchtime. Maybe it was just a slow day.

I ordered the California Burger which avocado, pickles, fresh onion slice, tomato and lettuce with thousand island. I of course asked for cheddar cheese instead of American.

When the burger came I noticed two things immediately. Number one was the thousand island looked like it was more of a sauce than a dressing. I also saw that the avocado was freshly cut and plentiful. So a little bad and a little good from first observations.

The buns were slightly toasted and the patty, which was advertised on the menu as a quarter pound Angus beef patty, was sitting on the bottom bun. The patty actually looked small on the regular sized bun.

There was not a lot of juice in the patty and I was never asked how I wanted it cooked so it was basically cooked medium. The bottom bun began to get a little soft and soggy but seemed to hold up.

While I could taste all of the condiments in each bite, the taste of the patty was not different or stood out. I assumed the patty had been frozen at one time and just used when needed. This just turned out to be just a very ordinary burger and did not stand out in any way.

Side Notes: The well done fries were seasoned but they did not taste fresh at all. They had probably either been frozen and just thrown into the fryer or had been pre-made and just warmed up.  They were hard to finish and I was not able to.  Had some of their cole slaw and it was alright. Drinks are served by the can so if you would like a refill, be prepared to pay for another can. Lastly, you had better bring cash because Andre’s Cafe does not accept credit cards. I wonder how the sushi is after 4:30?

Andre’s Cafe receives: Could Use a Rewrite