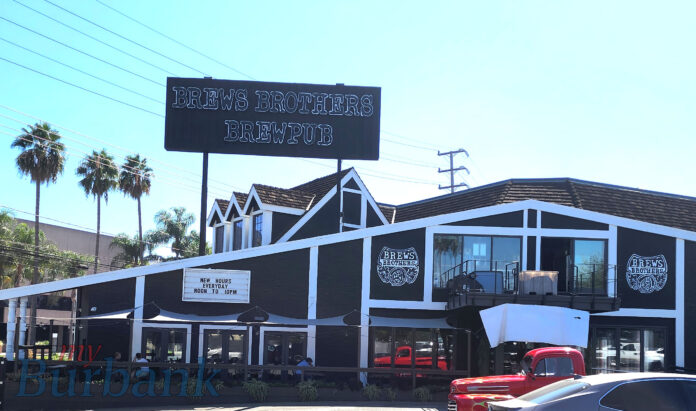 Chadney’s has come a long way. Back in the day, this was an entirely different scene in this area. You had The Tonight Show Starring Johnny Carson at NBC in the studio right next to Alameda, and just across the street was the infamous Chadney’s, where many of Hollywood’s elite would grab a steak.

Chadney’s, like NBC, is now a memory and the restaurant sat vacant for a while until Simmzy’s came along with a nice remodel and a pretty good burger, receiving the coveted ‘Top in Town’ designation. Alas, they did not survive the pandemic, and once again, the site went looking for love.

Enter Brews Brothers. Unlike Simmzy’s, they did not have to do much remodeling; just basically had to rebrand the space. But they still would have to prove themselves regarding the burger.

We went in the afternoon before all the Happy Hour specials kicked in and were seated in a nice area. Everything is pretty much the same inside, and it is warm and inviting. Our waitress came over immediately and was very pleasant and knew her menu well.

I went with the “Classic Burger,” which went for $15.50. There were other burgers on the menu for a couple of dollars more, but in all honesty, they were all a little too spicy or ‘Gucci’ for my taste. The Classic Burger was described as “Smoked Cheddar, Red Onion, Sweet Baby Gem Lettuce, Tomatoes, & Cleyonaise (House Remoulade Sauce).” I always feel much better about ordering a burger when a server asks how I would like it cooked. Medium rare is the only way to go if you want to experience all the juice of a good patty.

When we were served, the burger looked great, and even though I prefer lettuce with a little crunch to it, I was okay with the lettuce leaf since it was not overdone. I really hate when you order a burger, and you get a burger salad instead, with lettuce piled a mile high.

While the burger seemed a good size, the brioche bun seemed to be larger than usual. The bun was soft, and it had a nice toast to it, which is always a good sign. You never want a bun explosion halfway through a good burger when the juices attack a defenseless bun.

Overall the taste was great, the meat was cooked perfectly medium rare, and it was nice and juicy. As I made my way through the burger, there was no problem with the bun, which actually held up great all the way through. In fact, it absorbed many of the juices from the burger and kept them in the bun to even increase the flavor right until the end. Very few juices leaked out onto the plate, and it turned out to be quite tidy.

Overall, I was quite happy with the burger, the taste, and the presentation. It is just too bad that in these times of out-of-control inflation, a good burger costs about $15 whenever you go nowadays. This is definitely a place to stop at and try.

Side Notes: Brews Brothers has many local beers, with many being brewed by them. If you are a beer fan, you should give them a try.

My friend tried the Tuna Melt and thought it was very good also. The only real issue he had was that it came with a side salad, and they don’t warn you it was made of arugula. He had to drench it with dressing to eat it. I. myself, would always rather have a nice iceberg salad with crisp, fresh lettuce instead of lettuce that you need a use a machete to cut the foliage. (Rant), I know iceberg lettuce is not as healthy as arugula. But you know what, it is NOT unhealthy, and I just happen to like it better – so there, back off!

The fries were nicely well done and were just missing something on the taste, maybe seasoning? They were good and cooked perfectly, but they only brought you a small time of ketchup. It would be nice if they offered some different sauces (like blue cheese).

For dessert, they offer you a total of one item, the House Made Brownie. I know, here comes another Pizookie. But no, instead of a clumpy brownie, it was crumbled up with ice cream and some butterscotch sauce. It was actually very good and I really enjoyed the fact it was basically the same dessert as everyone else serves but presented in a totally different way that really made it more enjoyable.

I did have to chuckle at the silver tin bowls they brought the dessert and the sides in. I recently got a puppy and those were the same exact size and looked like the bowls I bought to put his food in.