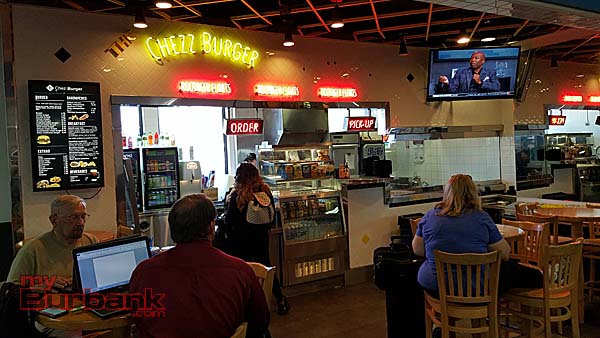 The other day I happened to Google ‘Cheeseburgers in Burbank’ and I got this listing for Chezz Burger at the Bob Hope Airport. While we just there a few weeks ago, I did not see anything like Chezz Burger, so I was perplexed, which I know some of you think I live my life like that.

After a little research, we found that Chezz Burger was past the Security Point in Terminal A in the part of the airport that Southwest has their flights, right between gates 5 and 6.

Of course, being the Burger Dude, a little thing like a security checkpoint was not going to stop me.  Checking our Rolodex, we found the right person to call and within minutes we were standing in front of Chezz Burger.

Walking up to the counter, we found am employee who was extremely friendly and courteous. Ordered the Chezz Burger, fries and Onion Rings and sat down at one of the tables.

Our order taker brought our food to us and the first thing I did when removing the burger from the package was do a double check – the burger was in a sandwich roll compared to a round hamburger bun – I was once again perplexed.

Upon looking over the burger, the patty was also shaped like a sandwich rolled and filled the bun well. All of the condiments were there along with thousand island dressing on the bun. There was also tomato, pickles, onions and lettuce and the bun was fresh. These was also a good amount of American cheese on it that had a great taste.  What I was even more impressed with is that the patty was not laying on the bottom bun but was near the top and the condiments were below so the bottom bun kept its integrity the entire time.

Of course, I was disappointed that it was not a fresh, hand packed patty but in all honesty this was a great tasting burger. The bun and burger design was a great take on the traditional cheeseburger and was worth the wait and the walking to get to it.

Chezz Burger would have received a Tops in Town if not for the patty, but everything else worked.

So it looks like you will now have to book a flight somewhere soon so you can get into Terminal A and grab a really good tasting burger. I thank my connection for getting us in to try Chezz Burger!

Side Notes: My friend had the Garden Burger and loved it, said it was just right. We also ordered some Onion Rings and Fries and the cook listened to my well done request and popped out some of the best fries I have had in a while. The prices were not that bad either and both employees were great and a tribute to the business. They also have a large breakfast menu if you have an early flight.

Chezz Burger receives: On the Marqee