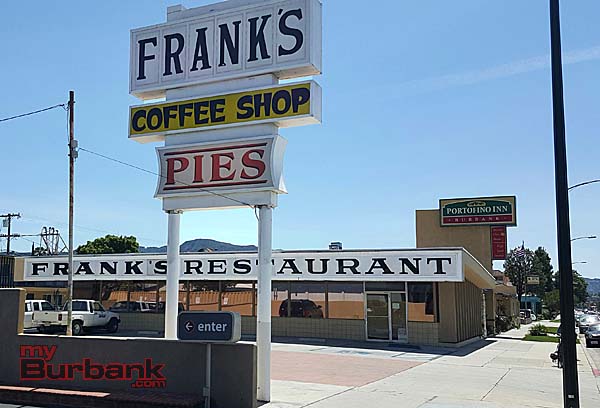 We were out and around this week when my friend pointed at this one restaurant and said, “What ever happened to that place, it always seems closed”. It was true, at 5:00 in the afternoon, Frank’s Restaurant on Olive was closed.

Years ago, it was a vibrant restaurant, although not memorable, but good comfort food. In fact, many of Burbank Police’s finest would be seen there nightly grabbing their ‘Code 7’.

We found that it is now just a breakfast and lunch restaurant so we ventured in one afternoon this week. Once inside, you could see the decor has not changed in a long, long time.  Sometimes, that’s a good thing.

We sat in a booth and immediately were greeted by our waitress. Ordered the cheeseburger and asked for cheddar cheese which they had.  Was asked how I would like the patty cooked (YEAH!) and of course the answer was medium rare. I was now curious about what might be in store.

Once the burger came it looked hot and fresh. A ketchup and mustard bottle were brought to the table but being in a restaurant, I knew they had to have some thousand island so I ordered a side for the bun.

The condiments (lettuce, tomato and pickles) were all fresh and looked good with the tomato looking as though it was freshly cut. When the thousand island came I could tell it was not store bought but made fresh. It was thick and spread well. The patty itself looked as though it was fresh and not frozen and the cheddar cheese was spread liberally over the patty.

The bun was also interesting. It was actually incredibly soft and fresh although I was worried that the patty was resting directly on the bottom bun which might spell an upcoming bun disaster. Thank goodness I was wrong as the bun actually held together well during the entire experience. The bun did have a nice toast to it which really complimented the entire burger. Did I mention how soft and fresh that bun was!  It was actually the star of the entire meal.

The burger overall was good. The only thing that did not make it great was it was cooked medium instead of medium rare so the juice was not really there. The patty was also not really large – it was good size – but not as large as some of the great burgers. It did not really taste a lot of flavor so it might have used a little more seasoning.

Overall I did enjoy the burger and it was a fair price. All of the ingredients appeared fresh and it looked as though the cook had pride in what he put out, not thinking it was just another burger order and who really cares. He cared and I was better for it.

If you are in the mood for a good, reasonably priced burger before 3:00 pm, I recommend you stop by Frank’s.  Not only will it take you back a few years, but there is some Hollywood history there as Hollywood has used the location many times, most recently in shows like the Scorpion pilot, Son’s of Anarchy and the feature Larry Crowe.

One funny story is you walk in and see a sign on the door that says “No Pies”. You kind of wonder why since their sign out front says ‘PIES’. Turns out that when one Hollywood show came to use the restaurant, they changed out the sign Frank’s had with one that said PIES and when they left, forgot to put the original sign back in.  Whoops.

Side Notes: Tried the cole slaw and it was made fresh and had something a little different – raisins! They did add to the flavor. The fries turned out to be my nemesis, they were steak fries.  While I just don’t like that large of a fry, the cook actually did a good job of making them well done so they were not too bad.  Could have used a little more seasoning, but I used the extra thousand island as a dip for them. Not bad. I will probably return someday to try some other menu items since all he food seems to be locally produced and made fresh.

Frank’s receives: On the Marqee