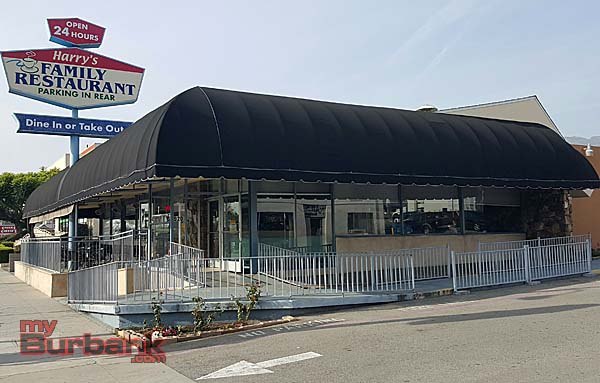 If you have lived in Burbank for a while, than you know of Harry’s. It has been by the corner of San Fernando and Burbank for as long as people can remember. Open 24 hours, you have probably stopped by there sometime in the middle of the night, possible after too many adult beverages.

Having ate there before, some of the dishes like Country Fried Steak are very good.

When we stopped in to eat around 1:30 pm, there were very few people there (maybe two tables) which always worries me a little at lunch time. A restaurant this large, with plenty of parking and being around this long should be much more busy.

When ordering the burger, I was never asked about how I would like it cooked so of course, I was worried about the patty. I would hope that a restaurant burger would be fresh. I asked for cheddar cheese and also avocado to help the taste hopefully.

When the burger came, it was served on a plate and it appeared that the cheese was was not a slice, but shredded. There was also a healthy amount of it which had been melted onto the patty. The problem is that the patty, while somewhat large, did not look handpacked.

The bun did not appear to be toasted or toasted for more than 20 seconds and in all honesty did not taste that fresh to me. With the avocado came some lettuce, tomato and everyone’s favorite condiment, thinly sliced carrot? There was ketchup and mustard available at the table but I requested the burger saver, thousand island to smear the bun with.

As I ate the burger, I did not taste any juiciness at all and in fact, the whole thing just tasted a little dry. The only two good parts seemed to be the avocado and the cheddar cheese. The patty did not seem as though it had been seasoned at all.

By the time I was finished, I really did not find the burger to be anything more than something you might find in just about any diner that has aged. Oh wait, I forgot, I was at Harry’s. I guess it all makes more sense that way.

Side Notes: Also ordered the cole slaw and it was made on site. Not a lot of flavor but you could tell it was fresh. The french fries turned out to be my nemesis, the steak fries. I just don’t like steak fries myself and even asking for these well done, just did not do the job.  They probably needed 3 more minutes in the fryer and any kind of seasoning salt to at least try and make them special.

Harry’s receives: Could Use a Rewrite