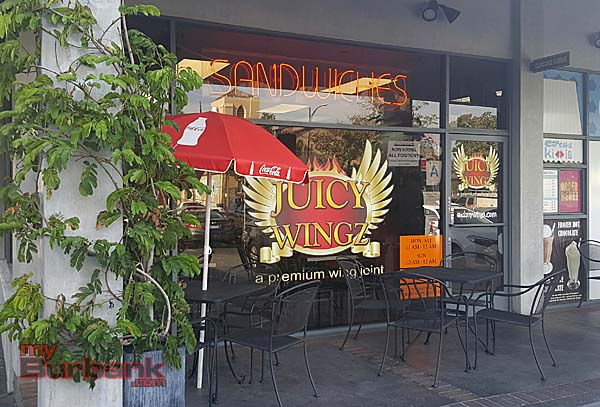 I have heard complaints in the past that we go to a place that does not feature burgers, such as Mexican restaurants, and complain that the burger is not up to standards because why would they make a good burger when they are a Mexican restaurant?

That answer is simple, because they serve it on their menu and they should take pride on everything on their menu.

So when we stopped in at Juicy Wingz this week, we were not really sure what to expect by ordering a burger at a wing place. But that is why we are out and on the prowl every week.

Juicy Wingz is in the same strip mall as Dӧner Burger Grill at Alameda and Glenoaks. There is ample parking and a nice, clean atmosphere inside.

I walked up to the counter and ordered the Cali Burger, which consisted of cheese, avocado and bacon on a brioche bun. A question you never here at a fast food styled restaurant is “how would you like it cooked?”. I immediately perked up when answering medium rare that this might just be more than your typical burger at a wing place.  I also asked for cheddar cheese but was told that they did not have cheddar. My happiness was now a little more slightly subdued.

We sat down and when the food was brought to us, I had some serious hopes. The burger looked like some thought had been put into it.  A little closer look gave some warning signs, but I was still hopeful.

To start with, the patty was not real thick, it did seem as though it was a fresh, not frozen patty, but it was cooked more medium than medium rare.  It lacked some of the juice a great burger has. Sometimes I wonder if a cook presses down on the patty while cooking. When they do, the burger compresses and the juices wind up on the grill and not in the patty. The patty did also not seem to be very well seasoned.

The amount of avocado was not very liberal and it was not there every bite. While the bacon tasted fresh, the American cheese just did not do the job. Yes, it is personal preference, but I really enjoy the unique taste of a sharper cheddar cheese along with all of the other great tastes of a burger.

Lastly, the bun. It seems brioche buns seem to be the new ‘in’ thing with burger joints. I have no real problem with them, but they seem to be hit and miss.  This one just seemed to have too much bread and it was also a little dry (old?) for my taste.  I have had brioche buns that have actually added to the burger but this time it was just there.  With the patty having very little juice, the bottom bun did not have any problems even though the patty laid right on top.

This was actually a good attempt at a quality burger. There was some thought put into it but some of the execution lacked.  I would not mind trying another burger here if a couple of things changed and they might even squeak out a Tops in Town down the line.

Side Note:  I was very impressed with the quality of the overall food here. To start with, they have one those soft drink dispensers that lets you pick everything from a huge selection of drinks. I love to try things like the cherry vanilla Dr. Pepper or the cherry Mello Yello. The onion rings are big and delicious and remind me of the ones you get at Tin Horn Flats, which are probably the best in Burbank. The fries were hand cut and came out good well done. The order of cole slaw was actually HUGE and while I did not get it with one of their many flavors, it was fresh. Very impressed and highly recommend it all.

Juicy Wingz receives: On the Marqee