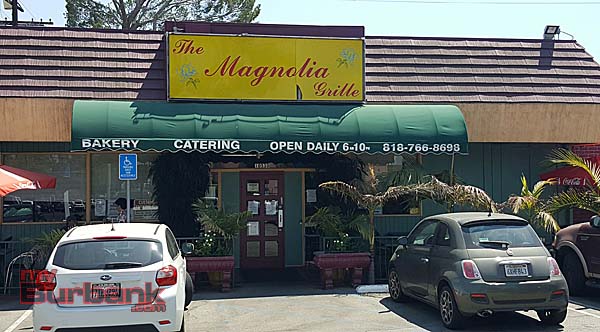 Yes, we stumbled across the border this week into North Hollywood, although it was not much of a stumble as we just went a few blocks west of the city limits.  We first tried two other locations (a new shop on Magnolia and another diner on Burbank) but they were already closed for lunch – yes, at 2 pm.

I have actually been going to the Magnolia Grille for a while, mostly for breakfast. Their food is fresh and the portions are fair.  The service is always awesome.

So when everyone else decided to close their doors early, I thought it was time to try my secret location for their burger.

Yes, I say secret because they are not well seen as you are driving down Magnolia leaving Burbank. They are in a strip mall that is recessed from the street so not easy to locate.  Once you find it, they have a nice large seating area and a nice outside dining area that is pet friendly. They even have some items on the menu for pets.

You can always tell when your really not at a burger restaurant when they only have a couple of offerings on their menu and so I ordered the only thing I could, the cheeseburger.  It describes itself as 1/3 ground sirloin. I had to ask for the cheese to be cheddar and also asked for medium rare. This is another sign of a place that does not put much into the burger when they do not ask about such crucial things.

Once the burger came it was pretty much how I expected.  It was served opened face on a plate with the patty resting on a toasted bun. The top bun was also toasted and had some romaine lettuce on it along with some tomatoes.

What was missing was pickles and onions. There was also no spread served with it but mustard and ketchup containers were on the table. The cheddar was well coated on the patty.

Upon my first bite I did taste the flavor of the patty and the cheese, but it was really missing the other condiments. The patty was fresh and was cooked as ordered but did not seem to be as juicy. Sometimes cooks flatten patties on the grill and the juice comes out and is lost forever. While I don’t know if that happened here, I am just throwing out a reasonable guess of what it tasted like.

The bun held up well despite the patty sitting directly on it.  This was also probably because there was not much juice in the burger.

Overall, the burger was okay, but not great and worth a top rating.  Everything was fresh and well made, just not special. Now the omelettes…..now that’s a different story and worth another review down the line…

Side Notes: The shoestring fries came exactly as I ordered them and they were great. Just the right amount of crispy. They also offer a dipping sauce for the fries of your choice. Also tried the soup (excellent) and the cole slaw. The slaw was extremely fresh and creamy, exactly the way I like it. It was also a very large portion which was great.  My friend also ordered a side salad that was good portioned also. The food is all good here and the prices are reasonable,

Magnolia Grille receives: On the Marqee