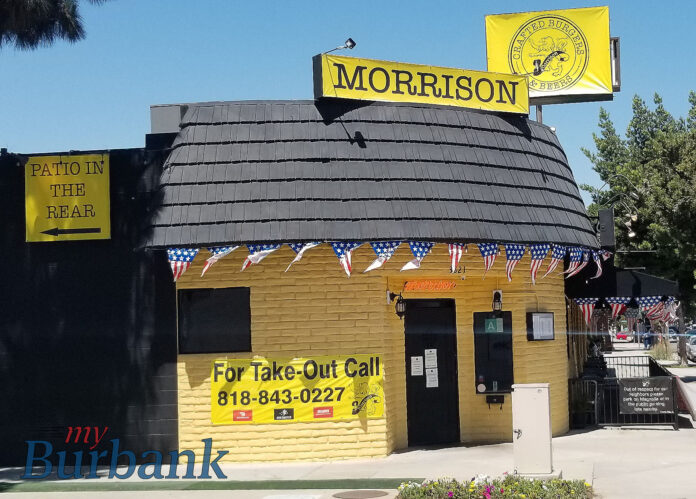 Okay, I know it has been a while, yeah, a long while. But let’s face it, Corona Virus sucked.

Now that the world is beginning to spin once again on its axis, life is getting back to where it belongs.

And where is that? Exploring burgers!

So to get back on the scent again, I thought where is an upscale burger that I can sucker my editor into paying for and I have heard great things about? Enter Morrison.

So we actually sat on their patio in the back on a warm day but the way they have it designed it was much cooler and very comfortable.

Now it was time to select my burger. While they have over 10 burgers on their menu starting at around $17, there was only one that could order to celebrate my return as the one and only official Burger Dude, “The One” Burger.

This is described on the menu as “AMERICAN KOBE beef patty, shallots, aioli, truffle oil, truffle peelings, butter lettuce, port salut cheese, grilled mushrooms, along with a side of fries.

Now, I have to be honest. For those who know me, it is cheddar cheese all the way. I had never even heard of port salut cheese but it intrigued me. It was explained that it was a creamy cheese. So I went with it to get the full experience of “The One”. I did this for you, my loyal readers!

After about 15 minutes, it came. It was cooked medium rare as requested and it looked like a masterpiece of work. The cheese was white and took a finger swipe of it for a quick taste and guess what, it was not bad at all.

Just looking at this burger with its hand-formed patty made my mouth water. The bun at a sheen as though it had just been dipped in butter but it was dry to the touch. The mushrooms were plentiful. My only reservation was the butter lettuce which does not have the texture I like and it was sticking out everywhere. No worries though, I did a little trimming first.

So I will prepare you for one thing. Make sure you have a lot of napkins ready to go before you pick this beast up. One bite and the juices started flowing. We are not talking a couple of drops either. This burger IS juicy and it absolutely melts in your mouth. The American Kobe beef has an amazing taste along with everything else mixed in. Yes, port salut cheese really did work and added to the overall taste and enjoyment.

This is NOT one of those cheap burgers you see advertised by Carl’s Jr. with a person eating it with one hand. Who in the heck eats a burger with one hand anyway? This must be consumed with both paws on it. Once you start, there is no going back. Every bite works right until the end.

Now that I have you excited to have one of these masterpieces, I have to warn you. You will pay a price for excellence and in this case, “The One” will set you back $25. Yeah, pricey. But sometimes you need to treat yourself, especially now when you need to get away from the past two years.

Side Notes: As always, I asked for the fries well done and they came perfect. Nice and crispy with a side of ketchup.

If you have read my reviews before you know that while it is about the burger, which is the star, dessert must be tried.

Wow, and what a recommendation it was! This was the most amazing bread pudding I have EVER had – with no close second! It was cooked in its own pot with a slight crust on top. Of course, I ordered it a-la-mode because when you go in, you go all in.

It also comes with the butterscotch on the side and the trick is to eat some of the top crust layer and create a ‘crevice’. Once you do you slide the ice cream in and pore the butterscotch on it. This could be a meal within itself! Really a great way to cap an outstanding meal.