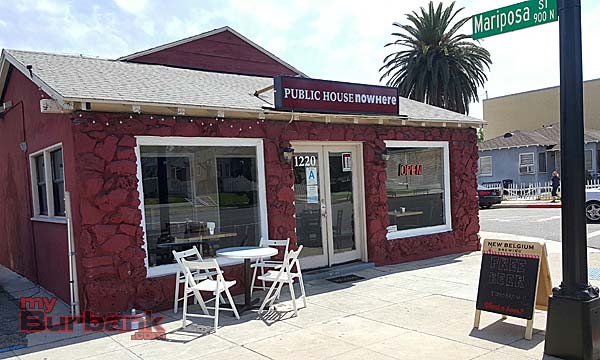 If someone wants you to join them for a burger and you ask them where, if they answer nowhere then that’s where you want to go, as in Public House Nowhere.

Formerly the 818 Pizza on Burbank and Mariposa (and formerly many things before that) Public House Nowhere has only been open about a month and to very little fanfare. We stopped by there one afternoon and it was not very busy but I have a feeling that will change with time.

The inside has really not been changed around much and still sports many TV’s around the inside including one that is dedicated to Dodger games for you people with DirecTV.

The menu is not complicated with just one burger on it. When I ordered I was happy to be asked for my choice of cheese and how I would like it cooked – two great signs. But even with that, it would still have to pass the taste test. 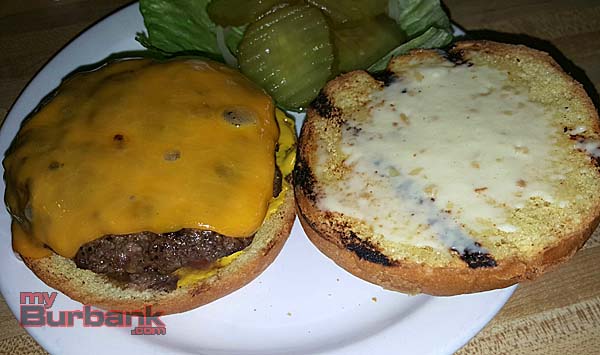 When the burger came it was served on a plate open faced on the plate with spreads on both of the top and bottom buns that were both toasted.  The patty was hand made and while not on the huge side, was non the less well proportioned.

On the side was the usual condiments such as lettuce, tomato, pickles and onions that were all fresh.

Once I loaded up the burger and took my first bite, I could tell we had a winner. The patty was seasoned and gave off a great taste that was complimented by the cheese and the condiments.  The patty, which was cooked medium rare, was juicy and gave off plenty of flavor.  I am so surprised that more places do not jazz up the flavor on their patties, it just makes for such a great burger when they do.

As I finished, my first thought is that the size of the patty was actually perfect. The entire time of the meal I was able to taste all aspects of the burger.  There was never a time that I was overwhelmed by just one of the ingredients. 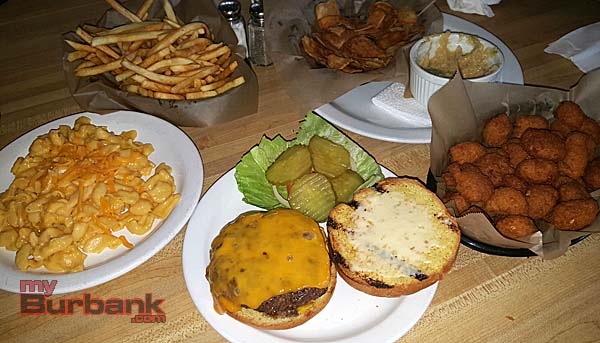 So here you are, people of Burbank, a new place to try that you probably did not know was there. I am definitely going back to try some of the other food on the menu.

So the next time that someone asks you where you are going to eat and you don’t want them to go with you, just tel them you are going ‘Nowhere’ and they won’t tag along and your conscience will be clear because you did not lie!

Side Notes: There are some great add-ons that I had to try.  They make their own fresh and hot chips (with a humus dip) which are an excellent appetizer. They also have a basket of fries which they did nail the well done on. Something that we fell in love with were the Corn Fritters which is something like deep fried cream corn which were amazing.  Also tried the Mac & Cheese and while it was good, nothing great.  I thought these sides might be small but every one was great portioned – your are not cheated!