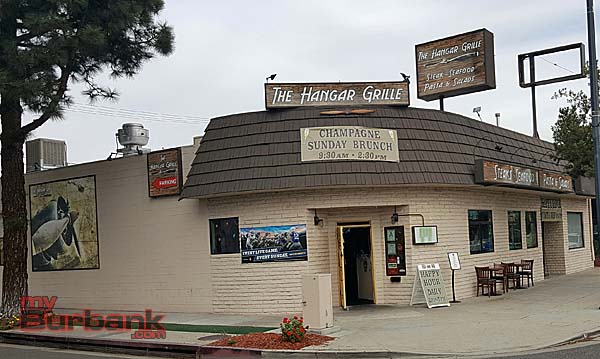 The Burger Dude reads his email (and Tweets!) and he is always ready when someone asks for a second chance.

The Hangar Grille on Magnolia sent in an email explaining the ownership group had changed and they wanted the Burger Dude back. The first review they were given an ‘On The Marquee’ rating but they felt they had made the changes to move up to ‘Tops in Town’.

I reread my original review before we went in to see where the major points of contention were and my number one complaint was the cheese. So in we went.

The interior is basically the change. We were met as soon as we walked in the door by a very friendly server who quickly got our drinks, gave us some menus with some lunch specials.  As I looked at the menu and all it said for burger was something to the effect of Made to Special Order. I thought that might be a little vague as to what my options were and I started to  wonder what I had gotten myself back into.

But than I spotted a small silver bucket with a paper in it along with some golf pencils that basically let you design the burger of your choice. It is something the Counter also does and leaves nothing to chance or a servers memory in some cases.

Now you are at ease to choose your protein,the temperature (which they did not list medium rare but I wrote that down and the server had no problem with it. You can choose your toppings, your cheese and they have some premium toppings along with some side orders if you want.

Already, I felt a tremendous improvement. The last time I was hear they did not have cheddar cheese but all they had was a Monterey Jack/Pepper Cheese mix that they used. It really sucked. Now you can still have your Pepper Jack cheese (and people will point and say things quietly behind your back) or you can check off the cheddar box.  I also went with the iceberg lettuce, thousand island, white onions, tomatoes, pickle spear and also checked off the avocado box.

When the burger came, it looked totally different then last time. The patty was hand made and thick and you could see everything piled up.

The cheddar cheese was melted over the patty and all of the ingredients looked fresh.

I actually had to push it down a bit and remove one of the slices of tomato just to get it in my mouth, okay my big mouth as some of you think, around it. The first bite released some of the juice in the patty that splashed down on the plate. Because the burger was built upside down, the toasted bottom bun had no threat of falling apart. Both buns did a good job of staying together and tasted fresh.

The overall taste was great. Everything that the last burger they put out last November was nothing like this new one.  I totally enjoyed it all the way through. The patty was seasoned and cooked perfect and the flavors all mixed well. My only suggestions would be to put the thousand island in a cup on the side like the ketchup they supply because I would have preferred more and I thought the avocado was a little skimpy, but the taste was absolutely there.

I am really glad that they emailed us to come back and took the time and energy to revamp their old burger. This time I will be back and probably many times, to have this burger and I look forward to trying some of the other things on their menu.

This kind of why we started our reviews – to find some great burgers out there in places that you may not know about of go to. There are actually a lot of great burger out there!

If someone we have reviewed has made improvements, let us know. We will be glad to come back and try it again.

Side Notes: I ordered a side of cole slaw and it was alright but I really don’t think it was made fresh that day. Nothing like freshly made, juicy cole slaw.  The fries were also an improvement and were cooked to my liking. They seemed as though they were cut and made fresh. For dessert they recommended their chocolate bundt cake and holly cow, that thing was a treat in itself. They make it there on premises and it was nice and warm with a great filling. This rivals all desserts in all restaurants. My only suggestion might have been…how about making it ala mode!