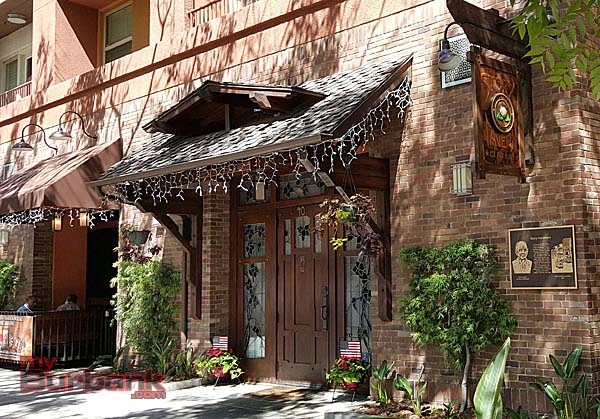 Story Tavern has grown over the years. What started out as a small bar and restaurant has now expanded into patio seating along with a game room that compliments their business and surroundings well.

When you walk in you can see a very well maintained restaurant that is decorated with the history of Burbank everywhere, thanks to a partnership with the Gordon Howard Museum. You could easily spend an hour there alone just looking at pictures and memorabilia.

The menu is not large but they do tout their burgers, saying that they are “100% Dry AGED locally butchered beef. All selections served on a Brioche roll with a kosher pickle spear”.

Sounds good to me.

I ordered the Story Burger which is “A blend of 100% Black Angus butcher chopped Short Rib & Chuck. Served with lettuce, onions & tomato, a kosher pickle spear and topped with your choice of cheddar or Swiss, pepper jack or bleu cheese. Served on a toasted Brioche roll”. The server asked how I would like it cooked and of course I replied medium rare and of course with cheddar cheese.

I was excited for the burger and when it came it really did look great with the cheese melted just right and the bun looked fresh. I thought the onion might be a little much (and I do like onions) but after taking off the bun I saw it was just a couple of outside layers of onion and not a full slice. I was excited to try it.

While the bun was toasted, there was nothing on it, as well no condiments on the table like ketchup or mustard. I knew the bun needed some kind of spread so I asked our server for a small side of thousand island.

Once I bit into the burger, the taste I had expected and hoped for was not really there. The patty was hand made, but it was not cooked enough. I always ask for medium rare so that I get the juice but this burger was very close to being rare with not only a lot of pink in the middle, but also not much heat. While the pickle spear tasted great on the side, the burger could use some pickles in it instead of with it.

It really had not cooked enough to get its flavor which was disappointing.

On top of that, the shredded lettuce (which I always prefer on a burger than just a single leaf) was not much and was only on one side of the burger. If the idea is to put the lettuce on the bottom so the bun stays intact instead of being in direct contact with the meat, the plan failed.

About half was through the bun was starting to give up on the bottom and that just means now I have a time bomb in my hands that I had better eat fast.  At no time did I truly get a good flavor of the burger.

It was hard to understand, it seemed as though they tried to do everything to make a good burger but they were just unable to execute it. While the ingredients were good and seemed fresh (including the bun), it just did not come together as any kind of burger I would go out of my way for.

Side Notes: Ordered a side of cole slaw and mac & cheese to try. The cole slaw was once again fresh and handmade, but had little taste and seemed dry to me. There was not much juiciness to it. The mac & cheese by far was the hero of the day. If you like cheesy mac & cheese, this is definitely for you – I really enjoyed it.  Looking at their website before we went, I noticed they had tater tots but once there they said that they no longer offer them. Instead they had some kettle chips which we ordered and they and basically were just chips out of a bag, nothing like the Hollywood Way, which makes them fresh to order.

Story Tavern receives: On the Marqee