I received as email from a reader that said we had to try the special burger that Tally Rand or Tallyrand? made on Friday.

I can never figure out if Tally Rand is one word or two since the writing above the restaurant is two words, yet the large sign out front has it as one word.

Tally Rand is probably best known for the late Huell Howser, who profiled the Turkey Sandwich at the restaurant six years ago. He probably was not there on a Friday.

So we went in on Friday and there it was – and it was the only mention in the restaurant – on a sign for specials that listed the NY Cheeseburger for $10.95, which is $1 more than their regular burger on their menu.

I am really not sure why it is called a NY Cheeseburger, there is no mention of it on the menu of any kind of specials menu on the table. But, of course, I am there to give it a try. 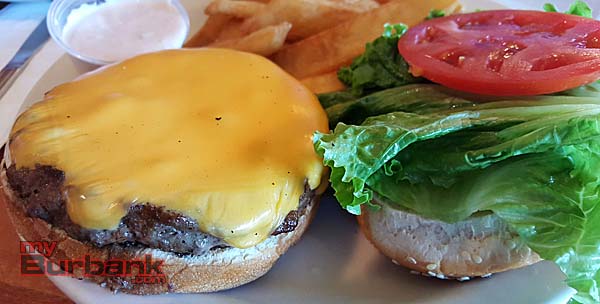 When the burger came I had to admit that I was expecting more. The burger came open faced on a plate – maybe everything at Tally Rand comes open faced like the Turkey Sandwich – and nothing on the plate jumped out at me.

It came with American Cheese that did not thrill me but it looked to be a liberal amount so I could live with that. It also came with a freshly sliced tomato, pickles and lettuce along with a small side of thousand island dressing. Maybe this could be something after all.

Both buns were toasted slightly and I was worried, as always, when I saw the patty resting on the bottom bun, which brings out my first disappointed reaction – soggy bottom bun!  I loaded up the burger and gave it a bite.

My first reaction is that the cheese was plentiful, but it just had that bland taste of American.  The patty was cooked correctly at medium-rare but there was just no taste to it.  This burger was good overall but really could have been so much better. It seems most cooks either don’t care or don’t know how to throw a little seasoning on their patties to really help enrich the overall flavor and experience for the old taste buds. 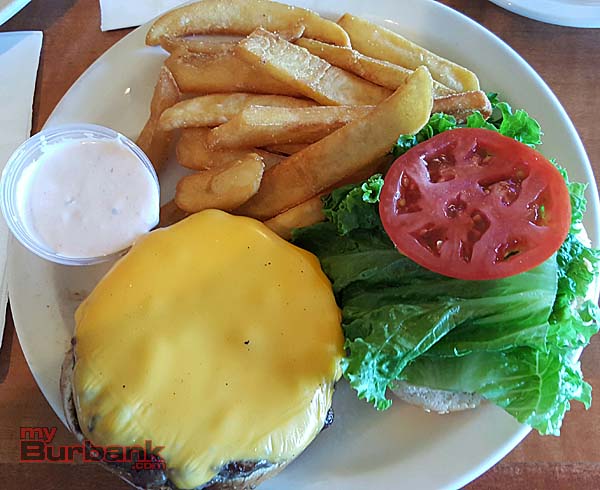 Like I said, the burger was good, but could have been so much more.  By the time I was half way done, the bottom bun was finally starting to give up the ghost and became extremely soggy. While the patty was cooked medium-rare, it meant that there was a lot of juice left in there and it had to go somewhere. That somewhere was the bottom bun that became one of those sad paper towels in the Bounty commercials.  It could only absorb just so much.

So the burger was good but not great and definitely not being considered as a Friday special that you would go out of your way for.

Side Notes: Of course, it being Tally Rand, the service was great as usual and it was busy. This is a Burbank staple when it comes to the local diner.  I was not really a fan of the steak fries but the cook did a good job of trying to get them well done for me. Tried the cole slaw and it was noting special and we tried their ‘world famous’ garlic bread which I could not figure out from which world it was famous from.  It was alright but ‘world famous’?

Tally Rand receives: On the Marqee