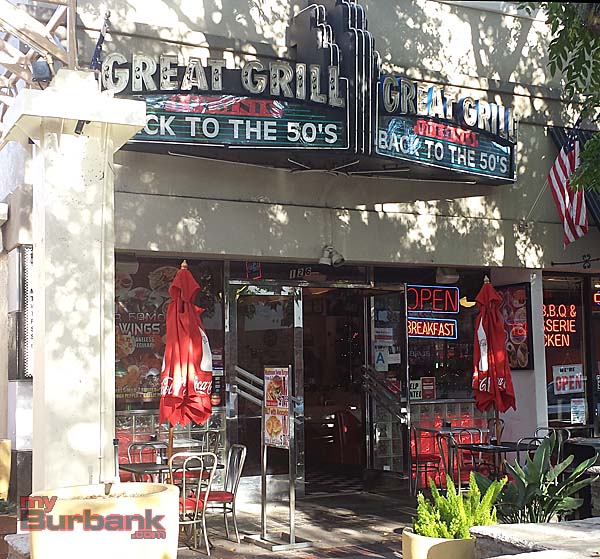 If you have been around Burbank for any length of time, you will remember that The Great Grill was a staple of Burbank with three or four locations. I was always fond of the one at Burbank and Edison.

This Great Grill is nothing like those earlier models. It has a 50’s feel inside with a hefty decorated decor. This one also sells beer and wine.

I ordered the Great Burger, which I figured would be their signature burger for a place called The Great Grill. It says it comes with bacon and avocado. Just for the record, I am not a fan of bacon on my burger (no, I am not a communist) because it usually does not come with any kind of flavor. I was able to order cheddar cheese.

Anyway, back to our burger.

When the burger came it looked interesting with some bacon showing. It was one of the few times that I actually saw the bacon being appealing on a burger and not just an afterthought.

After unwrapping the burger, I checked the bun, which was toasted, but plain. It seemed all the condiments (lettuce, tomato and the avocado) were located on the bottom side of the burger. Once I got the burger out of the wrapper I also found another of my bun nightmare scenarios, the bun was small.

After about the third bite, I found the bottom bun starting to self destruct and I knew I was going to be in for a mess at that point.  The star of the burger always should be the patty and in this case, it was not a star, maybe a star of community theatre, but not a burger star.

The patty looked to be of the same quality as the bun. It was tiny and no doubt a freezer was somewhere in that patty’s past. It was a huge disappointment.

While I sat there eating my self destructing burger, I was not enjoying the overall taste. The lack of meat made it taste as though I had ordered a salad burger and when I was done I had so much that had fallen on my plate I might as well have had a salad.

Side Notes: Finally a place to get the french fries well done.  They were a great, golden brown with some crunch. They were extremely plain and could have used some Lawry’s Seasoning Salt to spice them up. I am also a lover of cole slaw and these guys had some great cole slaw with some small piece of pineapple mixed in that really made it the most special part of the day.

The Great Grill receives: Could Use a Rewrite