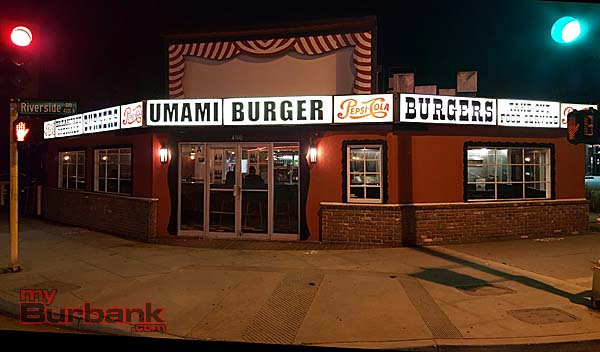 I got to be honest, I was not a fan of the ‘Show Burger’ at the old Hot Dog Show (see picture below) on Riverside and Rose. They used a frozen patty and did not use cheddar cheese (Oh , the humanity!)

So when Umami came in I was hopeful for a turn in luck. Yes, it is much better quality but there are some definite bumps in the road.

I found it strange that they kept the front marquee but all they did was paint it white with the frills of a stage still around it.  It was called the Hot Dog Show because back in the day they actually used to have a puppet show in the front with hot dogs as the characters.

Anyway your reading to find out about the burger, so lets go.

When I asked my server if he wanted to know how I liked it cooked, he said it comes medium rare. There is no other choice. Okay.  I would have ordered medium rare anyway so we were good. He also told me there were no substitutions to the burger, the way it is stated is the way it comes. Okay, but strange.

Once the burger came it was a little hard to recognize what I had, but it looked interesting and all of the ingredients looked fresh. It appeared the cheese was liberal, which I like, and everything else seemed as though it was plentiful.

Once I took a bite, I did see where all the flavors did work well together. As much as I like thousand island for a spread, I found it would not have worked with this combination.  The patty was medium rare and juicy and freshly hand packed. I was really starting to enjoy the experience.

Then came the reality check.

While the patty was nice and juicy, it was also resting on the bottom bun and you know what that means…yes, the soggy bottom bun syndrome.  By the time I was about half done, the bottom bun started to self destruct and I was having a hard time holding it together.  Near the end it was just about a lost cause. Yes, the bun is an important part of the overall burger experience and I have nailed two other burger locations because of the bun. Umami becomes the third.

Overall the bun is not large enough but is acceptable, it is just not acceptable to fall apart. Putting some kind of a condiment between the bun and meat might be advised. But because of that and the fact that it cost $14 for the burger, I expect better.

Besides that, I thought the burger was a complete winner, just can not give the top rating because of the bun experience.

Side Notes: Besides the burger, we also ordered the Truffle Fries (($6) and the Tempura Onion Rings ($6). The fries were shoestring and I asked for well done but they were a tad under and as we got down near the bottom the fries were more like worms – but they tasted great!  The onion rings were also very fresh and they came with some amazing dipping sauces – some mild and some spicy.  Finally, our server Josh recommended our dessert which was an oatmeal fresh baked cookie with ice cream – simply amazing!

Umami receives: On the Marquee