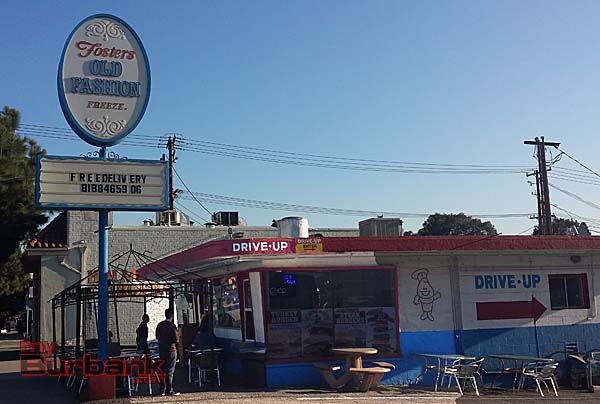 One of our readers suggested Fosters Freeze and at first I was reluctant because we are still not reviewing any chains (restaurants with over 5 locations). After I found out that Fosters is independently owned and operated, I decided to give them a try.

When you pull up it does not look very impressive and in fact, I don’t think it has changed a bit in over 20 years – except for ownership.

This is the business or a 1,000 signs – you may take 15 minutes just walking around looking at all their ‘special’ offerings. There is a menu at the window that just about has it all there. What is interesting is they say they have a steak burger. When I asked the girl at the window what the difference was between the two burgers, all she did was look at me a little confused and said that she did not know. She then explained that one was made of steak and the other one was not. OK

I ordered the combo special (regular burger meat) that was a cheeseburger, fries and a drink. I thought it was a good deal for around $7 although it still depended on the burger to see if I was right.

It took about 10 minutes to get our food and it was nice that it actually filled the tray. The cheeseburger was wrapped in the traditional Fosters bag and was then wrapped inside that at the halfway point of the burger. I was a little nervous since I was not asked how I wanted the burger cooked or my selection of cheese.

Ok, so after my observations, I was not expecting much. Taking my first bite, I was surprised that it had a great taste. Two things really exploded in my mouth, one being the thousand island dressing that was spread liberal enough to taste and he other was the cheese. I do not believe it was cheddar but it really stood out with a great taste.

Of course I am disappointed that the patty is not fresh and hand packed and there has to be something extra special for it to receive a top rating, like the chili at Larry’s.  This burger reminded me of the taste of Steve’s Burgers and it kept its taste throughout the devouring.

The bun fit the burger well and did not implode. It was a pleasant surprise.

I know some have criticized some of the reviews for not being more critical and tough, but I look at the total experience of just the burger. Number one, did I enjoy it? In this case, the answer is yes. For what I was expecting (Apollo), it was much better and held its taste. The bottom line is, no matter how good or bad the service, location and sides are, it’s still about the burger on it own. You can actually have good burgers that are not ‘Gucci’ burgers if that is what your budget and time allows.

Side Notes: The fries were golden brown and had seasoning salt, but could have been left in the fryer an extra two minutes – just not well done enough for my liking. I also ordered a side of their chile and while it was nothing special, it was a good dip for the fries although it was warm and not hot. Because I was at Fosters, it was mandatory to also order a Sunday at the end of the meal and while it was great, I thought it was way to expensive at over $5 for a what I considered a small cup. Remember, my side notes do not affect my rating of the burger, just trying to pass on a few extra tidbits.

Inspecting the burger, I found it to have all the right condiments including pickles, tomato, shredded lettuce. Both buns were toasted and there was thousand island dressing on BOTH the top and bottom buns. The cheese looked American and the burger was not hand packed and had probably been frozen at some time in it’s life.

Fosters Freeze receives: On the Marqee