Without further ado, it’s time to officially present the winner of the 2014-15 “myBurbank CUP” trophy presented by Trophy King and Gifts.

By virtue of its 96-56 victory over Burbank High for the past athletic calendar year, the Indians have won the “myBurbank CUP” for the second consecutive campaign. Burroughs won the battle for the inaugural silver CUP a year ago by a 79-56 score.

A challenge was presented to each school’s athletic departments to compete and earn enough points to claim the newest trophy in town.

This coveted and stunning trophy will be annually recognized for “the spirit of cross-town competition and the pursuit of athletic excellence.”

The “myBurbank CUP” presented by Trophy King and Gifts will be presented in June of each year to the athletic department of either Burbank or Burroughs High School. The trophy will remain at the winning school to showcase to its community until the winner is decided the following year and so forth.

The winner between Burbank and Burroughs was determined by the accumulation of points based on head-to-head varsity competition and athletic achievement (league titles, playoff success, bonus points for season sweeps against each other) during the school year. This pertains only to team competition and not individual achievement.

During fall competition, Burbank took an early 32-30 lead by taking the head-to-head battles (11-9) while tying JB in athletic excellence (21-21). The highlight of the fall was the first-ever CIF championship in Burroughs’ history when the boys cross country team won the CIF Division I title.

Burroughs responded with a strong winter by knocking off Burbank, 20-8. This included a 6-3 advantage in head-to-head matchups and a 14-5 victory in athletic excellence. 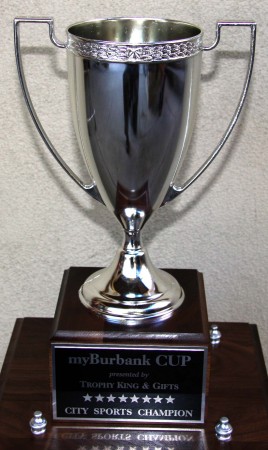 The spring sports season arrived with Burroughs holding a 10-point margin, 50-40, in the race for the “myBurbank CUP.” An anticipated close duel turned out to be a mere afterthought as JBHS poured it on with a decisive 16-7 win in head-to-head competition and a 30-9 advantage in athletic excellence as the Indians rolled behind the league titles won by their baseball, boys volleyball and softball teams.

Burroughs took the spring by a total of 46-16 which resulted in a convincing 96-56 win in cumulative points to take ownership of the second annual “myBurbank CUP.”

We would like to thank Burbank’s own Trophy King and Gifts located at 1509 W. Magnolia Blvd. for their incredible kind gesture and generosity. They donated this spectacular trophy that will be kept each year at the winning high school. Please visit at http://burbanktrophies.com or call at (818) 848-3566.

The trophy features a base where each year Trophy King and Gifts will inscribe the winner of that year’s competition in either blue for Burbank or red for Burroughs. 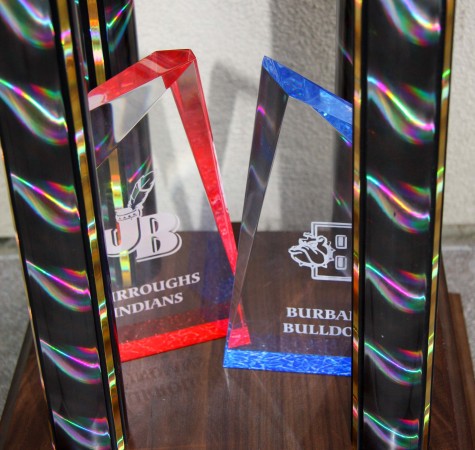 On top of the base are beautiful acrylic pieces that feature the logos of both Burroughs and Burbank High School.

The top of the trophy features a magnificent silver cup that will stand out in the trophy case for the winning high school each year.

Wear your red or blue with school pride. Each athletic event now carries more meaning in the city than ever before. With that being said, best of luck to both schools next year as the battle for the “myBurbank CUP” resumes.

Did you know by simply clicking on the green box in the Sports section on the myBurbank home page will directly lead you to last year’s and this year’s “myBurbank CUP” results? Everything you need to know and more is there. Check it out!

Here are the 2014-15 results sport by sport; contest by contest; season by season- 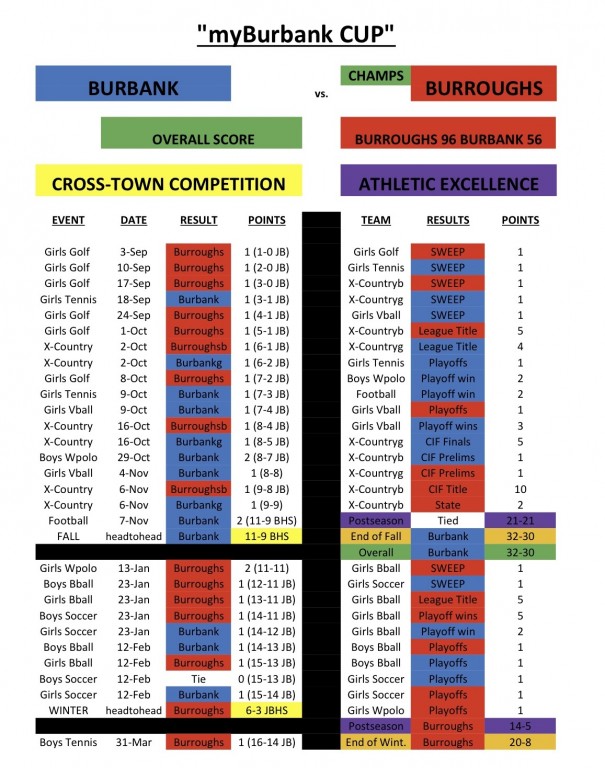 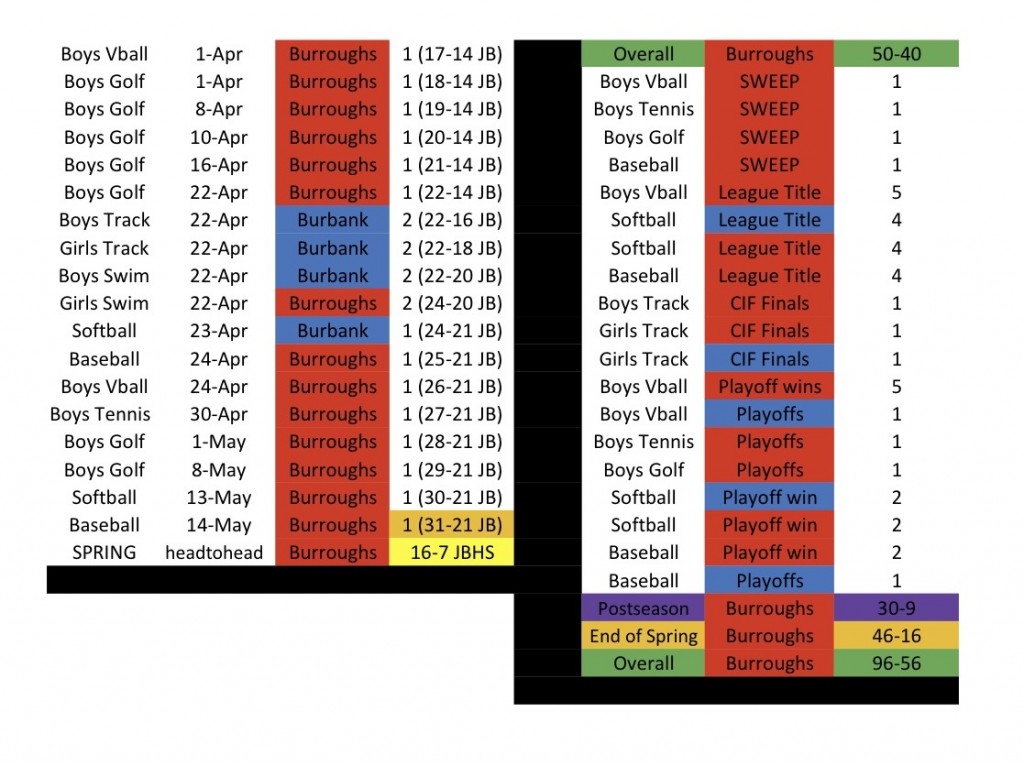