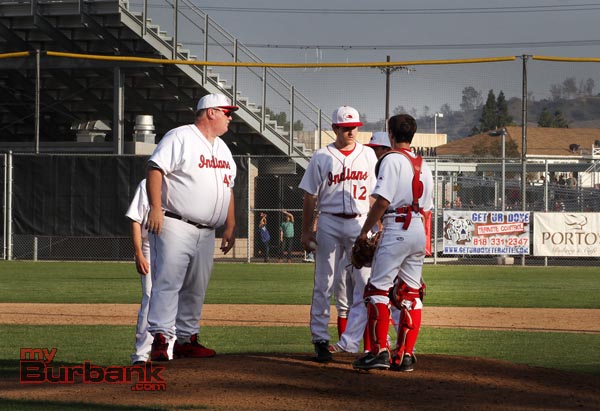 Coach Craig Sherwood talks with Spencer Malden and catcher Tyler Lewis during a recent game (Photo by Ross A. Benson)

It’s that time of year again. The birds are singing, the animals are playing, and it’s time for Burroughs baseball.

The city of Burbank is the media capitol of the world and down on Keystone Street at Tomahawk Field on the campus of John Burroughs High School, the Indians have put together a nice script for all to read. Now it’s time for the production of the show.

Quiet on the set. Here are your 2014 Burroughs Indians. Lights, Camera, Action!

There is a new sheriff in town and he isn’t Reggie Hammond. 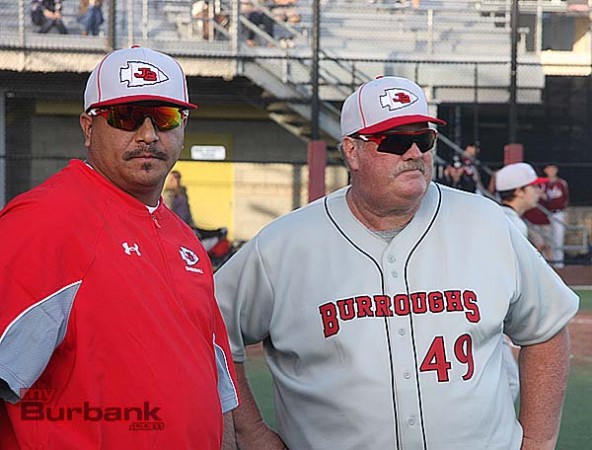 In a homecoming that seemed inevitable and destined to happen again at some point in his life, Sherwood has returned to Burroughs where he previously coached in 1984-85 and 1996-00 as an assistant varsity coach winning a league title in 1997. More significantly, Sherwood is a 1976 graduate of JBHS and has lived in the Burbank community his whole life.

“It has always been great to be an assistant coach at Burroughs, but to be the head coach is an incredible honor and very humbling,” Sherwood said.

All in the Family

Upon being named the new head coach, Sherwood surrounded himself with three brilliant baseball minds all of whom graduated from Burroughs. Tommy Perez (’98) and Tony Sandoval (’99) coached alongside Sherwood at BHS the past three years where they won a league championship last spring. Brian Huston (’83) joined the Indian staff a few months ago. 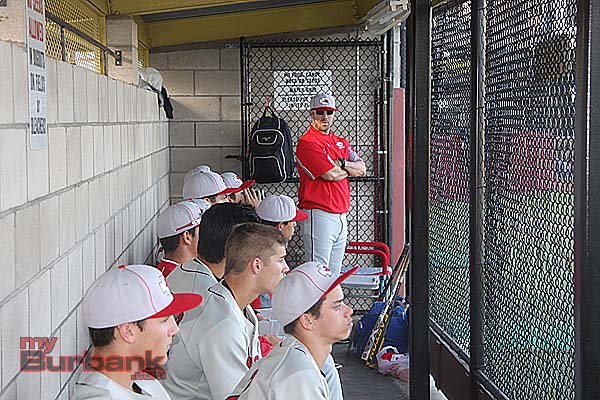 “They know what it takes to win because they were a part of the winning team in 1997 when we were all here together. I trust them. They know what they need to do,” said Sherwood in reference to Perez and Sandoval. “They understand the system and the program. I have nothing but confidence in letting Tommy run the offense and Tony the pitching. And we brought in Brian who has been great in supporting us and being that extra coach to help us across the program.”

The last time Burroughs won a league title was in…..1997. Will history repeat itself with the three amigos?

For the past six months, Sherwood has changed the landscape of Burroughs baseball into one that he hopes will breed success on and off the field. The Indians don a new baseball logo along with new uniforms and caps. The stadium was re-painted bright red with “Burroughs” prominently displayed across the home dugout wall. 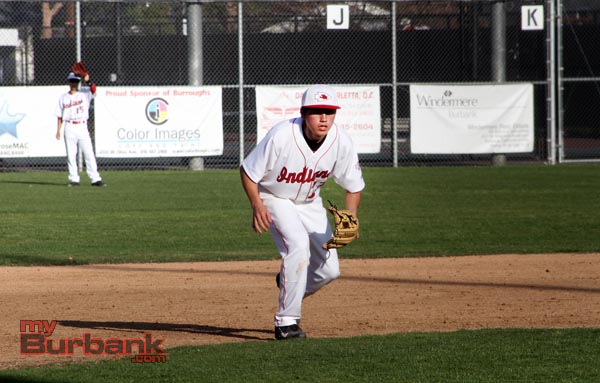 A new infield and mound were installed as well as a new home plate where games will be decided through the air and by land.

Attention to detail with fundamentals on the field and academics in the classroom has been emphasized since Sherwood’s arrival. The program’s vision has been shared and bought in by this year’s squad.

“I’m very excited for this season. We’ve worked very hard for the last six months. We are in a good place right now,” Sherwood said. “The kids have decided what we are doing is going to work and hopefully will execute when needed. These boys are very conscientious on how they do things. They want to do well. I can see it in their eyes. They are starting to believe in what we do.”

For Love of the Game

This year’s edition for Burroughs features only five returning varsity players from a year ago and only one with significant experience, outfielder/pitcher Cameron Rodriguez. The 5’10” tough-nosed senior will provide valuable leadership to a team in desperate need due to lack of experience.

“We are a gritty team. We have guys that will fight to win no matter what,” Rodriguez said. “We have a will to win. The inning is never over and that’s how we are going to base our season on.” 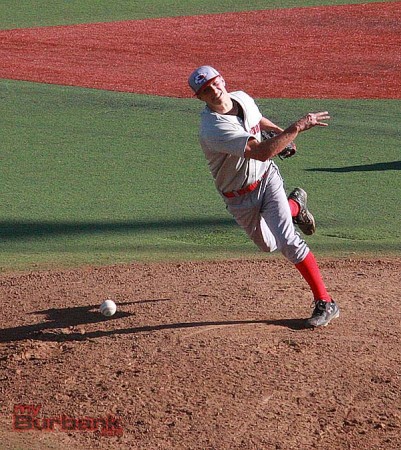 Senior transfer Cole Meyer has given the Indians pitching staff a huge shot in the arm with his hard-throwing side-arm delivery that baffles the opposition. The Indians will roll the dice on Meyer who came from Las Vegas to Burroughs late in the summer.

“He has really added another dimension to our pitching,” Sherwood said.

Meyer will be the ace of the staff and a future college prospect. Hopes are that Burroughs will hit the jackpot with “Vegas” Meyer and lead them into the playoffs.

“I’m super excited. We have new coaches here and we have come together as a team and I’m looking forward to the season,” Meyer said. “We all have to pitch and do our part. Bunt, steal, pinch-running. Everyone has to contribute. Everyone has a job on this team and we need to execute.” 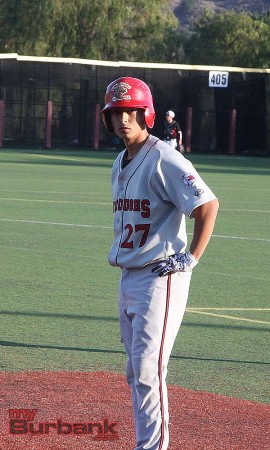 After playing 40 games during the off-season in the past six months, Burroughs takes the field this spring with unbridled enthusiasm.

“It’s important to make the playoffs. We are going to try to win every game that we play,” Sherwood said. “You have to learn how to win as much as winning itself. I hope to battle in every game and have positive results.”

Burroughs hopes that its “Field of Dreams” will be a special one in 2014.

Craig Sherwood talks with Spencer Malden and catcher Tyler Lewis after a pitching change during a recent game (Photo by Ross A. Benson)

Junior Chris Peres looks to drive a pitch (Photo by Ross A. Benson)

Centerfielder Aidan Anding attempts to throw out a runner (Photo by Ross A. Benson)

First Baseman Chris Peres readies for the next play (Photo by Ross A. Benson)

Teammates welcome Cole Meyer into the dugout after a 1,2,3 inning (Photo by Dick Dornan)