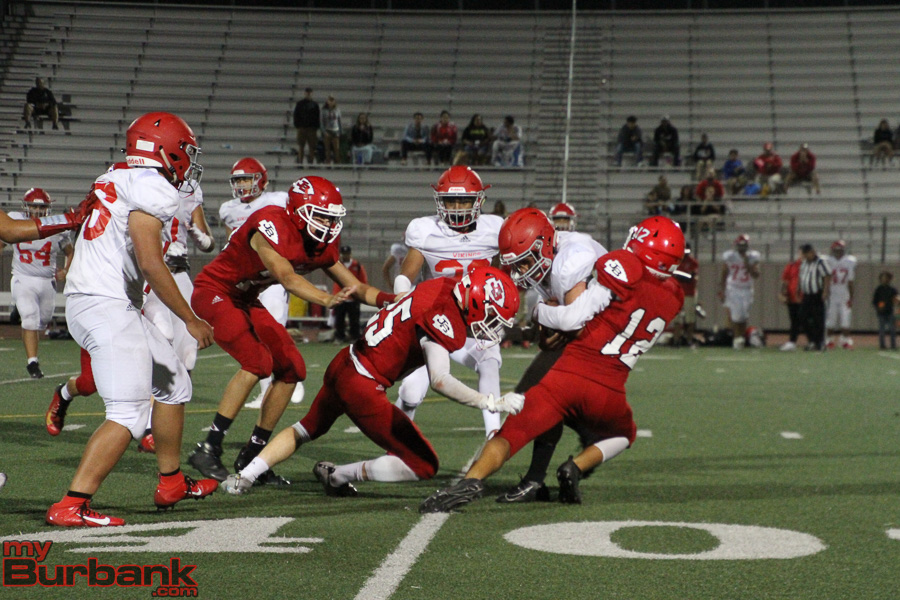 As season openers go, this wasn’t perfect, but it was more than satisfactory as the Burroughs High football team turned away Hueneme 59-18 in a nonleague match at Memorial Field on Thursday.

Much of the night belonged to quarterback Nicholas Garcia, who passed for five touchdowns and ran for another.

The Indians essentially did what they wanted in the opening half as they forged ahead 46-12 at the intermission, while the second half was played with a running clock.

A season ago, the Indians went 2-8 with their only win on the field coming against Glendale and the other victory was a forfeit by Hoover, which didn’t field a team over the latter portion of the season after some of its players were involved in an on-campus fight.

The Tornadoes won’t have a football team for two seasons.

So this was a good way to commence the season even if it was against a short-handed Vikings bunch that dressed about 20 players, with many playing offense and defense, which is truly tough.

“It being the first game, there was a lot of first-game issues at all phases and that’s the stuff that we need to clean up,” second-year Burroughs coach Rand Holdren said. “We are still growing  We are still learning all phases, and I really like this team. We have a lot of weapons. We need to focus on using them properly and not getting ahead of ourselves. As games go on, we’re going to use that and being efficient.”

What is Holdren’s overall goal for the team? “We want to be the best we can be,” he noted. “That means to be the best football players we can be. I’m more concerned with us reaching our full potential.”

Garcia sparkled in the opening half when he connected on 12 of 22 attempts for 182 yards with four scoring passes.

In short order, the Indians (551 total net yards) moved ahead 6-0 on their initial possession as Garcia drove the squad 74 yards on eight plays, capping the excursion with a 10-yard strike to senior wide receiver Carson Cardenaz (45 yards on four receptions) as 9:45 remained in the initial quarter.

“We just executed. We have a lot of things to work on, on offense, especially,” said Garcia, a senior who passed for 205 yards while hitting 14 of 24. “It was a good team win. Our guys hustled and played with a lot of heart.”

Garcia went on: “We’re taking it one practice at a time. If we do good in the practice, that’s a goal we accomplished,” he said. “If it’s a sloppy practice, if we’re not executing, guys messing around, whatever, it’s not a great practice. So we come out the next day and take it day by day.”

Burroughs recovered a pooch kick at the Viking 45 and two plays later, bolted ahead 13-0 when Garcia found Cardenaz with a 22-yard strike as 8:52 was left.

After forcing a Vikings punt, Garcia guided the Indians 12 plays while covering 75 yards as junior running back Luke Rogers (32 yards on eight carries) scored from four yards with 3:53 remaining for a 19-0 edge.

“I love playing defense. That’s super fun for me. I actually started off as a sophomore catching kick returns for varsity. Now that I’m on offense, defense and kick return, I’m going to try and juggle it all without being super gassed during the game because I don’t want to let my teammates down and I don’t want to mess up because I’m tired. I want to continue doing everything.”

Forrester, who had one interception against Hueneme, said the team should be improved.

What do the Indians need to do in order to improve?

“They’re little mistakes and that we’re there right now, but we need to put in a little more effort and then practice on the details and then we’ll be good,” Forrester said.

The next time Burroughs had the ball, Forrester (114 yards on three carries and 57 yards on three catches) needed one play to burst through for an 83-yard score as 9:16 remained in the second quarter and the Indians’ advantage was extended to 39-12.

When Garcia’s 20-yard aerial found Forrester with 4:56 was left before the half, the Indians, who marched 49 yards and consumed six plays, held a 46-12 edge.

The second half began as the opening half did, with a touchdown as Garcia rifled a 23-yard toss to sophomore wide receiver Elijah Aldana-Pere (55 yards on four receptions) as 9:14 remained in the third quarter as the Indians shuffled ahead 52-12.

Senior running back Adrian Leon (52 yards on seven rushes) scored the Indians’ final touchdown, a 15-yard tally with 9:14 left in the fourth period as Burroughs had a 47-point cushion.

Hueneme junior quarterback Ethan Neos (nine of 20 for 101 yards and one interception) had three scoring passes with two landing into the hands of junior wide receiver Manuel Ortiz (50 yards on four receptions) that covered 10 yards and came with 2:15 left in the first quarter that cut the lead to 26-6 and a 22-yard bomb with 3:45 showing in the fourth period that sliced the edge to 59-18.

Neos also proved to be a slick and steady ball-carrier as he accounted for 58 yards on 10 carries for the Vikings (185 total yards).

The Indians will host Victor Valley next Friday night at Memorial Field with a 7 p.m. kickoff.