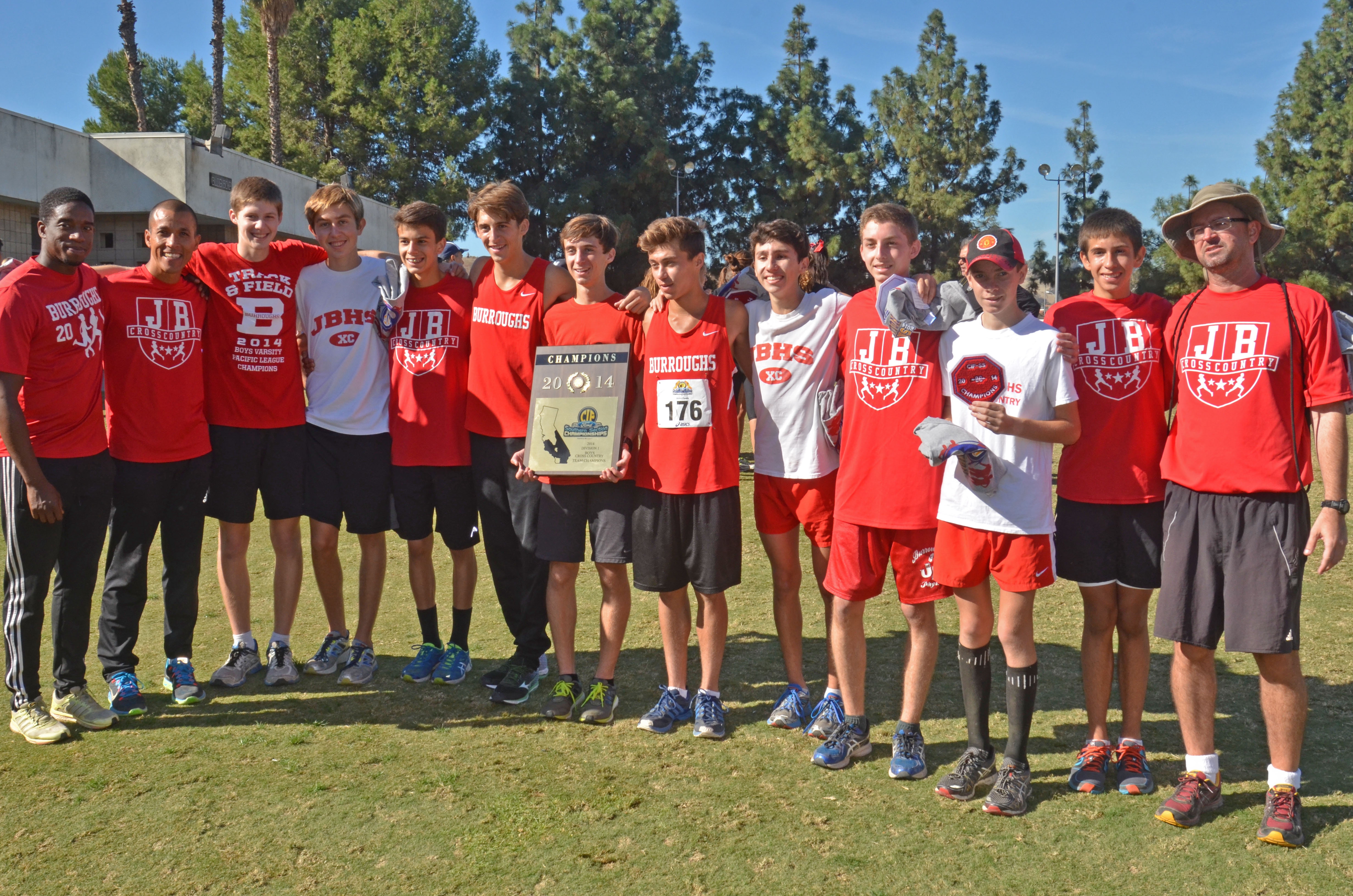 History was made last Saturday at the CIF Southern Section cross country championships. For the first time ever in the school’s history, John Burroughs became a CIF Champion. Behind an inspiring and dominating effort at Mt. San Antonio College in Walnut, the Burroughs boys cross country team won the Division I CIF championship.

“It means the kids earned it. In my twenty years of teaching and coaching at Burroughs, I have always been proud of any kid, whether it be in one of my classes or on one of my teams, who works hard to do their best,” Coach John Peebles said. “The end result is the end result, but what did you do to get the end result and how did you go about doing it?

“Those last two things are what matter the most because it is something that an individual has control over. The championship on Saturday was nice, but knowing and seeing what the kids did before Saturday is what I am happiest about.”

After conquering the Pacific League for their first league title since 2005, the Indians put forth a championship result with everyone contributing to the monumental moment.

“The kids raced smart and together and that allowed them to produce a great result,” Peebles said. “We did not have a runner in the top fifty, maybe even sixty, places at the mile mark and finished with five in the top 23 and a 17 second gap between our No. 1 and No. 5. All of the credit goes to these kids for running for each other and running to the best of their ability.”

From 1948 to the present, no team had ever won a CIF Championship at Burroughs….until now. Now the boys cross country team has set the standard of excellence for future Indian teams to emulate.

“I am just happy for the kids,” said Peebles. “If this was the school’s 10th CIF team title, would it mean any less to these kids? Heck no. These 10 kids went out and earned a CIF title with their effort and determination. It is all about the kids.”

The Indians now advance to the State Championship meet in Fresno this weekend.

*First CIF Team Championship in the History of Burroughs (all sports) 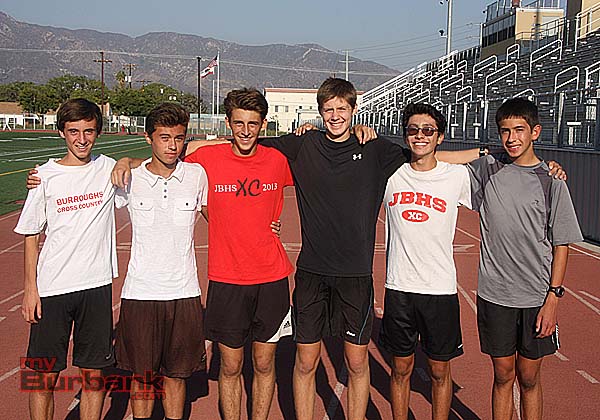 Don’t look now but there could be a new league champion crowned in boys’ cross country. With Pacific League Finals set for November 6, the Burroughs boys cross country team is embarking upon unchartered terrain.

After winning the first two league meets of the season on September 25 and then again on October 16, the Indians are zeroing in on capturing their first league title as a member of the Pacific League.

In a league that has been ruled throughout the years by powerhouse Arcadia mixed in with strong performances by Crescenta Valley and Burbank, Burroughs has been by far the most consistent and dominant team this year.

Burroughs, ranked No. 4 in boys cross country in CIF-SS Division I, won the Pacific League opener at Crescenta Valley Park. The Indians were propelled by senior Garrett Boulais who took second place in a time of 15:47 followed by senior Elias Hoxsie in third (16:06), junior Justin Villagran (fifth- 16:16), freshman Alexander Hirsch (sixth- 16:18) and senior Shane Thompson (seventh- 16:18). Burroughs defeated Arcadia, 20-35, for the first time since joining the Pacific League in 2006.

“Beating Arcadia shows that we worked hard over the summer,” Boulais said. “Last year, we missed CIF by one spot so we really wanted to come back strong this season. Throughout the summer we stayed strong as a group and did our best.”

“It feels great to be beating these schools,” Villagran said. “It shows how hard we have worked and we hope to maintain it for the future.”

With 25% of each league meet counting towards the overall team title, Burroughs now heads for the home stretch and a league title within their grasp. The Pacific League Finals are worth the remaining 50%.

The Indians have had a strong season overall competing well at the Cool Breeze Invitational in Chino, Rosemead Invitational, Mount Carmel (San Diego) Invitational and recently at the Kenny Staub Invitational where Burroughs took the top four spots in another fabulous team performance.

“It felt really good to just run strong as a pack and basically dominate the whole race overall,” said Thompson. “We are really doing well as a team.”

The Indians resurgence can be traced back to the last couple of years where they suffered several tough defeats at the hands of the Apaches, Falcons and Bulldogs.

Burroughs coach John Peebles has seen the growth of his program first-hand and attributes the Indians success this season to past experience, team depth and a positive work ethic.

“Over the last couple years we have kind of taken our lumps. When you run in a league with Arcadia, Crescenta Valley and Burbank who have been strong over the years, it definitely makes it tougher,” Peebles said. “But the guys noticed and paid attention. They knew they had to get better and better in order to try and win league. Running in this league has definitely paid off. We had to face the challenges and we have.

“As you go year to year, your goal is to do better at the course. You are also competing against the people you are running with. The biggest thing is to prepare at practice to go out and run the best race you can when it’s time to race. It’s your job to put yourself in the position so that when you toe the line and you go run, you are running the best that you can on that day.”

The Indians have responded well with a concerted effort to being a team on and off the trails.

“Over summer we decided that we needed to bond more outside of practice,” Hoxsie said. “That way in practice we could push each other with more meaning. We wanted to form a brotherhood so we could work harder as a group.”

Additionally, the Indians are well-balanced with various types of runners who have all contributed to the team’s development.

“What’s interesting about us is the diversity of the group. Each of us brings something different,” Howe explained. “Garrett and Justin are big into endurance running and could go forever. Shane and Elias have the fast-twitch muscle fibers so they can sprint really fast. Alex seems like he has been running since the dawn of time. I’m just trying to find my way amongst this team and work with them so we can all be successful.”

One surprise has been the emergence of the Indians next superstar, Alexander Hirsch. Only a freshman, Hirsch has brought much needed depth to a squad who has goals beyond a league title.

“I’m just so thankful to be on this great team,” Hirsch said. “Running with these guys has been a great opportunity to push myself. I learned that hard work can really pay off.”

Advancing to the CIF Finals at Mt. SAC and then to the State Championships in Fresno are the ultimate goals. But for Peebles, now in his 19th season as JBHS head coach, just seeing personal growth is enough satisfaction for him.

“Going to the State meet would be nice; going to CIF Finals would be nice; winning a league title would be nice,” he said. “To me I just want to see the guys and the girls get better. I want to see progression. Then you can judge every kid the same way. That’s my definition of success. Now if you can have team success along the way, then that is something extra.”

Down deep inside, a league title would mean so much to the Burroughs team and program. Boulais has played a major role in the team’s success and he would want nothing more than to give Peebles a much-deserved league title before setting their sights on CIF Prelims and beyond.

“As a senior, I want to go out on a good note. We want to do our best,” Boulais said. “Our main goal is to make it to State but we’ve never won a league title in this league so that would be nice to give to coach.”