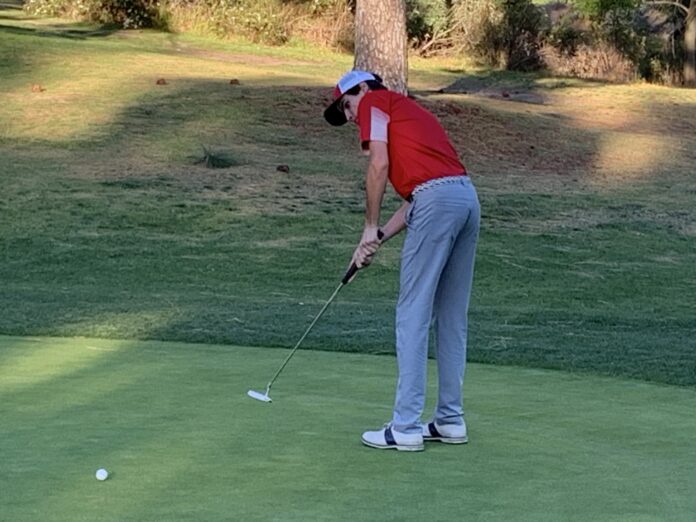 The second Pacific League boys’ golf match got off to a late start Tuesday at DeBell Golf Course, leaving little time for some groups to make it in before darkness.
But the final results were not bad news for Burroughs High, which easily won once again as it hopes to win the league title for a second consecutive year.
On a day that saw quite a few scores lower than the norm, Burroughs senior Lincoln Melcher was his usual self, shooting a 2-under-par 69.
“It was a little windy today, but nothing too crazy.  The pin positions were in tough places,” the UCLA-bound star said. “I thought I played pretty well. I had not as many birdies as I would have liked but I kept it under control and birdied the first and last hole.”
Teammate Emilio Huerta finished shooting an even par over 18 holes. Just a junior, Huerta shot 33 on the upper nine holes.
Sophomore Adriel Abaoag, who once shot 60 at DeBell, had a solid day by shooting 75. Dylan Vallejo shot 80, followed by John Peltier and Brodie Kemp, who both showed key improvements. Peltier shot 87 and Kemp was at 93.
Arcadia High finished second, followed by Burbank High which was third. Crescenta Valley finished fourth and Pasadena was fifth.

Luke Carnegie led Burbank by shooting 78. Zach Ducore, who had been Burbank’s top competitor in the first league meet, shot 83. “The course was playing pretty nice. The greens were a little difficult to read but that is typical of DeBell. We had fun out there. We didn’t play our best but having fun at the end of the day is all that matters,” said Ducore.
Also for Burbank, Aidan Clendenin shot 83. Brenton Lewis shot 89, Ryan Labus shot 90 and Curtis Peters shot 98.