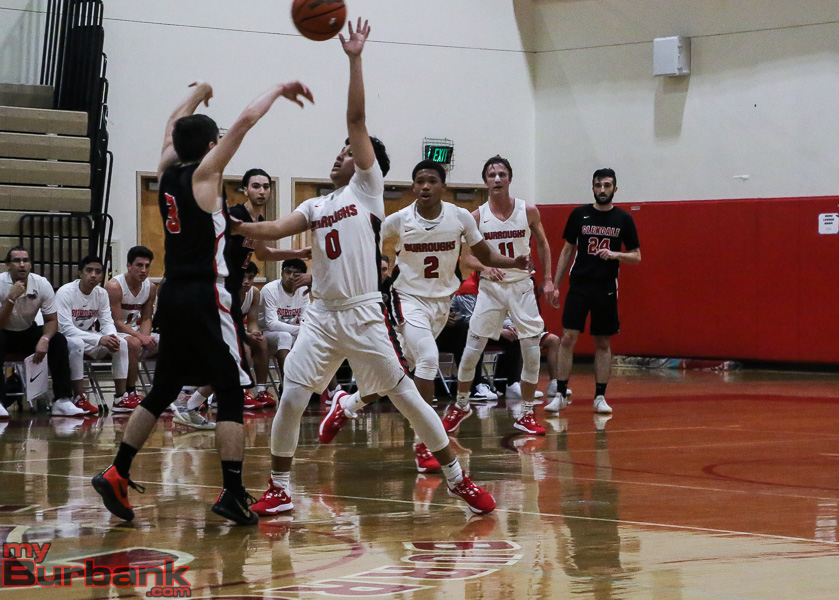 For nearly 29 minutes of the scheduled 32 minutes, the Burroughs High boys’ basketball team was either tied or in front against visiting Glendale in the Pacific League opener on Tuesday night.

What happened across the last two-plus minutes undid what transpired earlier as the Nitros rallied for a 61-52 victory.

In the fourth period, Glendale outscored Burroughs 27-15 after connecting on eight of 13 from the field and drilling nine of 10 free throws.

The Indians made six of 12 from the floor and two of three from the charity line in the same period.

The match was deadlocked at 14-14 heading into the second frame, but the Indians shimmied ahead 27-20 at the half before bolting in front 37-34 after three frames.

An important moment came when junior point guard Arthur Chebishian (14 points) stole the ball and then raced down court for a layup with 2:30 remaining as Glendale seized a 48-46 lead.

With 1:52 left, a three-pointer from senior swingman Manouk Manoukian (14 points) handed the Nitros a 51-48 edge.

Manoukian finished with a game-best three from three-point range, nailing one in the first, third and fourth quarters.

Chebishian’s hoop made it 53-48 with 1:29 on the clock, which forced Coach Allan Ellis to call time out.

Another key statistic was Glendale’s ability to make its three-pointers. On the night, it sank eight compared to Burroughs dropping in three.

Senior point guard Nicholas Garcia paced the Indians with a team-high 16 points and hit one three-pointer.

“They [Glendale] battled on the defensive end and we couldn’t get stops and that was the deciding factor in the game,” said senior swingman Emery Goulet, who scored 13 points, including nine in the opening half.

Goulet went on: “It comes down to the intensity and defensive energy on the defensive end and they made shots and we didn’t,” he said.

Even with the loss, Goulet still believes the team will respond.

“I love my guys,” he said. “I’m behind them until the end. I think they can bounce back and make some noise this year.”

Garcia scored eight points that included a trey in the initial frame while Chebishian dropped in two three-pointers for six points.

Goulet had his most-productive quarter in the second tallying seven points with five points coming via free throws as Burroughs converted four of 16 from the field and five of five from the charity line.

The Nitros, who shot 25.9 percent at the half (seven of 27) were held to six points in the second period after making two of 13 from the floor.

The Indians drilled 29 percent of their shots at the intermission (nine of 31) and eight of nine from the free-throw line.

Glendale senior swingman Manny Kapoushian (game-best 17 points) scored eight points in the third quarter with six points being derived from free throws. The Nitros converted nine of 10, but only two of eight from the field.

The Indians drained four of 12 from the floor and one of two charity tosses in the third stanza as Garcia scored four points.