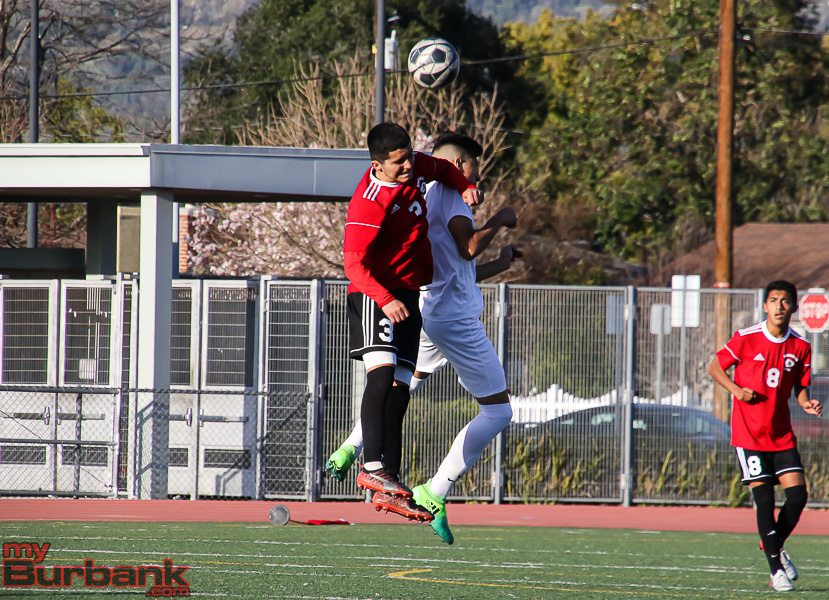 Facing a superb defensive team, the Burroughs High boys’ soccer team had to find some room in order to get off shots.

Montebello wouldn’t allow much space and dominated the action from the outset on Wednesday afternoon at Memorial Field in a CIF Southern Section Division III first-round playoff match.

The Oilers scored two first-half goals and then tacked on two more while the Indians managed just one tally and lost 4-1 before a supportive crowd.

Burroughs’ lone score came in the 52nd minute when junior forward Elias Galaviz knocked in a penalty kick from inside the box after a hand-ball violation that trimmed Montebello’s advantage to 3-1.

Not to be overlooked are the 10 seniors on the Burroughs squad and they are midfielder Dylan Mahoney, defender Manny Pascual, midfielder Elijah DuMonde, midfielder Juan Carlos Rosales, defender Abihud Munoz, midfielder Colgan Martin, defender Carter Wells, who was injured for much of the season with a torn ACL, midfielder Kobe Estrada, forward David Gerlach and goalie Hyatt Entz.

These players helped the Indians place second in the Pacific League this season and first last year.

“They shot that attack very well and made it very difficult for us to find our rhythm and to find space for ourselves,” said Komada, who took over for his father, Mike, midway through the season.

Beside Montebello’s defensive stickiness, it was also marvelous at being on defense and then transitioning to offense.

The Oilers (17-5-5 and 8-2 for a three-way first-place tie in the Almont League) scored their initial goal in the 13th minute on a corner kick from junior midfielder Luis Estrada that somehow deflected off sophomore defender Wilson Harting’s foot and into the net.

Two minutes later on a set piece, Montebello stretched its lead to 2-0 on a 15-yard laser from senior forward Edgar Alegria.

“Never just stop giving up and keep on playing,” said Alegria, Montebello’s leading scorer with 10 goals. “It was just communicating. Moving it around. We all played amazing.”

The Oilers seized control 3-1 when junior midfielder Cesar Monsivais drilled a 15-yarder off a free kick in the 49th minute.

“We apply pressure. I think when you apply pressure to a team, they have to think quick and they lose it sometimes and then we want to attack,” said Montebello coach Jesus Garcia, who has led the Oilers to 11 league titles in 15 seasons. “Once we get that first one, it’s a totally different mindset.”

In the sixth minute, Monsivais’ 30-yarder sailed over the crossbar and a 35-yarder by Monsivais in the 12th minute was off.

Gonzalez is Burroughs’ top goal scorer, but on this day was bottled up and couldn’t get off high-percentage shots.

Gonzalez then added a 28-yard penalty kick in the 23rd minute, but it was wide right.

A direct kick from Rosales in the 38th minute didn’t find the target and a 25-yard from Monsivais in extra time also missed.

Sophomore forward Edgar Lopez’s 20-yarder in the 48th minute didn’t locate the target for the Oilers and Galaviz’s 24-yard direct kick in the 52nd minute missed.

Alegria’s 30-yarder in the 59th minute failed, five minutes later Alegria’s 15-yarder was too high and Estrada’s 25-yard free kick in the 68th minute was off.

In the 76th minute, a 30-yarder from Rosales failed and Gonzalez’s 38-yarder in extra time was also off.

Burroughs jJunior goalie Jacob Cardenas was at times under siege while junior Mark Gamez had it much easier.