Like a light drizzle that becomes a steady downpour that turns into a deluge, so to was it for the Burroughs High boys’ volleyball team that started slowly before becoming a whirlwind in Saturday’s CIF Southern Section Division II quarterfinal match against visiting Camarillo.

It was a four-game extravaganza that the No. 3 seeded Indians pulled out 26-24, 20-25, 25-20, 25-8, behind the usual suspects and advanced to next Wednesday’s semifinal clash on the road versus Valencia, the No. 2 seed and No. 1 team from the Foothill League. 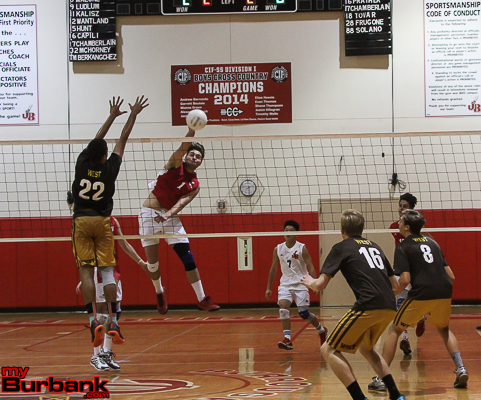 “We just wanted to reset and clean up our mistakes,” said Dalmada of the second game. “We didn’t want to underestimate them and come in cocky. This was a good test for us.”

If Burroughs (30-3 overall and 12-0 in the Pacific League) had not taken the initial game, and had the other three gone the way they did, the Indians, who have won six consecutive league titles, a fifth game would have been necessary.

“We saw growth out of our guys,” said Burroughs coach Joel Brinton. “We followed the game plan. We made a bunch of errors in the first game. This was a big step forward.” 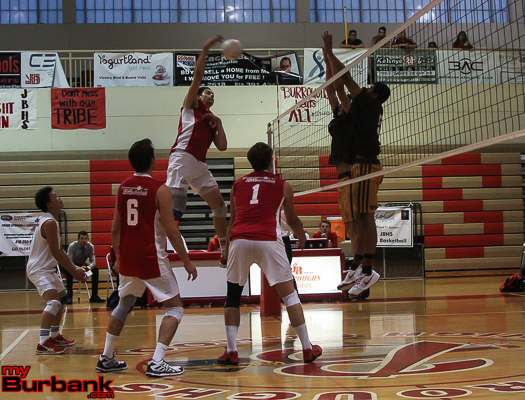 Burroughs, which knocked off La Sierra in four games in the second round and West Torrance in three in the opening round, found a way to capture the first game, and despite losing the second game to the Scorpions, bounced back and grabbed the next two.

The Scorpions pulled ahead 13-9 and 17-14 on a winner from senior outside hitter Matt Yoshimoto, who had a match-best 19 kills, and will likely play for Moorpark College after being shown interest from several Division I programs such as the University of San Francisco, Cal State Northridge, and UC Santa Barbara.

Sensing that the game was slipping away, the Indians buckled down and tied it at 18-18, 19-19 and 21-21 on Chamberlain’s winner. The Scorpions leveled it at 22-22 when Chamberlain’s serve crashed into the net.

“We knew No. 3 [Yoshimoto] was their best player,” said Chamberlain, who will play volleyball for Pepperdine. “We wanted to try and shut him down early. I think that we need to work on our communication. I need to spend more time with the starting group.”

It was even at 23-23 and 24-24 on Yoshimoto’s two kills, before the Indians picked up a point on Carter’s rocket and junior setter Ryan Van Loo’s tapper that clinched the game.

Not wanting to fall behind two games to none, Camarillo, seeded No. 10, led 11-2 as Tendler had a kill and four service aces during this stretch. 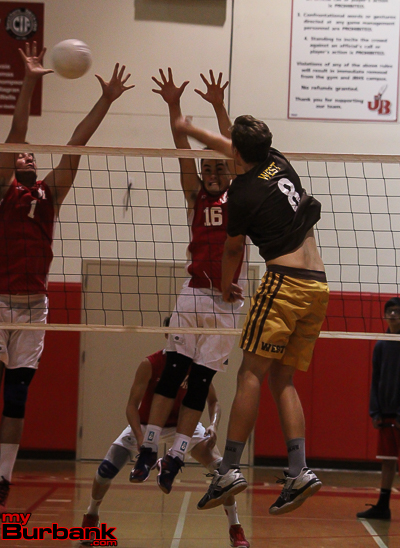 Bailey Carter and Cameron Capili, shown here against West Torrance, had strong games vs. Camarillo (Photo by Ross A. Benson)

The Indians came back and won six consecutive points that trimmed the margin to 11-8 with Dalmada getting a kill and a service ace, while Capili added a kill and Van Loo, who finished with 41 assists, contributing a block.

The other two points came when sophomore setter John Paul Dillard and Yoshimoto each rifled the ball out of bounds.

Camarillo, which finished tied for second in the newly-formed Coastal Canyon League at 4-5, then took five of the next eight points and charged ahead 16-11 on Tendler’s wallop.

The Scorpions took a 21-18 advantage when Capili’s drive sailed into the net, and sealed the Indians’ fate by capturing four of the next six points, with Yoshimoto making it 24-20 and Tendler’s game-winner.

“I thought our confidence level was good in the first set, but then it started to slip away,” Camarillo coach Rob Vandermay said. “We needed to get our confidence and energy level up. It seemed like we lacked consistency in the third and fourth sets, and Burroughs took advantage of that.”

Burroughs never trailed in the third game and led 11-5 on Dalmada’s bullet and 13-8 when Yoshimoto’s rocket drifted out of bounds.

The Indians forged ahead 16-11 on Dalmada’s smash, before pulling ahead 20-14 on Chamberlain’s hammer.

Camarillo would edge to within 24-20 on Yoshimoto’s block, but it would be over for the Scorpions when Dalmada responded with a game-clinching kill.

“I thought we were too one dimensional,” Vandermay said of Yoshimoto and Tendler, who had seven kills. “We were too predictable. But at least I know that we got beat by a good team. We made errors, but they beat us.”

After the fourth game was level at 3-3 on Dalmada’s long serve, the Indians jumped in front, 11-5, and then outscored the Scorpions, 12-2, that made it 23-7 and included Capili’s three kills.

Match time is set for 7 p.m. at Valencia on Wednesday. This is the furthest a Burroughs boys volleyball team has ever advanced.

Photos of the West Torrance match: