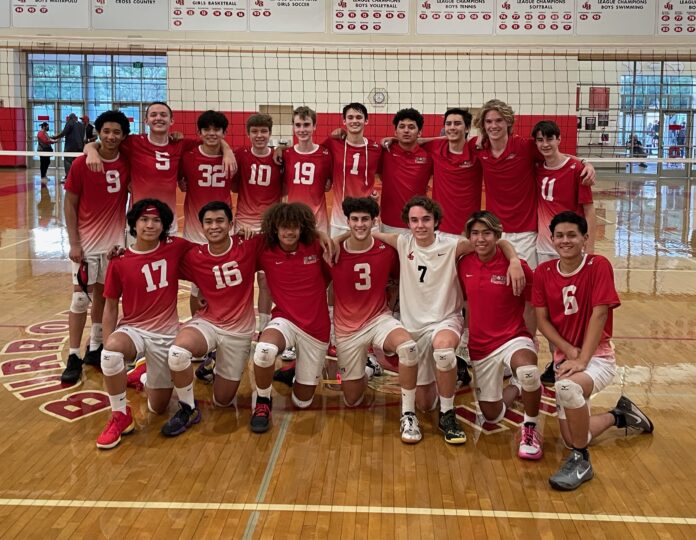 It’s been nothing but an unusual year for the Burroughs boys’ volleyball team, but once the Bears got the nets up, they were ready to roll.

The Bears’ challenging season continued on into a difficult CIF Southern Section Division 2 quarterfinal match against the No. 2-ranked Huntington Beach team.

The No. 10-ranked Bears, who’ve played just 10 matches in an unconventional season, were tested early in the first game and found themselves in a deep hole midway.

But, still, Burroughs marched on and came alive in the second set to try to keep their postseason run going.

Huntington Beach, however, stood firm in the second game and went on to sweep Burroughs, 25-16, 26-24, 25-16, and clinched a spot in the Division 2 semifinal at Burroughs High on Wednesday.

Burroughs finished off a season that was in perpetual limbo due to the coronavirus pandemic and its effects on statewide restrictions. After all, last year’s boys’ volleyball season was cut short as the country went into lockdown.

The Bears’ 10-match season was a by-product of uncertainty, but Burroughs coach Joel Brinton and his team were able to take the opportunity as they captured their 11th consecutive Pacific League title and sealed a first-round playoff bye.

The initial uncertainty of the season and then scramble to organize and complete one is something the team would never want to experience again.

“But if I had to, I’d want to go through it again with these guys,” said Brinton, whose team swept Valencia in the second round of the postseason. “These guys are amazing. From finding a way to make outdoor practices, to this. Just seeing them enjoy each other’s company is pretty unique and pretty cool.”

Bears senior Kade McGovern finished his career with 13 kills and a block in his final Burroughs match. He is Harvard-bound after an unprecedented year.

“I’m really happy with our season,” McGovern said. “I came into this year not thinking that I was going to get a season, so as soon as they told us two weeks before the start of the season that we were going to have one, I was like, ‘okay, let’s go.’

“All of it has been a positive. You have to take it with optimism. We didn’t have this from the start, so now, we have this great season and we went pretty far in the playoffs, I’d say. They’re a great team.”

McGovern recorded eight of his 13 kills in the second game when the Bears regrouped from a disappointing first set in which they gave up a 13-0 run to the Oilers (13-6 overall).

“[Trent Douphner] got hot and we got stuck,” said Brinton of the early first-set hole. “It happens. It’s just a really bad time to happen — in a playoff match.”

After Burroughs led 8-3 in the second set, the two exchanged leads five times before the Bears took a 23-20 advantage over the Oilers.

But the Oilers responded and rebounded late to take a two-set lead.

Huntington Beach coach Craig Pazanti said a similar experience against Thousand Oaks in the second round helped weather the storm.

“I don’t think we were really dialed in,” Pazanti said. “Our setters were a little bit frantic. I think they dialed it back in towards the end of that set – putting the ball in the right spot.”

The two teams found it hard to distance each other in the third game, but after five ties, the Bears called time out after the Oilers took a 14-12 lead.

Three quick points later blew up into a 9-0 run for a 20-12 Oilers lead before McGovern stopped the bleeding, but Huntington Beach hung on to its lead to complete the sweep.