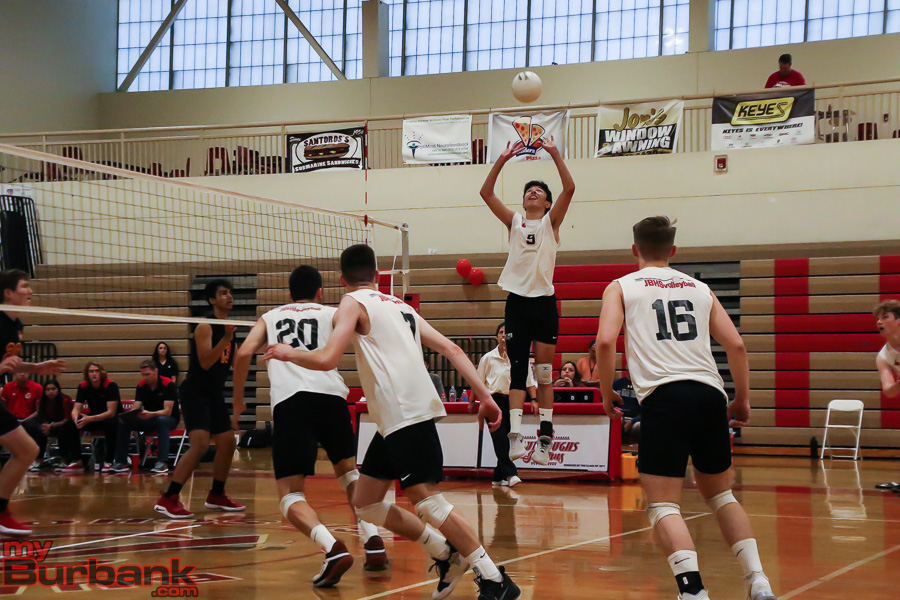 But hitting errors and service miscues were simply too much to overcome as the visiting Diablos earned a 28-26, 28-26, 26-24 victory.

In the opening set, the Indians were ahead 13-7 which forced Mission Viejo, which now owns an 11-match winning streak, to ask for time.

This is the third consecutive year that Burroughs, which captured its 10th straight Pacific League title, has fallen in the second round.

The Indians committed 19 service errors across three sets and had 17 service mistakes and hitting errors in the opening set which helped their undoing.

“We preach learning and we didn’t learn,” Burroughs coach Joel Brinton said. “So all year we’ve had an issue with finishing sets. So when we’re up 24-22, you better finish the set, especially in a playoff game.”

Burroughs’ lead swelled to 16-9 when junior middle blocker Troy Outwater and sophomore opposite hitter Kade McGovern teamed up on a block.

The Indians darted in front 17-10 on a kill from junior outside hitter Connor Burroughs.

Mission Viejo knotted it at 20-20 on a spike from senior opposite hitter Andrew Kim, who led the way for the Diablos with 19 kills, five digs and two blocks.

A tapper from Burroughs put the Indians in front 23-22 as Mission Viejo asked for a stoppage in play.

Another blast from Burroughs, who had a match-best 22 kills, handed the Indians a 24-22 edge.

One more point would secure the first set, but Kim’s kill sliced the lead to 24-23 and when Burroughs delivered a mishit, it was tied at 24-24.

The Indians weren’t done as they led 25-24 on a kill from McGovern (eight kills) only to see the Diablos level it at 25-25 on a service error by Burroughs.

After Mission Viejo moved in front 26-25 on McGovern’s mishit, the Indians tied it at 26-26 on a service error by senior setter Everado Castillo, who had three aces and three digs.

When sophomore libero Cole Kvarda’s serve hit the net it became 27-26 and Kim’s winner sewed up the game for Mission Viejo.

“We’re a team and whether we’re up by seven or down by seven we have confidence that we can always come through,” Mission Viejo coach Ryan Thurlow said. “There’s 10 seniors here. This is our year to do it. We just started to settle in and pass the volleyball. It’s a very tough place to play. Especially initially. This is a great, great program that they [Burroughs] run.”

The second game was knotted at 2-2 on an ace from senior Caleb Parham (five kills and one block).

It was tied at 4-4 on senior Chad Carter’s errant serve and 6-6 when Burroughs hit the net.

Mission Viejo settled in and led 11-7 on back-to-back winners from Kim. The Diablos moved ahead 13-9 on a tapper from Carter (two digs and two kills).

The Indians then outscored the Diablos 5-1 and tied it at 14-14 on a kill from Burroughs.

A service ace from sophomore setter Carter Cottrell made it 15-14, but it was deadlocked at 15-15 on a mishit from Cottrell.

Mission Viejo dashed in front 20-18 as the Indians, who swept Notre Dame in the opening round on Tuesday, asked for a break in the action.

It was knotted at 22-22 on a kill from Kim and when senior Colin O’Brien (six kills and five blocks) tossed in a stuff, the Diablos moved ahead 23-22.

It was even at 24-24 on a kill from Burroughs and level at 25-25 on a tapper from senior outside hitter Luke Kvarda.

Kim’s laser made it 26-25, Kim’s winner pushed Mission Viejo’s advantage to 27-26 and when Kim added one final dagger, the Diablos grabbed the second set.

“There are two words that I tell my guys and everything in life and that’s clutch up,” Thurlow said. “You gotta know that you want the ball. The difference tonight was we wanted the ball when it was 25-25. We wanted to pass it. We wanted to serve it and we wanted to spike it.”

The Diablos seized control 4-1 in the third frame when a hit from Burroughs went out of bounds as the Indians asked for time.

Mission Viejo forged ahead 9-5 on a block from Parham and it became 10-6 on Kim’s kill. The Indians inched within 12-9 on a blast from Burroughs and 14-11 on McGovern’s dagger.

When Kim’s rocket sailed out of bounds, the Indians drew within 14-13 as the Diablos requested time.

O’Brien’s tapper gave Mission Viejo a 15-13 cushion, but the Indians then raced ahead 20-18 on Kim’s mishit.

Kim had consecutive winners that evened it at 20-20, but a hammer from senior middle blocker Jagger Green (seven kills) leveled it at 21-21.

“I think we beat ourselves up a lot,” said senior libero Sam Tipton, who had 16 digs. “Even when we’re up by one, up by two, I think we’re always in control, but it’s either we don’t make a pass for ourselves or that our sets are too far out. I think it’s the errors. We had about 45 unforced errors. A lot of those came later in the games.”

Tipton, who will attend Grand Canyon University and try to walk-on, added: “I think it comes down to self discipline,” he said. “Especially later in the game, I think we played out of character. We preach high, hard and deep and then we saw them swinging really low.”

The final two points came on a tapper from Parham and a kill from Kim that sealed the game and match.

Senior setter Steven Grandinetti finished with 24 assists for the Indians.