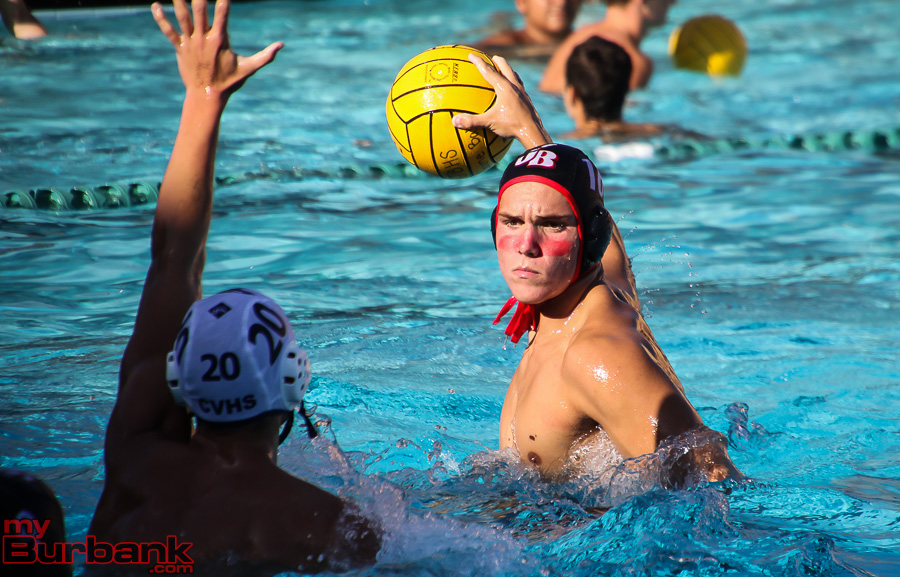 One objective that Jacob Cook, the Burroughs High boys’ water polo coach wanted his team to accomplish was get off to a productive start in Thursday’s Pacific League match against visiting Crescenta Valley.

This is exactly what happened as a six-goal, first-quarter outburst allowed the Indians to waltz past the Falcons 13-6 behind five goals each from senior attacker Chet Conlan and senior utility Vahagan Sahakyan.

“We capitalized on a lot of opportunities,” Burroughs coach Jacob Cook said. “They came out aggressive. We didn’t come out too hard against Glendale on Tuesday. We made sure we came out hard and didn’t play catchup.”

Conlan tallied two goals and Sahakyan knocked in three in the initial frame as Burroughs (8-5 and 1-1 in league) took control 6-1 entering the second period.

“I think we’re doing well. We have a lot of potential,” Cook said of his squad, which can score goals in a hurry. “We have threats everywhere. We want to be league champs and that’s the goal.”

With this kind of cushion it was seemingly going to be real tough for the young Falcons to rally.

“Burroughs did a good job of coming out, playing good press defense, our drivers were not getting open and then offensively Burroughs did a good job of being assertive,” Crescenta Valley coach Jan Sakonju said. “They got goals out of the center and they got good outside shots and it was a good offensive attack on their part which is why at the end of the first quarter there was such a point differential.”

Sakonju also thinks that the Falcons are going to be much better in the future.

“Burroughs beat us pretty decisively today, but it was a good learning experience for us,” he said.

The period commenced with senior center Matthew Mucha scoring on a 10-foot rocket with 6:18 left for a 1-0 lead.

When Conlan drilled home a six-footer with 5:35 left on the timer, the Indians’ lead swelled to 2-1.

Sahakyan’s laser from six feet, thirty seconds later, made it 3-1 and Conlan’s eight-foot bullet with 3:23 showing pushed Burroughs’ margin to 4-1.

A winner from eight feet by Sahakyan with 1:47 remaining handed the Indians a 5-1 advantage.

Each team scored two goals in the second quarter, including senior utility Ryan Jaramillo’s five-meter penalty attempt with 3:51 left on the clock that saw Burroughs pull ahead 7-1.

Conlan’s six-footer with 38 seconds showing in the opening half gave Burroughs an 8-2 edge.

The third quarter was likewise even as both squads scored three goals that included Conlan’s 10-footer with four minutes left as the Indians darted ahead 9-4.

Sahakyan’s eight-footer with 2:41 remaining made it 10-5 and Sahakyan’s five-meter penalty toss with 12 seconds left allowed the Indians to glide ahead 11-6.

Burroughs tacked on two insurance goals in the fourth period when Jaramillo scored from 10 feet with 6:04 left for a 12-6 advantage.

Conlan closed out the offensive festivities for the Indians with a six-footer and 2:49 showing for a seven-goal lead.

George Saroyan led the way for the Falcons (6-10 and 1-1 in league) with three goals and Saroyan’s six-foot cannon shot with 5:51 remaining in the first quarter evened it at 1-1.

When Saroyan found the back of the net from eight feet and 1:18 left in the second period, Crescenta Valley drew within 7-2.

Saroyan’s five-meter penalty throw with 2:49 left in the third quarter sliced the Indians’ lead to 9-5.

A point-blank toss from Jacob Choe with 38 seconds showing in the second quarter saw the Falcons get within 8-2.

Charlie Ward’s 16-footer with 5:03 left in the third stanza shaved the Indians’ edge to 8-4 and when Alden Marriott scored from eight feet with 44 seconds left in the same frame, Burroughs’ lead was reduced to 10-5.

The Indians outshot the Falcons 15-12 in the first half and 29-22 overall, and Burroughs goalies, senior Arthur Eldridge and senior David Karagezyan, turned away multiple shots and played exceedingly well.