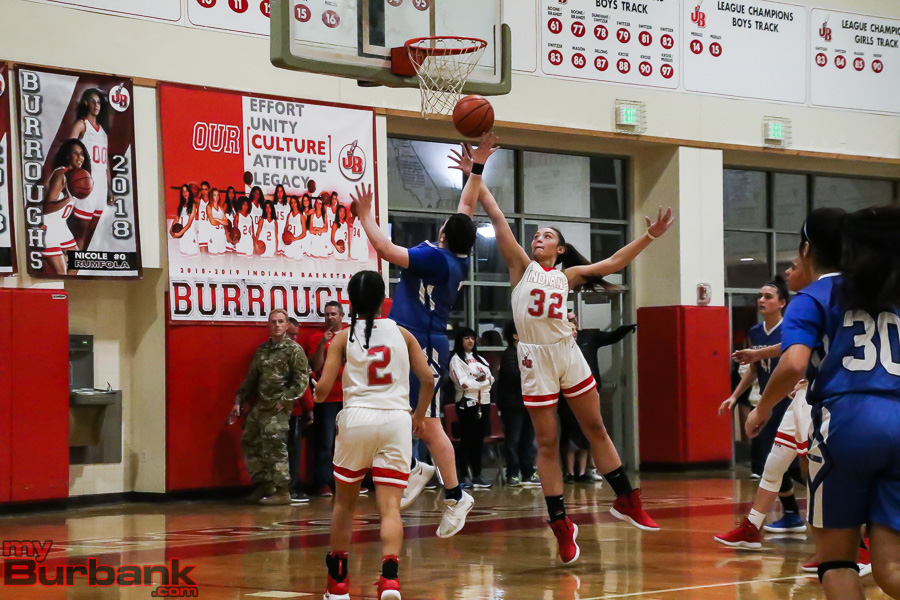 At least recently, the Burroughs High girls’ basketball team has been the dominant force in the Pacific League, having won numerous banners under the leadership of longtime coach Vicky Oganyan.

Meanwhile, city rival Burbank has also produced some fine teams and has usually ended up in the top half of the league.

Both should be contenders for the league title this season, but Pasadena, which finished in a three-way tie for first place along with Burroughs and Crescenta Valley, might very well be the front-runner.

The Indians, who were 21-8 overall and 10-4 in league a season ago, are still plenty potent.

“My expectations are to stay focused on the task ahead, play hard one play at a time, work together and get better individually and as a team as the season progresses,” said Ognayan, who saw the Indians lose to Walnut 43-38 in a CIF Southern Section Division II AA opening-round playoff match.

Oganyan, who played at Glendale High, has more than enough weapons at her disposal.

“Faith Boulanger, Dyani Del Castillo and Kayla Wrobel are all returning all-league players who we are going to count on to lead the way,” she said. “All three have experience and know what it takes to be successful at the varsity level.”

Boulanger is a 6-foot-1 junior center/forward, who can score from anywhere on the court and also collect rebounds.

Boulanger averaged 15 points and nearly eight boards for the Indians, who will visit Burbank on January 10 and host the Bulldogs on February 6.

Del Castillo (5-8) is a junior point guard with slick ball-handling skills, while Wrobel (5-11) is a junior power forward, who can score and grab rebounds.

The available sophomores are Stephanie Wilson (5-4), a point guard, Noor Fahs (5-9), a small forward and Sarai Waddell (5-6), a shooting guard.

Jett Del Mundo is in his first season as coach of the Bulldogs, but has a quarter century of leading girls’ hoop programs, including Pasadena.

“My overall expectations for this group is to play better basketball, better team basketball than we did a season ago,” he said. “We won games because of our talent, but now we need to win games because we compete.”

Del Mundo then added: “We put a lot of hard work in the summer,” he noted. “They in turn wanted to participate in fall ball at Pasadena City College. I think we’re ready to start a new season and do better than a season ago.”

Del Mundo, a graduate of USC, feels confident that his team will have a productive season despite the graduation of highly-decorated power forward Osanna Tirityan, who did virtually everything on the floor.

Tirityan, an All-CIF selection, led the Bulldogs in multiple categories including points and rebounds.

Burbank finished last season with a 15-13 mark and 6-8 in league for fifth place, and didn’t get an at-large bid for the postseason tournament.

Also gone to graduation is starter Sofia Aslanyan. Track star Jayla Flowers decided to dedicated herself to her best sport.

Two upper classmen are starters and includes Bri Castro, a gifted shooting guard and long-range shooter who is the only returning starter.

The other is center Adelina Bandarian, who will be asked to rebound and play defense, but can also put the ball in the hole.

“I’m approaching it like we can win hopefully every game,” Castro said. “But we have to play as a team and pass the ball. Last year I was mainly just a spot-up shooter. I want to be an all-around player. I want to drive to the basket more.”

What are some of Castro’s goals? “I kind of want to be all-league and I want to score more than 12 points a game,” she said.

Junior Kim Pimentel is also a starter and the point guard and captain and will have the ball in her hands a great deal.

Del Mundo will employ a three-guard offense, so the other backcourt starter will be sophomore Christina Ohanians.

Senior Khyla Lipscomb is the starting small forward, and ready to step in and contribute and so is freshman power forward Karen Casillas.