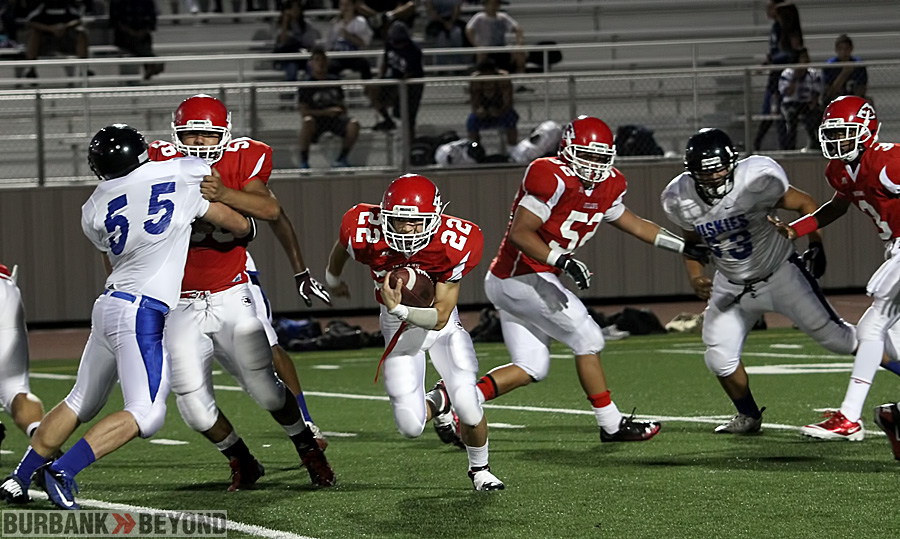 Football is a game of inches. It’s an old adage in the sport but an accurate one. Friday night’s game between Burroughs and North Hollywood came down to two plays and both went in favor of the Huskies. As a result, so did the game. North Hollywood outlasted Burroughs in a penalty-filled contest, 19-14, at Memorial Field.

Trailing 14-12 mid-way through the fourth quarter, North Hollywood rallied for the victory by completing a 73-yard touchdown drive with two key fourth down conversions.

Facing fourth and one on the Indians four-yard line, the Huskies’ Cullen Englund ran a quarterback sneak that made a first down by a half-inch or the nose of the football.

With precious time ticking away, North Hollywood unsuccessfully tried to score on its first three attempts from three yards out. Facing fourth and goal, the Huskies elected to go for it and forego a potential game-winning field goal.

After holding their own on a spirited goal line stand, the Indians couldn’t get the final stop they needed as Englund snuck in from inches out to give the Huskies the lead for the first time with 1:57 remaining.

One final drive by Burroughs was thwarted when cornerback Antoine Taylor intercepted a desperation pass by Indians quarterback Oharjee Brown.

Mere inches left the Indians frustrated and a 0-2 start to the season.

“We should have beaten them, 48-0,” Burroughs Coach Keith Knoop said. “We lose 19-14 because we can’t capitalize on situations, we get turnovers, then we get penalties and gave up a big pass play. We’re young and it shows. We are super young.”

The game started on a positive note for JBHS when the Indians recovered a fumble on the opening kickoff on the Huskies 24-yard line. Four plays later Israel Montes scored on an eight-yard run to give Burroughs an early 7-0 advantage.

The lead was extended to 14-0 at the half when Brown connected with Jonathan Fuentes on a six-yard touchdown pass with 4:35 left in the second quarter. Brown set up the score with a 34-yard pass to Conor Joyce.

Brown began the season as the team’s top wide receiver. But injuries to starting quarterback Andrew Williams and back-up Angel Manzanero in last week’s loss to Paraclete gave Brown the nod against the Huskies.

“I thought he did a great job tonight,” Knoop said of Brown. “He’s a receiver playing quarterback. I think he put a little bit of pressure on himself. He didn’t want to let the team down. He’s a competitor.”

North Hollywood mounted its comeback in the third quarter when Jonathan Weeks intercepted a Williams’ pass at the Husky 20-yard line and returned it into Indians territory to the 38. The Huskies punched it in from one yard out on another quarterback sneak by Englund to make it 14-6. The ensuing extra point was wide left.

After stopping Burroughs on downs at midfield, North Hollywood came right back behind the passing of Englund. A 40-yard pass from Englund to Elia Petrosyan followed by a 10-yard touchdown strike to Luis Meza cut the Indians lead to 14-12 with 2:07 left in the third quarter. The Huskies couldn’t convert the two-point conversion.

Englund sparked the game-winning drive on a 43-yard pass to Weeks who out-jumped the Indians defender by inches to grasp the catch. Moments later North Hollywood (1-2) found a way to win its first game of the season by making the biggest of plays by the smallest of margins.

Burroughs struggled the majority of the second half with penalties and turnovers. Lost in the defeat was a stellar performance by the Indians defense.

Brown completed seven of 13 passes for 77 yards, including three to Joyce for 50 yards. Montes rushed for 64 yards on 17 carries.

Englund finished nine of 13 for 132 yards for the Huskies.

Burroughs travels to Camarillo next Friday for its final non-league game before returning home and facing fellow co-defending league champion Arcadia in a huge Pacific League matchup on September 21.

“Once we get our quarterbacks back and we get him (Brown) back to receiver, we will be a better team,” Knoop said.