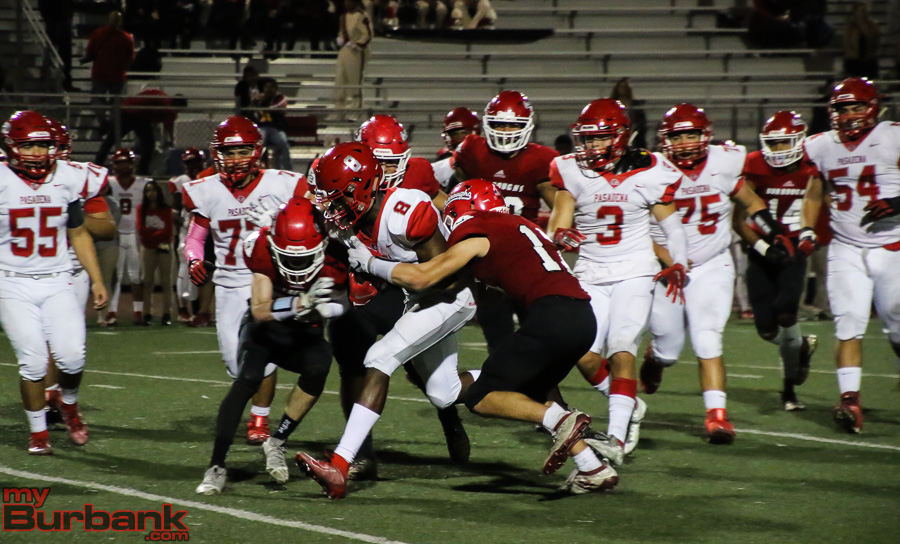 Too many costly turnovers and missed tackles in open space ruined any chance that the Burroughs High football team had of defeating Pasadena on Friday night at Memorial Field.

The end result was a 41-21 victory by the Bulldogs over the Indians in a Pacific League match.

Late in the contest, Burroughs senior quarterback Nicholas Garcia was hit fairly hard while trying to throw and was on the ground for several minutes.

Garcia, who tossed three scoring passes, also unloaded four interceptions, including one in the end zone, was wearing a sling over his right shoulder.

It is not known whether Garcia will be able to play in next week’s game at Arcadia.

“At the end of the day, it just comes down to effort in practice and that’s what we talk about all the time,” said one-time Burroughs wide receiver and current wide receivers coach Erick Hernandez. “We struggle to give a look against teams like Pasadena, CV and Muir. We’ve just gotta do better. We just gotta respond. Go harder, do more.”

Hernandez added: “There’s positive plays. I think you can positives in everything,” he said. “Obviously we had some good drives and we put some points up a little bit. Those are good points. At the end of the day, that doesn’t matter. You gotta put a whole act together to get it done and we’ve just fallen off. We’ve got to keep tugging, keep pushing and that’s it.”

The Bulldogs led 14-0 at the end of the quarter, but the Indians struck for a touchdown with 3:33 left to make it 14-7 before the intermission.

Garcia drove Burroughs 80 yards which consumed 11 plays and the capper was an eight-yard toss to sophomore running back Jon English.

Burroughs (5-3 and 1-3 in league) sliced Pasadena’s lead to 21-14 when Garcia unloaded his second scoring pass, a 22-yarder to sophomore wide receiver John Alajijian (43 yards on four catches) with 1:05 remaining in the second quarter.

This scoring march began at the Burroughs 35-yard line and consumed six plays.

The Indians, after a 5-0 start, have lost three straight games, then scored their final touchdown on a 22-yard strike from Garcia (18 of 35 for 216 yards) to senior wide receiver Aiden Forrester (100 yards on five receptions) with 2:55 left in the game that cut Pasadena’s lead to 34-21.

Garcia drove the Indians from the Pasadena 41-yard line and used three plays, and it was on this throw that he injured his shoulder.

English (64 yards on 18 carries and 43 yards on five receptions) was warming up and played quarterback on the Indians’ final drive, completing two of three passes for 19 yards.

Pasadena (5-2 and 2-2 in league) possess quick-score ability and it was on display several times against Burroughs (349 total net yards).

It wasn’t on the Bulldogs’ initial score as it took nine plays to move 75 yards, and Pasadena found the end zone when sophomore wide receiver Mekhi Fox (40 yards on five rushes) scooted around right end for three yards with 3:57 left in the first quarter for a 7-0 lead.

After Garcia was intercepted in the end zone on first down and the ball at the Pasadena 10-yard line, the Bulldogs required two plays and 70 yards in order to take a 14-0 lead when senior wide receiver Jahrique Lowe raced 55 yards at the end of the first quarter to make it 14-0.

It took three plays to traverse 53 yards after a pooch kick as the Bulldogs (439 total yards) bolted ahead 21-7 with the capper an eight-yard blast from Fox with 2:01 left before halftime.

After two plays, Pasadena led 27-14 as junior quarterback Dante Coronel (eight of 17 for 225 yards) found Lowe with an 80-yard screen pass and 35.2 seconds left before the break.

The Bulldogs located pay dirt when they drove from the Burroughs 34-yard line and needed five plays as Coronel hit senior wide receiver Akil Andrews with a 15-yard strike and 8:30 remaining in the third quarter for a 34-14 edge.

The tally was made possible after Garcia was intercepted on second and 13 from the Burroughs 29-yard line.